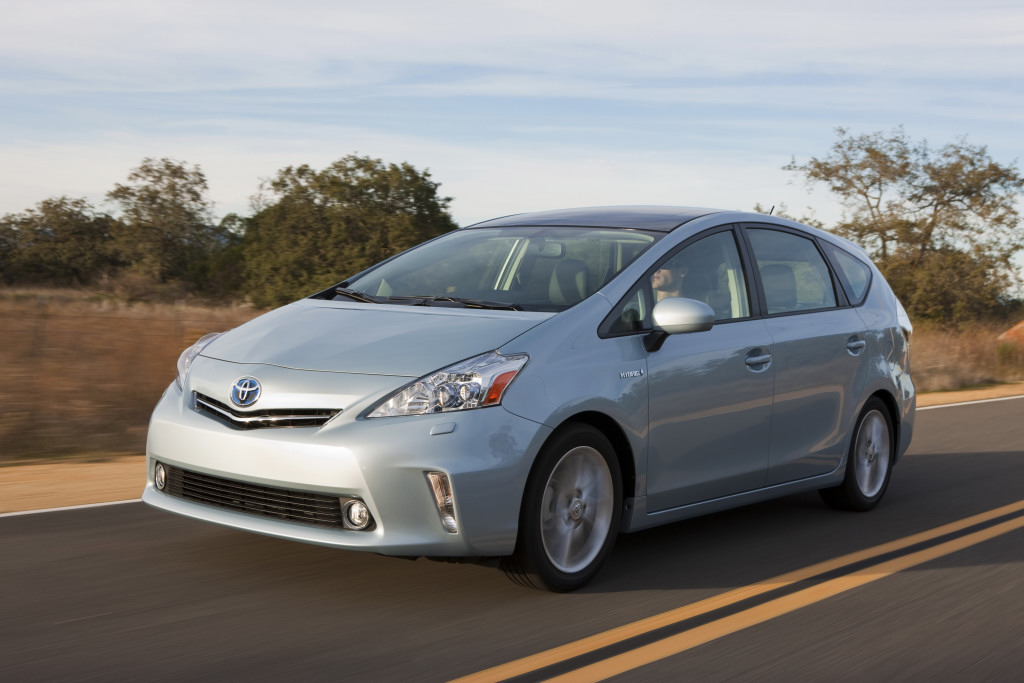 As of today, there’s no question that the Prius V wins within its small market segment. Of course that conclusion is helped along greatly by the fact that it basically has this sliver of the market—a very high-mpg small wagon—to itself.
The true competitive set is exactly one vehicle (unless you count the standard Prius as part of the mix, and I almost do): the Volkswagen Jetta Sportwagen TDI. The binary segment does allow for a fairly neat division of the driving world, into those who care about the driving experience, and those who care about practicality and fuel economy. The Jetta has at its core a torquey powerplant, a manual transmission to choose, and the geeky-cool factor of a European station wagon (certainly not everyone’s cup of tea). The Prius V meanwhile, offers a completely fuss-free driving experience (quiet, comfortable, with light-as-air controls), lots of thought put into the user interface, and class-leading fuel economy. Let’s face it, if you’re a shopper of either one of these cars, you more than likely have different car values than most people, and a pretty strong point of view about what’s “good” in a vehicle—you certainly won’t have any trouble knowing if you’re a Prius or a TDI type of a person.
With that as background, I can’t help but see the Jetta as anything less than a real compromise when compared with the Prius V. The V has more space (why you shop for a wagon in the first place), better fuel economy (why you’d consider either a hybrid or a diesel), wins on most of the other metrics (reliability rankings, resale value, etc), and costs about the same as the TDI. Just as certainly, I can proclaim that I would always choose to drive the Volkswagen over the Toyota, because it’s so much more dynamically interesting to pilot.
—Seyth Miersma, Editor-In-Chief
I’d rather drive the VW than the Toyota any day of the week, but the fact remains that I’m not the one shopping for a small utility vehicle
When I decided to take the Prius V over our long Christmas weekend, I thought, “This is great; I’ll save gas, and will have room for any extra stuff I pick up along the way.” I was right about the room. The V has a lot of it, and I was able to haul home a load of empty cardboard boxes to reuse, on top of my regular luggage, and that of my wife. Plus, I’ve driven the standard Prius, and while not very engaging, it was comfortable, and had its charms.
The Prius V claims EPA mpg ratings of 44 city and 40 highway. During my holiday with the V, I was unable to come even close to that. The highest I saw was about 37.5 mpg average, which dropped steadily the more I drove on the highway. It didn’t matter if the car was free of any other passengers or cargo—it just wouldn’t do it. I feel like the only way I could have approached the 40-mpg highway figure would have been to drive very slowly, and who wants to do that?
In the standard Prius, I have found myself enjoying the interior design and instrumentation. The V, though, is different. The gauges are all housed in a cluster in the center of the dash, rather than far to the left, in front of the driver. I’d say I appreciate the extra inch of visibility it affords, but I don’t. I’d rather have that information right in front of me, so I can easily keep my eyes on the road when I check my speed or battery charge.
Needless to say, I wasn’t sad to give up the keys to the Prius V after my time with it.
—John Beltz Snyder, Senior Editor
My first impression after driving our Toyota Prius V tester was how much more comfortable I felt behind the wheel. This larger body style made for a cabin that felt much more spacious and accommodating to someone over six feet. The added glass space also gave a much more airy feeling, and the lack of a horizontally split rear window was a boon to rear visibility.
Sitting in the driver’s seat, you won’t mistake the cabin for anything but a Prius. The small dash-mounted shift knob is there, along with the center-mounted gauge cluster. In the V though, it’s surrounded by silver-painted plastic, which actually looks and feels quite good, and fits with the overall look of the cabin. The center stack, which contains all the infotainment and HVAC controls looks quite classy in person. Away from the dash, the materials in the Prius V felt less plasticky in general. I can only hope these changes will eventually carry over to the standard car.
The Prius isn’t likely to become a truly dynamic car anytime soon, but with the V, it feels like a vehicle that’s moving upmarket, with nicer controls, an overall higher quality feel, and a more comfortable experience in general.
—Brandon Turkus, Online Editor
Pros
Cabin refinements take the Prius brand slightly up market
Better rear visibility than the standard Prius
A really great combination of usable space, and fuel economy ratings
Cons
It’s taller overall, and therefore feels more prone to roll through the bends
Hard to achieve fuel economy claims
Light controls, low-powered engine, and small overall amounts of feedback make this the anti-driver’s car.
Tags:
car valuesJettapriusTDIToyotaVolkswagen

Base Versus Loaded: 2013 Ford Escape