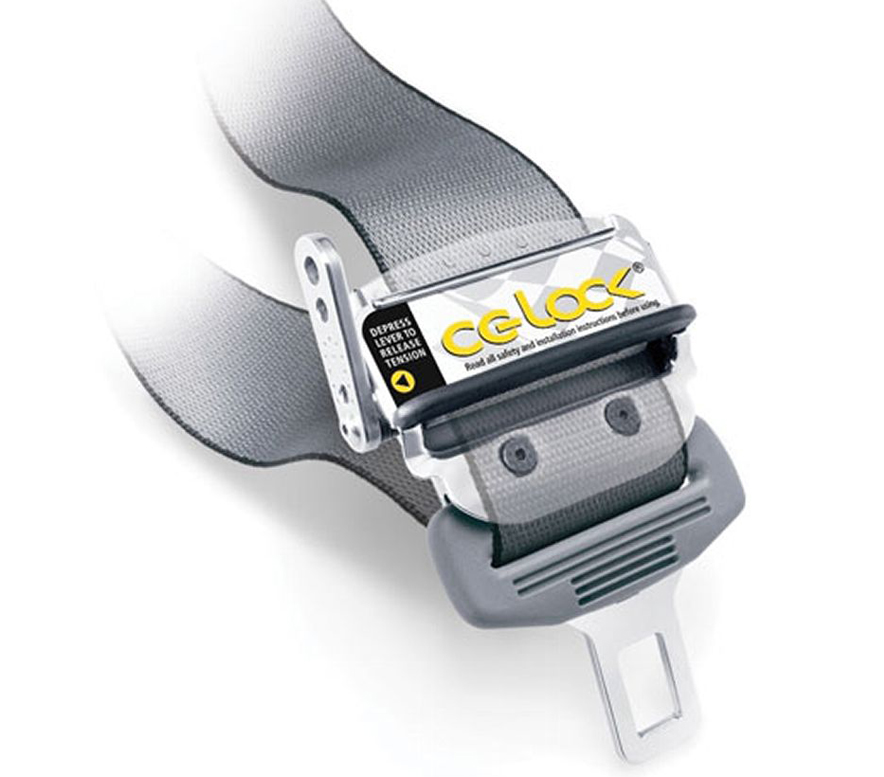 When Bruce Mather invented the CG-Lock, he was just trying to keep himself firmly in his seat at track days. Since then, it has become sought after by enthusiasts, performance driving instructors, police officers, off-road drivers, parents, people with bad backs, and drivers just looking for a little added support or safety. It was used by stunt drivers in the James Bond film, Quantum Of Solace, and on the TV show Top Gear.
Bruce Mather calls it “the lowest-cost performance part you can buy.”
CG-Lock (CG stands for Center of Gravity) is a fairly simple device that attaches to your seatbelt, and can be installed in just a few minutes. It acts to keep your seatbelt tight, which holds the driver or passenger firmly in place. At about $60, it costs a lot less than a racing harness, and is still comfortable and easy to use when taking grandma to the grocery store or driving clients to lunch.
It offers about 80 percent of the holding power of a racing harness. With the driver held firmly in place, he or she has much better control over the vehicle, making it much easier to drive quickly and precisely. Let’s face it, it’s tough to exercise a light grip on the wheel when you’re holding onto it to keep your butt in the seat. It also increases the amount of feedback you get from the car, and reduces driver fatigue. This shaves time off your laps, often about one or two seconds (Redline Magazine [August 2008] confirmed this in its own tests [PDF]). The CG-Lock guarantees faster lap times, or you get your money back.
In addition to making your hot laps faster and more comfortable, CG-Lock also makes them safer. In a frontal crash, you don’t wait those precious moments for the seatbelt pretensioner to activate, so forces to your body are applied over a longer period of time, reducing injury. In a side impact, it helps keep your hips from hitting the door. It a rollover crash, it keeps your head away from the ceiling of your vehicle, which is exactly what makes this type of accident so deadly. At the track, or on the highway, CG-Lock improves your chances of surviving and walking away without injury.
Faster laps, increased safety, and all for about the price of a tank of gas? We’re rethinking installing harnesses in our daily driver.
The man himself explains the CG-Lock pretty well in the video below.
UPDATE: We have had the chance to try out the CG-Lock, and can confirm this: it’s great!
For one, it really keeps your hips in place under hard cornering, and it feels as though the driver is far less affected by lateral g forces. This makes cornering—particularly stitching corners together—much easier and far less dramatic.
The second huge benefit to the CG-Lock is that you feel more connected to the car. Having your butt firmly pinned to the seat means more direct and more continuous feedback.
Without the distraction of trying to hold yourself in place, you have more mental bandwidth to focus on what you’re doing and what is going on between car and road. In our test, this meant better gauging the car’s limits and our proximity to them.
Furthermore, it was simple to install, taking just a couple minutes (the CG-Lock comes with the sole tool you need to attach it—a small hex wrench). It’s also easy to deactivate (with a built-in lever) essentially turning it back into a normal seatbelt on demand.
Get your CG-Lock in the Winding Road Racing store.
Tags:
daily driver