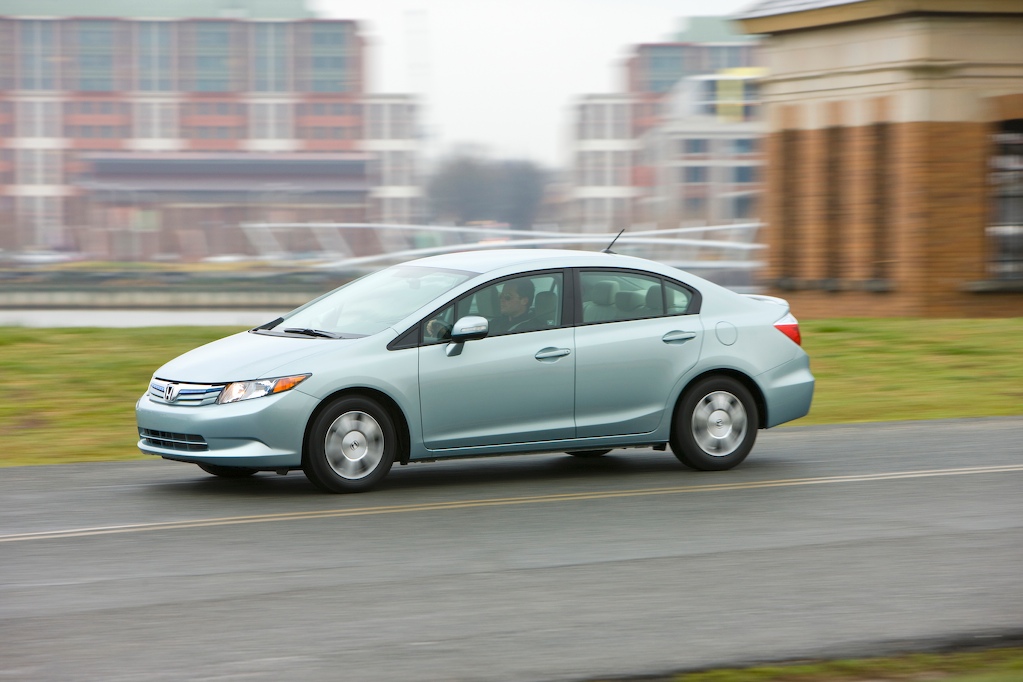 —Saline, Michigan
We recently drove the new Honda Civic lineup, and came away with a basic sense of what the car was like and how it had evolved. That trip, however, covered the whole Civic range, and with a limited amount of time, we had to focus mostly on a couple specific models, while giving the Hybrid only a cursory appraisal. Luckily, we managed to get the 2012 Civic Hybrid in at our Michigan office for some extended time in the vehicle.
The interior of the Civic Hybrid felt pretty average. Our tester came with leather upholstery, which makes it a little nicer than the base car, but overall, materials were pretty modest—not particularly bad, but we saw or felt gave impressions of high quality or refinement. We liked the cluster display, and the colors fading from blue to green as we drove more economically helped us manage of fuel use. The Hybrid even gave us an “Eco Score” whenever we were done driving it, displayed as a number of plants, some with more leaves than others. Alas, we never scored too highly, even when we tried.
The car has different driving modes, but they are not selected via any sort of dial. An “Econ” button to the left of the steering wheel dulls down the throttle response, and keeps the revs from soaring too high. Obviously, acceleration is lessened with this button pressed, and getting up to speed after a stop took quite a bit longer. The driver can also put the transmission into sport mode, which allows the continuously variable transmission to rev more freely. This was especially helpful in town, where we came across stop signs, traffic lights, and other obstacles creating a stop-and-go driving environment.
But, even in with the gear lever set to “S,” the Hybrid is not a particularly sporty car. With only 110 horsepower and 127 pound feet of torque, it takes a bit to get up to speed, and we found ourselves mashing the pedal to keep up with traffic. The little 1.5-liter four-banger didn’t sing a particularly tuneful or exciting song. When accelerating, and especially with the transmission set to sport, the CVT kept the rpms in a noisy, droning part of the rev band as it worked to build speed. Even though wide-open-throttle acceleration was acceptable, the amount of exertion on the part of the powertrain really revealed the car’s low-powered, economical nature.
In addition, the lack of steering feel draws down the level of engagement quite a bit. The tiller was light, and not very direct. It didn’t feel direct, and, at speed, turning of the steering wheel wasn’t met with what felt like the proper amount of response from the front wheels. Also, the car wasn’t super stable on the highway, and the lightness of the steering meant we were making exaggerated motions to correct it. In the city, though, this was much more easily managed, and once we got the hang of the steering, the Civic seemed plenty capable at turning in and bending corners. We actually were able to have a bit of fun driving around town, where the Hybrid felt more at home.
The Civic Hybrid showed a particularly amazing lack of lateral grip. As we drove along a two-lane highway, we encountered several long curves—not the kind that warrant a yellow sign with a suggested speed. Taking them at the speed limit (as was the rest of traffic), we heard the low-rolling-resistance tires squealing beneath us on several occasions. It didn’t take a lot of g-forces to challenge the traction of the rubber, which meant, we weren’t going to be setting any records on our favorite handling roads.
But, as an economical car, the Civic Hybrid does quite well. The stop/start function worked well. The car quickly shut of the engine when we came to a stop, and started back up instantly and smoothly in less than the time it took to move our right foot from the brake to the accelerator. We lacked the patience to let it conserve fuel while it got up to speed, so we had a bit of trouble realizing the 44-mpg fuel economy rating, but hose without leaden feet should likely be pleased with the money they’ll save on fuel. Unfortunately, there was no was to manually put the Civic into EV mode, which takes away a lot of the fun of driving a hybrid in the first place.
VS: Hyundai Sonata Hybrid
For just $745 more than the base Civic Hybrid, you can move up a class into the larger Hyundai Sonata Hybrid, which is a real value. It offers over 200 combined horsepower to start. Sure, its 35/40-mpg pale in comparison to the Civic’s 44/44, but it also doesn’t feel like you’re dragging an anchor behind the car. Plus, Hyundai does a real nice job with the interior. The design is fresher, the materials nicer, and the instrumentation and navigation system are really attractive. The Sonata’s six-speed automatic (no CVT!) sweetens the deal a bit. It’s soft suspension, however, does not.
VS: Toyota Prius
For about $500 less than the Civic Hybrid, you can get into the ever-so-popular Prius. Sure, the Toyota is slow, boring, and isolated, but it is also the fuel economy champion, at 51/48 mpg. The Honda isn’t significantly better in terms of driving dynamics, and the Prius’s interior definitely feels more refined, attractive, and upscale. We wouldn’t be surprised if many buyers passed over the Civic’s shred of driver engagement for the green cred and comfort of the established Toyota.
2012 Honda Civic Hybrid
Engine: Inline-4 and electric motor, 1.5 liters, 8v
Output: 110 hp/127 lb-ft
Weight: 2853 lb
Fuel Economy, City/Hwy: 44/44
Base Price: $24,050
On Sale: Now
Tags:
Hondahonda civicHybridHyundaiToyota