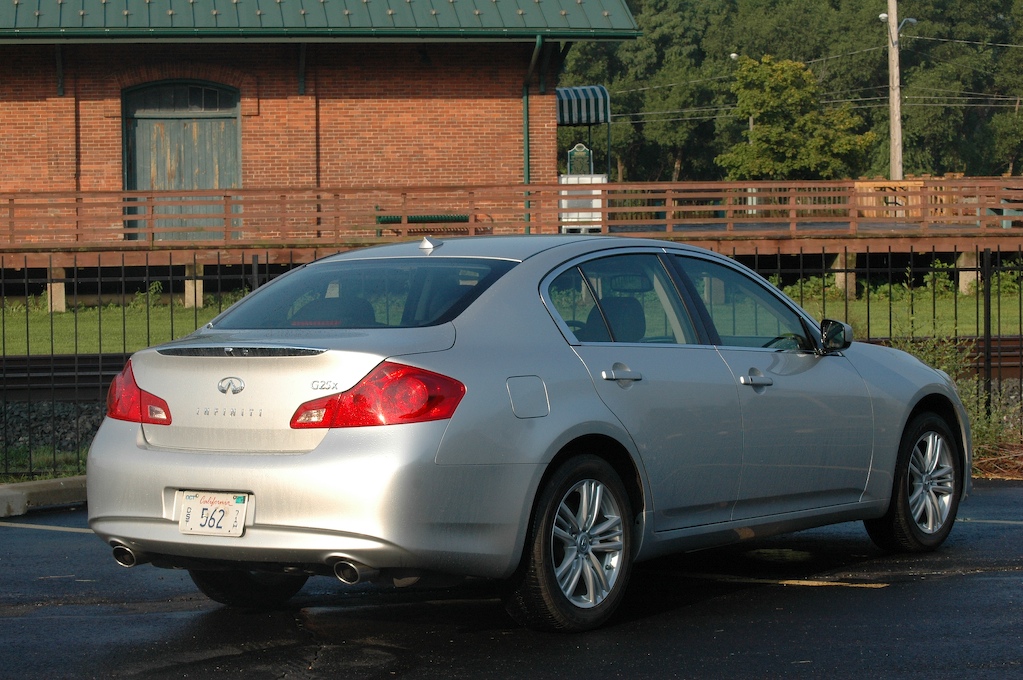 We reported briefly on Infiniti’s entry-class G sedan last fall, when Rex Roy drove the rear-drive G25 in close proximity to the range-topping IPL G Coupe. As is often the case when two similar, yet critically different, cars are driven back to back, we found the G25 to be lacking in urge, if still respectable in the handling department. Given the gap in time from that reporting until now, and the fact that Infiniti delivered its all-wheel-drive G25 to our offices this week, we thought a double dip was fully in order.

Considering its wealth of options—our G25x came complete with most of the bells and whistles that are available to the model—this Infiniti sedan does seem to offer a solid value versus premium competitors. The AWD Infiniti is several thousand dollars cheaper than BMW’s 328i xDrive, and Lexus’ IS250 AWD, for instance. The turbo-four-equipped Saab 9-3 XWD undercuts the G25x by around $2500, though, and would make for an interesting competitor, as would the barely cheaper Audi A4 2.0T Quattro.

Still, the smaller-powered G doesn’t scrimp too much versus its G37 brothers, and our car had all of the eight-way-adjustable seats, a seven-inch display screen with back-up camera, xenon headlights, etc., that you’d expect from a premium compact sedan.

Cabin materials, finishes, and touch points all feel “about right” for the competitive set. Based on design preference, we may not pick the G25’s cabin over that of some of its competitors, but that would be a purely subjective styling decision. Said another way: if there were some equitable way to measure and add up all of the metal, leather, and soft-touch surfaces of the Infiniti relative to the premium German/Japanese competition, we think they’d come out about even. That doesn’t address styling preference, but “eye of the beholder” is hardly a science.

On the road the G25x does quickly (but slowly) get outpaced by our historical knowledge of the G37 sedan. The 2.5-liter V-6 actually sounds quite wonderful when climbing the rev ladder—a sonorous but subdued interpolation of the 370Z cousin—but it simply doesn’t have the power to keep up with the outright beastly G37. Low-end power feels outright lacking, not helped, we’re sure, by the 200-odd pounds added to the G25 by its all-wheel-drive system, with the mid-range feeling decidedly stronger but not potent. With just 218 horsepower and, critically, 187 pound-feet of torque, the G25x could regularly have its lunch money taken by sub-$30K sedans like the Kia Optima Turbo—not that you’ll be drag racing.

The G25x is a willing dance partner, if a bit stiffer in the bendy bits than its rear-drive counterpart. On a decent road, we had quite a bit of fun maintaining our speed through tight corners, with steering that’s pretty direct and mildly talkative. Overall grip was good, as you’d expect, but that’s counterbalanced by a slight reluctance to turn in immediately, and slower rotation than we’d like. Certainly there was none of the flingy goodness that we sometimes love from talented rear-wheel-drive sedans. Still the overall impression is that of a fun car to drive.

Ultimately though, the G25x just occupies a weird space in the universe as far as we’re concerned. The lighter, more agile rear-drive G25 seems like the best value in the G world, starting at $3000 below the AWD car’s MSRP, and is more fun to drive, too. The much more powerful G37x is only $2400 more dear to start, and really does transform the sedan into an enthusiast-forward vehicle.

Truly, this Lexus seems to be the target that Infiniti was shooting at when it came time to create the G25x. Here the Infiniti makes the most sense, with a more entertaining overall package, a power/torque advantage, and a price advantage versus the Lexus. The IS will appeal to those shoppers concentrating on an easy-to-use, hassle-free driving experience, but it’s clear that the Infiniti has more soul.

Forget that the Infiniti has two extra cylinders and a half-liter of displacement on the A4, the Audi is far more powerful and feels faster on the road thanks to buckets more torque. What’s more, while we actually quite like the Infiniti seven-speed automatic, the Audi has an eight-speed transmission, and better fuel economy, too. Hard to argue with the four rings in this paper fight.