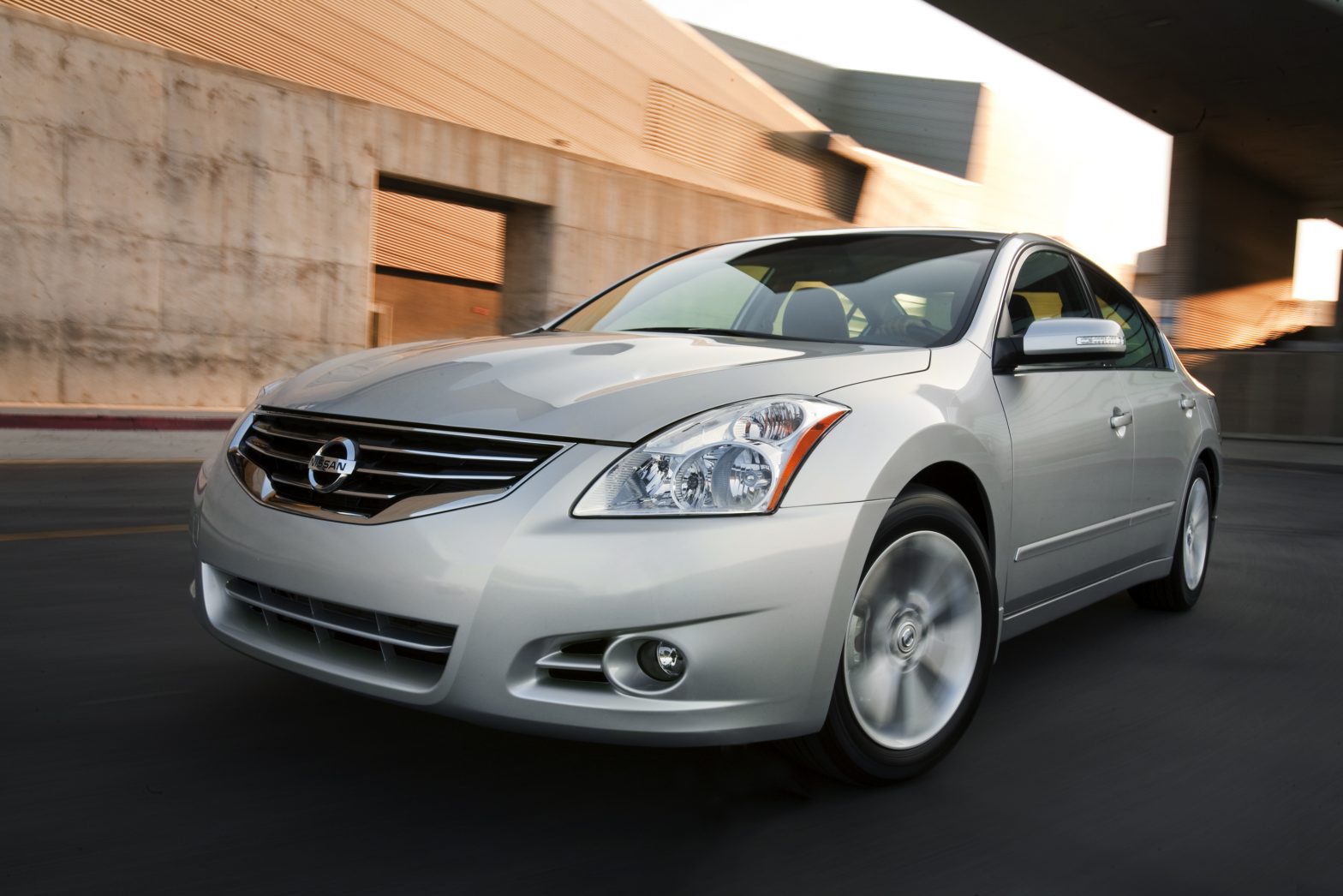 —Ypsilanti, Michigan
Earlier this year, we had the chance to get behind the wheel of part of Nissan’s refreshed 2010 lineup. We admitted that taking the 2.5-liter Altima Coupe for a spin didn’t exactly leave us impressed with the performance. Now, we have just gotten out of the 2010 Nissan Altima sedan, this one housing the 3.5-liter V-6, and we’d be lying if we said it didn’t make up for most of the shortcomings of the smaller-displacement, four-cylinder engine. And this time around, the Altima came to our turf—the wintry roads of Michigan.
Our first complaint (you saw this one coming, didn’t you?) is that the Altima sedan is only available with the Continuously Variable Transmission, something we have found universally to be a bit of a killjoy in most any vehicle. There’s just something more satisfying and engaging about the feeling of shifting through the gears, even in an automatic. Some CVTs try to mimic the manual shift feature of, say, a dual-clutch transmission, but it is usually done so awkwardly, and with little practical value.
Unlike when mated to the 2.5-liter four, however, the CVT functioned more comfortably with the more powerful V-6. Under heavy acceleration, instead of whining at a constant level of high rpm, the engine note rose much more smoothly, and with no complaint.
Standing on the accelerator for the first few times, we were actually quite impressed. The Altima sprang to life quickly, even spinning the front tires a bit when sprinting from a halt. After a certain point, perhaps the equivalent of second gear, acceleration increases noticeably. In another vehicle, it would feel like we just had extra power on hand from a gear change, but with the CVT, it gave us a similar sensation to the pushed-back-in-the-seat boost one feels when a turbocharged engine spools up. It was subtle, but it was definitely there. We admit, it wasn’t wholly terrible feeling the revs climb in one fluid span, rather than the usual short, repeating power curve through six gears.
The weight of the steering wheel was not too light, as is the case with many sedans in this segment. While it doesn’t strain one’s biceps to turn the vehicle, neither did it jerk left or right under the mere weight of our hands. Also, it had only about a small amount of play, maybe an inch or so under most conditions. It did feel a bit imprecise, however, as some moves would require tiny adjustment afterward. We didn’t get much feedback from the road coming to our hands, and the only motion we felt was the vibration of the engine in our palms.
Through seat and feet, though, we did get the input we seek from the pavement to give us confidence and control. We definitely felt more of the surface irregularities of the ground passing beneath us than we did on the smooth, rolling crests of rural Tennessee. If there were bumps or frost heaves on the highway, or gravel on a curvy road, the suspension transmitted that to our bodies, if not our hands. And, as a testament to the Altima’s comfortable grace, we never felt jostled within our seat. Here, we think Nissan did a good job of balancing the comfort of a family sedan with the kind of poise we look for in a potential spirited drive.
Despite our nags, the Altima, particularly with six cylinders under the hood, is a good car to drive. Particularly with the styling and technology updates Nissan made for the 2010 model year, it has a lot to offer as a daily driver, if not as an outright enthusiast vehicle. For somebody who wants something practical (and very handsome, we might add), but still not at all wimpy, the Altima SR sedan is a clever contender.
All that’s left—and this is something we now look forward to with covetous anticipation­—is to get behind the wheel of the Altima Coupe SR with the six-speed manual.
2010 Nissan Altima SR
Engine                        V-6, 3.5 liters, 24v
Output                        270 hp / 258 lb-ft
Weight                        3357 lb
Cargo Capacity          15.2 cu ft
Fuel Economy            20 city / 27 hwy mpg
Base Price                  $24,520
Tags:
3.5AltimaNissanNissan Altimasix cylinderV-6