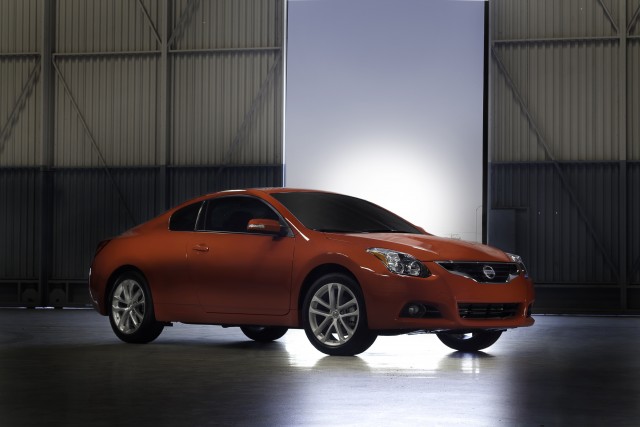 We drive the 2010 Altima Coupe, Sentra Sedan, and Versa Hatchback back-to-back-to-back to see what the refreshed line is made of.

For 2010, a good portion of Nissan’s lineup has been refreshed. The Altima, Sentra, and Versa, were updated to compete with the ever-expanding sedan market. It had been a while since we’ve been behind the wheel of these three models, so we went down to Nissan’s American headquarters among the rolling, green hills of Tennessee to reacquaint ourselves, and to see what each model had to offer.

Definitely the sportiest of the Nissan news in terms of appearance was the 2010 Altima coupe, which drew us immediately. We admit, it’s a good-looking car. It appears confident, but not without a level of restraint. It still has the same form as the sedan, which itself is sleek yet not approaching aggressive. The wheelbase is shorter, and its more compact footprint and two-door profile give a hint of speed to the curve of the cabin.

The fresh, sporty appearance continues inside the vehicle. The dash, particularly over the air ducts, mimics the swooping lines of the exterior. Brushed aluminum accents and contrasting stitching throughout the cabin looks sharp, not stuffy. The instruments, dials, and controls incorporate a red lighting that jives well with the tone of the vehicle.

If only the engine could back up this sporty appearance. The 2.5-liter inline-four powering the Altima we drove puts out 175 horsepower and 180 pound-feet of torque. Those sound like decent figures, and they are for most practical applications. But in a car that has been updated to convey the sportier look, we’d recommend trying out the new 3.5-liter V-6 version, which offers 270 horsepower, and 258 pound-feet.

To be quite honest, our perception of power delivery may have been tarnished by the continuously variable transmission, which may be new and exciting technology to some folks, but seems to suck most of the joy out of acceleration. Actually, the mating of this particular four-banger to this CVT wasn’t as grating and laborious-sounding a combination as we’ve seen before; in fact it was one of the best we’ve driven. We would still prefer to shift through gears, preferably manually.  Nissan, however, expects six-speed manuals to compose a mere fraction of the sales for all models.

On the road, the Altima was smooth and composed. The suspension neutralized most bumps and irregularities in the road, and never felt like it was going to float away cresting over the many small hills on our drive route. Curvy roads were carved across easily, if numbly. Again, not really a sporting feel here either, though the Altima did provide a comfortable, calm ride along Tennessee backroads.

While the looks may have changed to exude more athleticism, the real Altima is more about comfort than anything else. For a car that does its duty without much fanfare, but with a slick new look and great value, the Nissan Altima is a fine automobile. But we, as usual, were looking to have a little more fun.

Approaching the new Nissan Sentra, the facelift isn’t anything profound. The 2.0 has a new grille and bumper, updated lights, and a new wheel design. Hopping inside, the interior has been touched with new fabrics and optional leather seats. Our also had the new navigation package, which we shall address in a bit.

On the road, the Sentra, though less powerful than the Altima we had just driven, seemed more true to its appearance. Its 2.0-liter four puts out 140 horsepower and 147 pound-feet of torque, and while it didn’t push the vehicle to speed any faster than its sibling, something about a roomier vehicle performing with almost as much gusto as the more powerful Altima coupe endeared us to it.

Speaking of gusto, the Sentra had it in other areas that the Altima did not. The steering offered the same amount of precision, and maybe even felt a little more elastic. But, at the same time, it communicated. The connection between hand and tire was more real, and it made for a bit more enthusiasm through the curves. The suspension was livelier, and conveyed more of the chatter of the road beneath us. On the same roads we had driven before, we realized we were having a more involving driving experience. Someone who doesn’t want to wrinkle his suit on the way to work might not appreciate the slightly-less polite Sentra, but we enjoyed it over the subdued nature of the Altima.

We came to Nashville with high expectations for the Nissan Versa, having been impressed with what an under-$10k car was capable of when we tested the 1.6 Base on Michigan’s relatively flat, straight roads. Eagerly, we hopped behind the wheel of the slightly more functional, more powerful SL hatchback, with its 1.8-liter inline-four.

The exterior changes are minimal on the Versa; only the grille and wheels have been updated. The interior has undergone some noticeable enhancement. The new materials have are eye-catching and hand-magnetizing. The audio layout in the center has an attractive, mature appearance. In all, it was a welcome refresh to the interior, and one that is certain to resonate with buyers looking for value.

Power is ample in the 1.8-liter engine, but again, we encountered that damned CVT. Having driven the five-speed manual version previously, we would opt for that gearbox for two main reasons: First, it gives us more control and involvement. Secondly, the CVT, especially when driven hard, maintains an unchanging, whiny growl, as though the engine is screaming for mercy. We’ll take a composed, rising engine tone over that noise any day.

Hitting those same hilly, winding roads in the Versa, we found the closest thing all day to what we are always looking for, a joyful, engaging romp in a willing vehicle. The steering feel surpassed that of the Sentra, and was perhaps the opposite of the Altima. The Versa happily rotated when we asked it, and we always had a sense of the direction of the wheels and what was passing beneath them. The suspension was the same way, only with less body roll than the Sentra. Sure, it wasn’t as powerful as the other cars we piloted, but we were able to have a lot more fun in the Versa, like reconnecting with an old friend.

The thing that makes the Versa fantastic, though, is its value. The hatchback version of the Versa, with a six-speed manual and 1.8-liter engine, starts at a mere $13,150. If you can live with the sedan body style, the 1.6 Base, which comes with a five-speed manual, is only $9990 (only the Hyundai Accent Blue 3-Door can be had for less, at $9970). Less than ten grand for a new car that is actually mildly entertaining to drive? Not a bad place to start shopping.

Another added value for the 2010 Sentra and Versa models is the availability of Nissan’s new $400 touch-screen navigation and audio system, developed in partnership with Bosch. It features Bluetooth telephone interface for hands-free calling. It has a USB input for an iPod or thumb drive, and auxiliary input for other audio. The unit displays XM traffic and radio, and the navigation interface features an “eco-route” system, which can give you directions to your destination that will use the least amount of fuel. An optional integrated backup camera is also available.