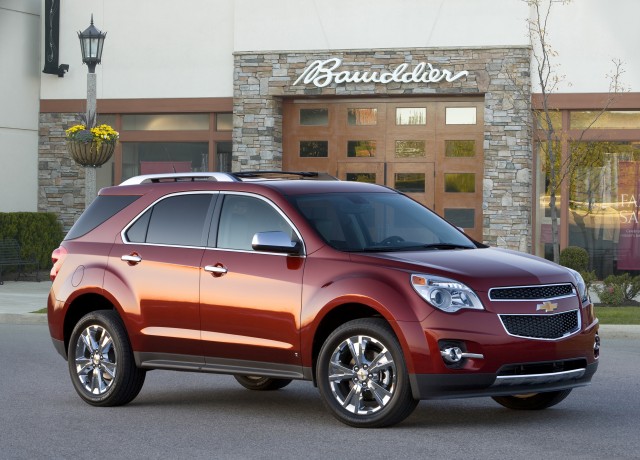 General Motors, among financial turmoil and brand sell-offs, has decided to use its most well known brand to usher in the new generation of GM. The vehicle it chose to do it with, however is a crossover: the 2010 Chevrolet Equinox. Why? Because the company is confident that it will sell. The redesigned, reengineered Equinox, in the mind of the company, is the perfect package of comfort, safety, utility, and, most importantly, value.

The 2010 Equinox gets two brand new power plants, both with direct injection. The 2.4-liter in-line four

comes standard in all trim levels, with the 3.0-liter V-6 as an option. Other compact or mid-sized crossovers with direct injection engines aren’t necessarily scarce. The Audi Q5 has one. So does the new Cadillac SRX (read about these vehicles in greater depth in Issue 47 of Winding Road). These other crossovers also have a higher price tag, and lower fuel economy. The base Equinox (LS with front-wheel drive) has an MSRP of $21,010, and touts an EPA-estimated fuel economy of 32 miles per gallon on the highway (22 in the city).

Value is one of the standards by which the Equinox will be judged and favored, and GM knows this. But does the Equinox give us the whole package? We often see the word “value” and immediately think “cheap,” especially coming from a corporation that has been strapped for cash, and has practiced brand dilution for years. Yes, the use of standard direct injection engines in the Equinox appears to be progress for the troubled American automaker, but, because of the timing of this vehicle’s launch, it must stand up to the scrutiny of skeptical consumers and media.

So, as is our duty, we scrutinized what Steve Bartolone, Chevrolet Marketing Product Director, called “America’s best compact crossover.”

(Keep reading after the jump.)

The Equinox, at least on the outside looks, well, like a crowd-pleasing, practical crossover—the kind of styling that won’t offend most anyone’s aesthetic sensibilities. In fact, it looks nice. It’s macho enough to appeal to truck-loving men, but refined enough to appeal to reasonable moms as well. It may not look as sleek as the Audi Q5, or as opulent as the Cadillac SRX, but perhaps it’s not meant to. The Equinox’s market, according to Bartolone, is “practical and pragmatic,” and the styling reflects this. The exterior is also designed to be aerodynamic. The Equinox’s drag coefficient of 0.36 is part of what helps it achieve its impressive gas mileage.

Moving into the cabin, we notice the inside of the vehicle is comfortable and calming. The dash seems to wrap around you as it flows congruently into the door trim. The seats look and feel great, especially in the Brownstone leather, and we found it took very little adjustment to find a seating position comfortable for long cruises. The bolstering of the seats was enough to keep us in place on curves, but it never felt invasive. The instrument layout is attractive and easy to use, and there is plenty of usable space throughout the vehicle.

Motoring in the Equinox is not exciting, and that seems to be the point. Engine and road noise are kept to a minimum by the Active Noise Control, which actually allows the Equinox to eke out an otherwise much noisier MPG. Acoustic glass also isolates the cabin from the outside noise, making it easy to converse within the vehicle. The suspension allows for some road feel, but nothing too jarring, even over the potholes stuffed with fresh tar that crumble across many Michigan back roads.

The 2.4-liter engine delivers adequate power for the Equinox, but nothing that will blow your socks off. Instead, customers get the fuel economy they are promised. If you need more power, the 3.0-liter provides it, but at the cost of lower fuel economy (18/25 mpg in front-wheel-drive models). Either engine is suited to duties of the Equinox, though, and Chevy expect the take rate to be about 70 to 75 percent in favor of the smaller power plant. Expect to see these great direct injection engines in other GM vehicles down the road.  Small cars oriented to either performance or efficiency would benefit here.

Chevrolet intends to keep the Equinox marketable by limiting the amount of accessories and options included in the various trim levels. Instead, they will be leaving these options as options, which customers will order through the dealer, rather than getting stuck paying for a package full of stuff they don’t want simply to get one or two features they need.  This, Chevrolet argues, will make it easier on the customer’s wallet, and for the dealer who orders the vehicle.

One will definitely get what they pay for with the Chevrolet Equinox, provided one expects to pay for a comfortable crossover with moderate power, ample comfort and space, and a variety of options—not an enthusiast vehicle. Will it be the car to save GM from financial meltdown? Probably not—at least not single-handedly. But the all-new Chevrolet Equinox is promising as a highly saleable vehicle, and as a step in the right direction for a viable GM.

Click through the gallery above to see the all-new 2010 Chevrolet Equinox.