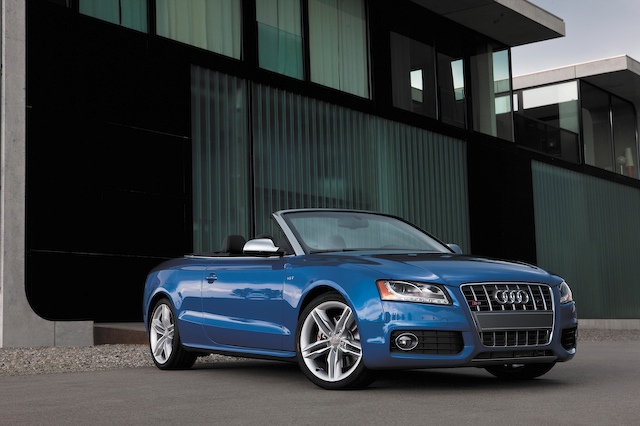 The new 2010 Audi S5 Cabriolet looks good from any angle. Even from the inside of the back seat with the soft-top snuggly closed. The room isn’t adequate for someone six-foot six, but that’s not the point. Viewed from this slightly cramped vantage, the fact that Audi attends to details in a most exhaustive manner seems abundantly clear.

A textured, seemingly mass-less material forms the smooth underside of the multi-layered fabric top. No crossbars or hinged joints show. Set into this impossibly thin material are LED reading lamps intended to benefit both rows of seats. I can’t recall ever having the need to read anything whilst in the back seat of a convertible with the top up, but those Germans from Ingolstadt knew someone else might.

The balance of the interior is typically Audi, meaning excellent detailing from the stitched seats to the S-trim only red lines around the gauge pods. Ample room awaits front-seat passengers and their liter-size bottles of fancy water.

The 2010 S5 replaces the 2009 S4 Cabriolet as the most affordable convertible in the Audi line. It shares the wider and longer stance of the S5 Coupe, as well as many of that car’s most beautiful exterior lines. An elegant detail is the way aluminum trim artfully wraps around the windshield and then rearward around the perimeter of the cabin in an unbroken line. Design magic.

The new S4 lacks panache when parked next to its more costly stable mate, but that doesn’t make it an unattractive sedan. The interiors look similar, as do some exterior details, including the handsome LED DRLs and LED taillamps.

Audi’s new supercharged 3.0-liter V-6 with direct injection powers both cars. Those who need a V-8 can still find it in the S5 Coupe. With nearly equal power, about the only thing missing from the blown V-6 is the familiar is pleasing exhaust note of the eight. The smaller, more efficient (28 mpg highway) engine makes 90-percent of its torque from 2100 rpm, with a peak torque of 325 pound-feet and 333 horsepower. Getting used to the auto industry’s downsizing trend won’t be so hard with engines like this.

Pedal buried in the plush carpet, the power comes on in a linear fashion. There are no flat spots or peaks. In fact, the delivery is so smooth that it leaves the more aggressive driver wishing for more power to scare themselves with.

Two gearboxes are available, the standard six-speed manual and optional S tonic dual-clutch transmission. Being a fan of what works best, we heartily recommend the paddle-equipped gearbox. While there’s nothing wrong with the manual, it’s unexceptional in nearly every regard. The throws are light but the action lacks the feeling of mechanical satisfaction. Ditto for the clutch. Neither encourages much involvement.

The S tronic, on the other hand, feels perfect in these two cars. Keep in mind that these are not sports cars, but sporting cars. The difference is important. For this convertible and saloon, the automated manual matches these personalities perfectly, and is likely totally in line with the driving style of their owners.

In automatic mode, the gearbox moves up and down through its seven ratios seamlessly. In the S5 with the top down, the sound of the engine and exhaust add a little something extra to the experience. With each upshift, the blower bleeds off some pressure that the attuned ear picks up. While not as boisterous as the turbocharged 2.0-liter in the Audi TTS, it’s still fun. Shifts are nearly instant, with rev-matching on the downshifts.

During this same press event, we also drove several different R8 models with V-8s and V-10s. The S tronic of the S5 and S4 performed better than the R tronic in the R8. The former lit off smoothly from a rest and delivered silky part-throttle shifts. The latter can’t seem to deliver a smooth shift to save its mechanical life, or impress a journalist. While fast and firm shifts make a difference during track days, they ware on an owner during everything less than eight-tenths driving.

Suspensions are likewise dialed into what the expected owner should love. The goal was a Goldilocks’ blend of handling and comfort. Biased toward day-to-day driving, the compromise delivers a ride that is controlled but never harsh.

We were totally shocked to realize how little of the suspension we were using on the road. This snapped into focus during laps at what will forever be Sears Point Raceway in our minds (currently called Infinion, of course). The vastly increased demands of track driving and the tossable nature of S4 (the only car we drove on the circuit) showed the vast reserve of suspension travel laying in wait for the spirited driver.

Unlike many cars that go flaccid and floppy when pushed hard, the S4 took what might have been construed as abuse and played along. The big 18-inch wheels and tires begrudgingly gave up their grip only after a long fight and always jumped right back in the game in time to slow for the next corner. Brakes stayed strong and fade refused to be an issue.

Both new Audis can be had with a fancy-smanchie torque-vectoring rear-differential. Articles equal to this one’s entire length have explained the new technology. Oversimplified, it benefits drivers by countering the systemic understeer that is standard thanks to the added traction of Quattro all-wheel drive. Suffice it to write that when in a corner with the power on, the outside-rear wheel gets spun up to an ever-so-slightly higher speed than the opposite rear wheel. The effect is one of helping to push that side of the car around the corner, aiding rotation (yaw) through the corner.

It works as advertised.

On the track, the S4 also responded appropriately to lifting the throttle mid-corner. A sign of a well-balanced chassis, the nose tucks in predictably, and helps the car feel responsive and forgiving.

While we used up the better part of a day with the S4 at Sears Point, we spent most of our on-road time in the S5 with the top down. This soft top drops in under 20 seconds, and in the warm fall sunshine, it was one of the finest ways possible to enjoy the sights and smells of Northern California.

Top down, rougher roads did excite some shake in the windshield header. The side-to-side movement wasn’t wholly objectionable, and pointed out a compromise the engineers must have made to keep the S5’s weight down (4,350 pounds!) as opposed to adding even more structure. Trunks also showcase interesting tradeoffs in convertibles, and the S5’s told some more stories. The opening is narrow (in deference to a stiff chassis) and the size is limited in height and width to accommodate the top mechanism. The volume is still reasonable, and a split pass-through made possible by the individually folding rear seats add to the interior utility.

Top up, the S5 felt tight and capable of being as much of a four-season car as any retractable hard top.

The 2010 Audi S4 and S5 Cabriolet are a two-model attack directed at the BMW 3er and the Mercedes C-Class. Compared on a feature-equalized basis, the Audis present a compelling argument for cross shopping.