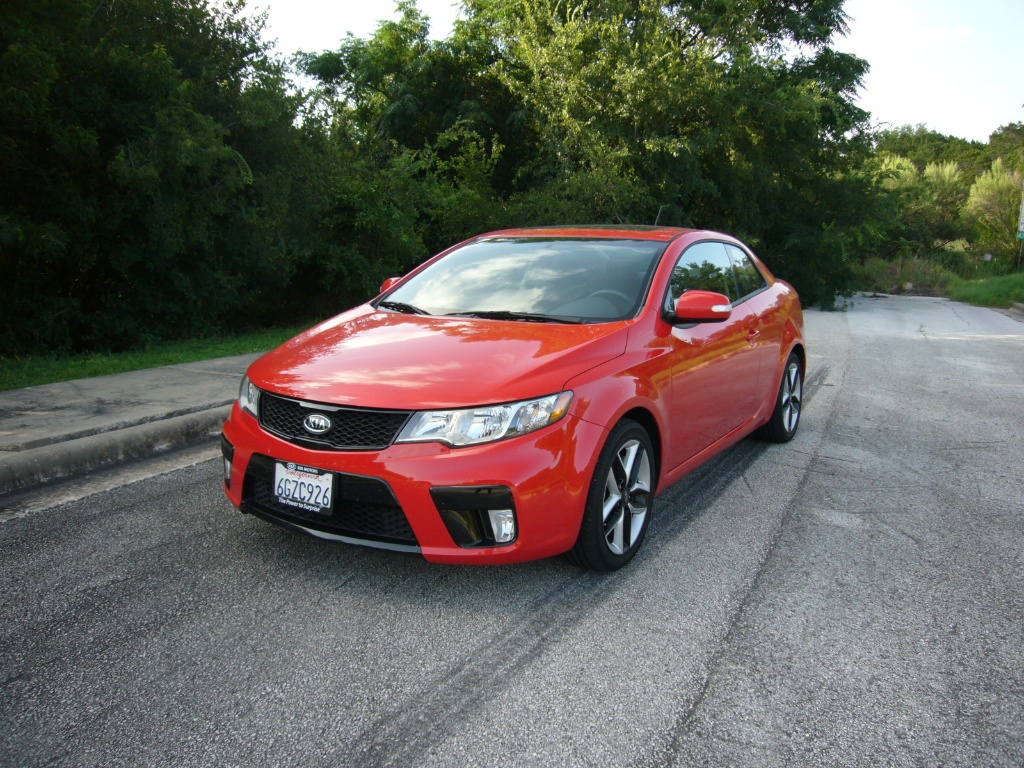 The first Kia Forte I ever drove was a very basic Forte sedan model that was pleasant enough to look at, but pretty unimpressive to drive. The core problem, as I recall, was that the little sedan was saddled with a not-terribly-smooth, 156-horsepower, 2.0-liter four-cylinder married to a thoroughly uninspired four-speed automatic. The result was a car that offered good, solid minimalist transportation, but not much more. Or, to put it another way, let’s just say the car lacked any real sense of joie de vivre.

Having just spent a week with Kia’s new Forte Koup SX, however, I’m pleased to say that things have taken a serious turn for the better, and here’s why. First, the SX comes equipped with a larger, smoother, and more powerful 2.4-liter four-cylinder that belts out 173 horsepower and 168 pound-feet of torque (the latter figure representing an impressive 24 pound-foot increase over the output of the smaller four). Next, the SX model dispenses with the tiresome four-speed automatic, replacing it with a five-speed auto. What a difference those two changes make.

Where the 2.0 liter/four-speed Forte sedan seemed like an unhappy camper that was perpetually caught in the not-quite-right gear, the new Forte Koup SX accelerates smartly off the line, pulls up to highway speeds with alacrity, and then settles into a very tall but surprisingly pleasant cruising gear that leaves the engine spinning at a quiet 2300 rpm at 70 mph. Very soothing, and great for highway mileage too.  The key here is that the larger four-cylinder engine pulls with so much more authority (and a greater willingness to rev, if asked to do so) that the Koup SX feels like a happy car—one that’s eager to please. That said, though, I do wish we had an opportunity to try a Koup SX fitted with the alternative six-speed manual, which could potential be an even better combination.

One other significant detail is that the SX version of the Forte Koup comes standard with a “sport-tuned suspension” that adds welcome touches of firmness and roll-stiffness, making the Koup fun to drive and stable when cornered briskly (though its absolute grip limits are decent, but not astoundingly high). Steering is very nicely weighted, too, so that those who find the competing Scion tC’s steering a little too “rubbery” might feel the Koup’s higher effort steering offers a better compromise overall.

The interior of the Koup is nicely trimmed, though there are some textural discontinuities in the materials chosen for the parts that collectively make up the top of the dashboard. Even so, Kia gets props for making the instrument cluster simple to use and easy to read under virtually all lighting conditions (which is more than you can say for competitors such as the Mazda3). I found the Kia’s center stack audio and HVAC controls refreshingly straightforward too—not overly busy or chaotically organized as those in some small cars tend to be.  The Koup does, however, give away a few style and functionality points versus the rival Scion tC, in that the Scion offers a way cool dual front/rear sunroof as standard (whereas a sunroof is a $700 option on the Koup), and the Scion is a hatchback, which means it can easily accommodate irregularly shaped objects that would never fit through the Koup’s smallish trunk lid opening.

Still, the Forte Koup offers jaunty styling with attractive, angular side-sculpting creases that give the car a touch of understated dramatic flair. Paint quality on our Racing Red sample was exceptionally nice, perhaps reflecting the influence of Kia’s parent company, Hyundai. The Forte Koup SX shows that Kia has come a long way in a short span of time. We can only anticipate even more sporting versions of the car that might appear in the future.

To my eye the Koup is an attractive car, with nicely chisled lines and well-chosen proportions. The interior is less distinctive, but perfectly usable, including a back seat that has ample leg-room and fold-down rear seats.

The drive isn’t bad either. The Koup accelerates well and the handling is well-balanced. I simply found it hard to get excited about the proceedings, because the Koup doesn’t have a lot of character. Adding a manual transmission (a six-speed is available on the Koup, but our tester came with an auto) would help of course. But the Koup simply doesn’t provide a lot of feedback.

For the price, of course, it takes some work to think of a better car. The Fit is more tossable and agile, but it lacks the Koup’s style. The Cube has style, but of a different sort, and isn’t as fast as the Koup, even if it is more entertaining. The Scion tC is a direct competitor, and I thought the tC was more engaging if slightly more ragged in its presentation. Of course you can spend more and get some really interesting cars (MazdaSpeed3, Civic Si, Mini), but we’re talking substantially more coin. So, all in all, the Koup seems like a pretty good value.