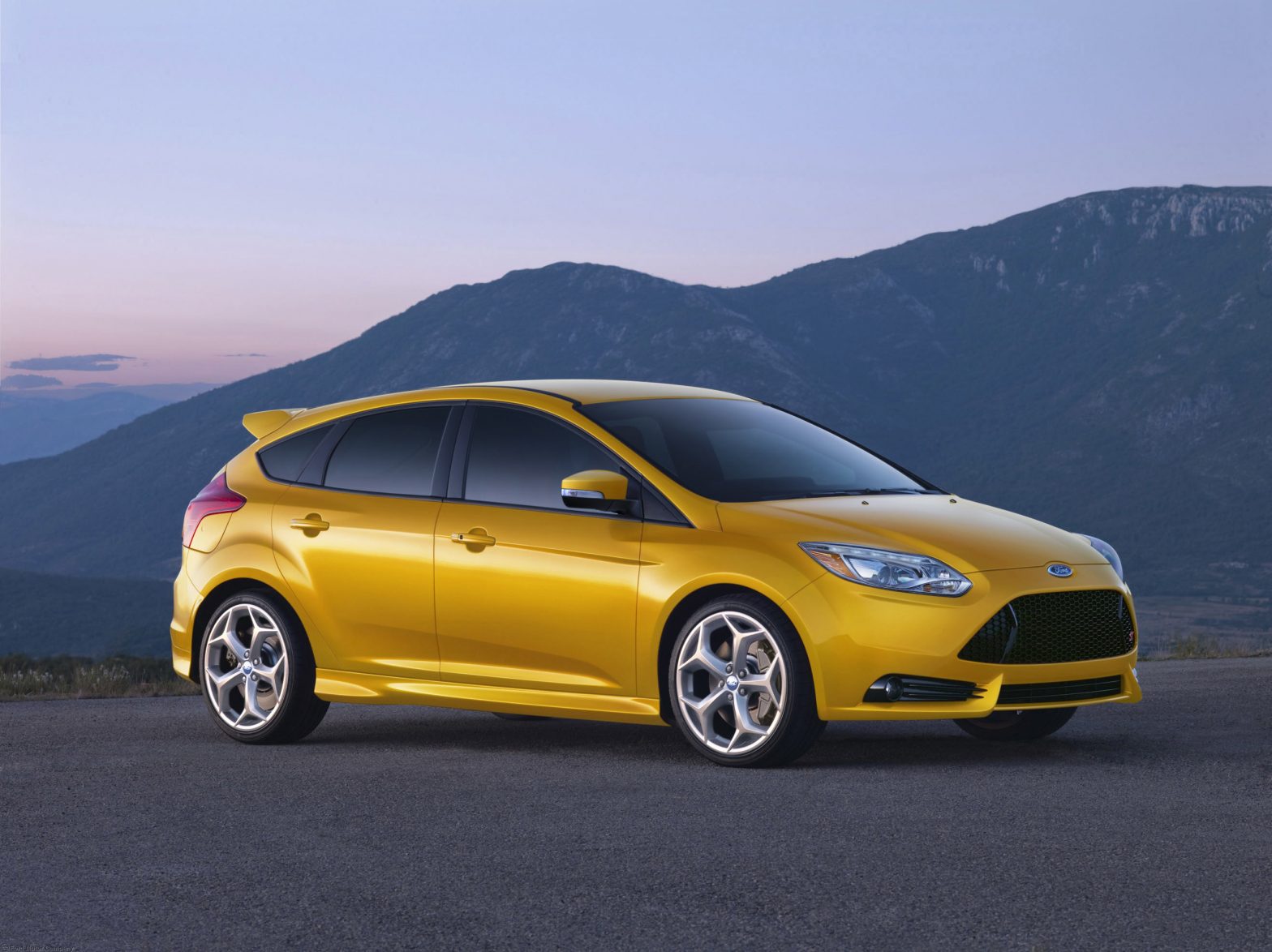 —Mason, Michigan
The Ford Focus ST doesn’t appear too dissimilar from the standard Focus upon which it improves, but there is plenty to set it apart visually. It has its own front and rear fascia, with lots of aerodynamic touches, including a bold rear spoiler that looks great in person. The center-exit dual exhaust tips are easily distinguishable (and eyes of passersby will be drawn to this feature by the sound—more on that later). The fact that it has been lowered 10 millimeters gives it a more athletic pose. Of course, the subtle-yet-bright ST badging lets you know exactly what you’re looking at.
Once inside the vehicle, it stands apart even further. The ST has a unique instrument panel, and features three sport gauges (oil temperature, boost pressure, and oil pressure) housed separately above the center stack. The sporty leather steering wheel features a bright “ST” badge at the bottom. Finally, the seats are a dead giveaway, especially if equipped with the Recaro sport seats like our tester.
[Click here to read our review of the 2013 Ford Explorer Sport]
The Recaro seats (ours, the partial-leather chairs included in the ST2) were very snug and extremely supportive. Upon first sitting down, we were quite surprised at the firmness. The curvature of the seat back held us upright in what ended up being a comfortable and natural posture as the miles tacked on. The big bolsters only felt constrictive for the first minute or so, but then began to feel quite comfortable as body and seat adapted to each other. Of course, this was all very helpful when cornering, as our entire body was held firmly in place as the g-force increased. We never found ourselves slipping out, sliding around in our seat, or hanging onto the steering wheel for support. We’d guess these seats would be a boon for track days and autocross, but we could definitely live with them on a daily basis (and we might even see less of our chiropractor as a result).

Being equipped with a six-speed manual transmission, the first control we used—before even pressing the push-button starter, was the left-most pedal on the floor. Using the clutch was a joy. Getting underway, the uptake was super smooth, and fairly forgiving in terms of the catch point. The resistance of the pedal was nice and meaty, not nearly too heavy or springy, but definitely not insubstantial. We found it to be good and easy to operate whether starting from a stop, or upshifting or downshifting at speed.
Shifting the six-speed transmission was a pretty straightforward endeavor. The throws were light and precise—although we had trouble telling by feel which gear we were in, we never had any problems finding a gate. As the lever settled in each gate, there was a palpable sense that it was in the right place. Our only niggle was with the orientation of the shifter; it put our wrist in a slightly unnatural position when shifting into second, fourth, and sixth. If the shift lever was taller, closer to our body, or angled away from the center armrest, we probably would never have noticed. With a little more time using it, we bet we’d have gotten used to it, too.
We really enjoyed the steering in the ST. First of all, the wheel was nicely contoured, and just a bit squishy, making holding onto it a truly pleasant feeling. The tuning of the steering rack was well suited to sporty driving. On center, it felt stable, but transferred in the details of the road surface. As we fed in a bit of steering angle, it ratcheted up quickly, and met our inputs with sharp response. The adaptive steering felt very rapid in most situations, and we didn’t need to crank the wheel very far to get a lot of rotation out of the Focus.
The ST’s suspension was very communicative, and added a lot to the sporty character and driving dynamics, whether driving in a straight line or pushing it through corners. When headed in a singular direction, the stiff suspension transmits an enormous amount of information about the road surface into the cabin. It reacts to every bump and irregularity in the road, and moves along with it. When travelling over regularly spaced expansion joints or frost heaves, the Focus ST can exhibit a little hobby-horse behavior. It doesn’t make the car feel unstable or unready to react like it would in a luxury car or SUV that was “porpoising” due to softness in the suspension. This still felt sharp on its toes, just bouncy and rigid. It fits the ST’s personality, though; if you weren’t looking to put up with a taut ride, you could simply stick with the standard Focus, or shop elsewhere. This is meant to be communicative, and it is.
In corners, the suspension didn’t feel too brittle. When throwing lateral motion into the equation, the suspension didn’t get upset. The car remained stable, and very flat. It also never showed a tendency to skip like a stone across the pavement, as we’ve experienced in other cars with stiff suspensions (here’s looking at you, Mini). It served to keep the Focus balanced, while informing the driver of what was going on between rubber and road. We felt every bit confident in this car’s stability as we pushed it through turns.

For many, the main attraction of the Focus ST is the 2.0-liter EcoBoost engine underneath the hood. Producing 252 horsepower and 270 pound-feet of torque, it feels very well suited to this 3323-pound hatchback. It offers plenty of power throughout the rev range, but we never noticed it to overcome the grip of the front tires upon takeoff (nor were we trying to get it to do so). As we accelerated, we didn’t feel any particular peaks or valleys in the power delivery. It came on strong, but didn’t present lag in the low revs, nor a kick in the pants we associate with many turbos as they build up pressure. It just felt uniformly fast, especially with being able to feel every bit of the road pass by beneath us.
The only drawback of the strong power delivery in the Focus ST was that it exhibited a lot of torque steer. Combined with the snappy steering, it made it a bit difficult to remain pointed dead ahead under wide-open throttle. Approaching the engine’s redline, we felt nervous to take our right hand off the wheel to reach over and prepare to shift.
The Focus’ sonic profile helps to accentuate the sportiness of the engine and define the character of the ST. It sounds burly for a 2.0-liter I-4, with a good resonance from the exhaust making its way into the cabin. It’s not terribly loud inside, but the sound is always there to let you know that is working hard and capable of more. It’s a really sonorous, macho soundtrack, and it’s one we could definitely live with, especially in a hot hatch like the ST.
The brakes were good, to match the accelerative skills of the motor propelling the car. The pedal feel was progressive, and brought things to a halt quickly and without drama. It was easy to modulate the brakes, and we weren’t jerking our co-driver around when we tried to slow down. It felt natural at high speeds, whether coming to a complete stop or just shedding a few miles per hour, and it was effective and comfortable to use in town, too.
The ST represents a fairly good value for the money. It comes in three trim levels: the base vehicle, ST2, and ST3. The base car starts at an attractive $24,495 when you include freight charges. For an additional $2385, you can step into the ST2, which is what we drove for our test. The ST2 adds the partial-leather Recaro sport seats we enjoyed so much, MyFord Touch with an eight-inch screen, HD and satellite radio, 10-speaker Sony sound, and dual-zone automatic HVAC. (Our tester also had optional navigation.) ST3 costs $4435 more than the base ST, and includes everything in the ST2, plus navigation, heated full-leather Recaro seats, heated mirrors, ambient lighting, and HID headlamps with LED signature and cornering lights.
We love that you can get into a Focus ST for less than $25,000, and our tester felt like a comprehensive, high-quality package for just a couple grand more. It appears Ford really put some thought and effort into the ST. Our favorite thing about it, though, is that it really feels unique to drive. It leaves absolutely no doubt that it is a sporty car from the moment you sit in it, and that strong character is enhanced greatly by the driving dynamics. There are a lot of other hot hatches out there, but the ST truly has a personality all its own.
It’s refreshing to get into a car of this quality, and not have it be just a slight bit more athletic than the base car, or feel too similar to the competition. The Focus ST might not be for everybody, but for many drivers, this is exactly what they’ve been asking for.
2013 Ford Focus ST
Engine: Turbocharged inline-4, 2.0 liters, 16v
Output: 252 hp/270 lb-ft
0-60 MPH: 6.3 sec (est)
Weight: 3323 lb
Fuel Economy, City/Hwy: 23/32 mpg
Base Price: $23,700
Price As Tested: $27,675
Tags:
2013chiropractorFocus STFordFord Explorer Sportford sthot hatchMichiganoil pressureoil temperatureUS Federal ReserveUSD