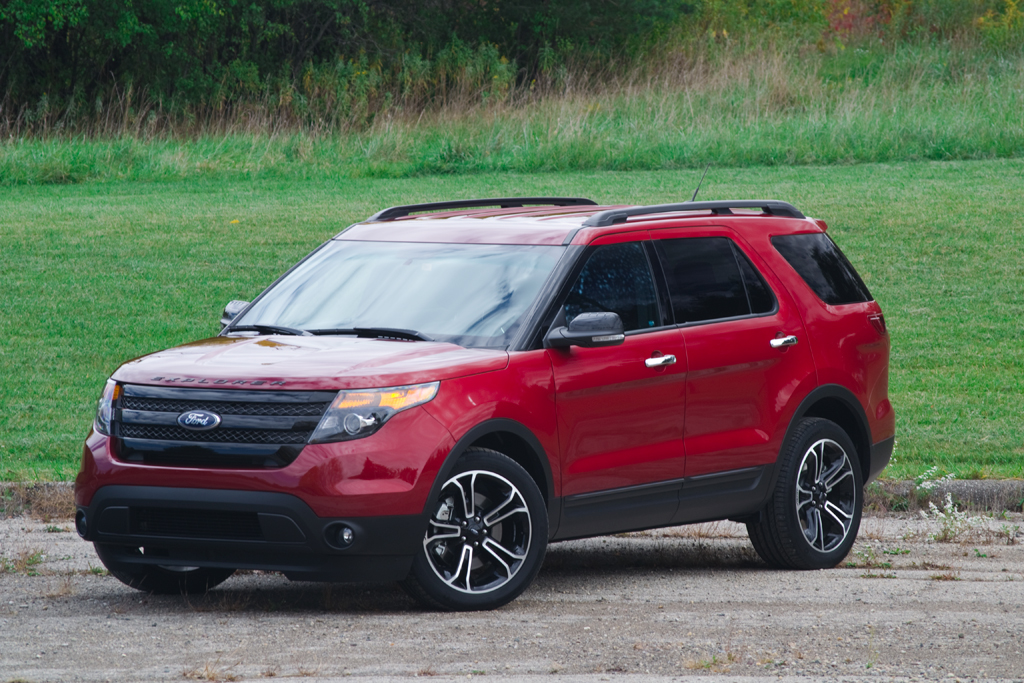 —Ann Arbor, Michigan
Our reviews of the Ford Explorer have been pretty positive since our initial test in late 2010. The big seven-passenger made a successful shift to a unibody platform, and has found a level of refinement the nameplate has never known. We’re also quite bullish on Ford’s EcoBoost range of engines, with particular love being heaped on the 3.5-liter V-6 from the Taurus SHO, Flex, and F-150. These two items have joined forces for 2013, resulting in the Ford Explorer Sport. So naturally, when the Dearborn-based manufacturer invited us to test this automotive witches brew, we were loath to decline.
Adding the 3.5-liter EcoBoost to the Explorer seems like a pretty smart move. While there’s never been anything offensive about the performance of the standard 3.5-liter V-6, it’s down 60 pound-feet of torque on the last-generation Explorer’s 4.6-liter V-8 (the old V-8 only packs a two-horsepower advantage on the V-6). Perhaps more importantly for the Explorer buyer, the naturally aspirated V-6’s 5000-pound towing capacity is down some 2000 pounds on the old V-8.
[Click here to read our review of the 2013 Ford Taurus EcoBoost]
The addition of the EcoBoost gives the Explorer a true workhorse engine for the first time since 2010. With 365 horsepower and 350 pound-feet of torque, the Explorer Sport packs both a significant horsepower and torque advantage on the old V-8 engine (73 ponies and 35 pound-feet of torque). Unfortunately, the extra power doesn’t help towing capacity, which is still stuck at only 5000 pounds.

Slapping the name “Sport” onto the end of Explorer necessitates more than just a new engine, though. There need to be aesthetic tweaks. The visual formula for the Explorer Sport is a simple one. Give it headlights and taillights with black housings for that cool tinted look, replace most of the chrome with shiny black stuff, and fit a set of chunky 20-inch wheels. Also, “Sport” badges. Gotta have the badges.
The resulting CUV is actually pretty darn attractive. Our Ruby Red tester’s red-and-black color scheme looks natural and high class. We are particularly fond of the rear end, as the black taillights and the associated black chrome strip above the license plate really tie the car together well. Our main complaint about the exterior is that we’re stuck with the Gillete Mach 3 grille. Surely a black honeycomb grille, like the one found on the Taurus SHO, would have looked more attractive, right?
Inside, the Explorer feels largely unchanged. The standard color is charcoal black, although a new Sienna brown contrasting interior is also available. The steering wheel is standard Ford, with an attractive design and nice enough leather, although we think a more bespoke wheel should be available on the Sport model. Even something as simple as Alcantara trimming would be an improvement. Paddle shifters have sprouted from the back of the steering wheel, although their small size and relatively shabby finish felt rather uninspired. The perforated, heated, cooled, ten-way driver’s seat is also a pretty standard item. We didn’t notice any additional bolstering that would set it apart from a lesser Explorer.
Our drive route was a series of twists and turns between Ann Arbor and Mason, Michigan to find out whether this Explorer Sport matches up to the potent competition, in particular, the Hemi-powered Dodge Durango (the Explorer’s most obvious competitor), or if the Blue Oval’s premier seven-seater has fallen flat by imbuing it with such power.
Ford’s EcoBoost V-6 is a consummate performer, elevating the straight-line prowess of the Explorer considerably. Ford claims a two-second improvement in the run to 60 miles per hour, which seems slightly optimistic. Turbo lag is rarely a big issue for this biturbocharged V-6, as it offers only a momentary hesitation before reaching its broad, powerful torque curve. Peak torque is reached at 3500 rpm, giving the Explorer Sport a serious mid-range punch.
This engine differs dramatically from the naturally aspirated, 5.7-liter Hemi V-8 found in the Dodge Durango. Where the Durango is full of life, with a complex, interesting exhaust note and an engaging power delivery, the Explorer Sport’s EcoBoost mill is free of drama. The sheer level of accessible power isn’t a bad thing, but it doesn’t do much to contribute to the overall fun of the driving experience. The exhaust note is rather dull relative to the assorted V-8s on the market, as well. The difference between these two is like the difference between the original Star Wars and Transformers: one is thrilling in a classic, difficult-to-express way, while the other is lots of excitement and not a ton of substance.
We’ve never been the type to turn down a twisty bit of pavement (our name is Winding Road after all), but the Explorer, even in Sport trim, will never be a corner carver. Ford’s engineers shored up the suspension for this model by stiffening the dampers, but the combination of a nearly 5000-pound curb weight and a balance that still leans heavily towards comfort over dynamism means that this is a vehicle that’s happiest on the freeway. Through the bends, roll is managed reasonably well, but mid-corner imperfections produce a high degree of vertical motion. It isn’t enough to really hurt our confidence, but it doesn’t have the planted feel we were hoping for.

The electric steering has been retuned, and feels quicker for what it’s worth. Feedback is still limited, though. Really, like the suspension, the steering is happiest when it’s asked to just go straight.
With a starting price of $40,720, the Explorer sits right between the two top models in the Hemi-powered, all-wheel-drive Durango range, the $38,595 R/T and the $43,285 Citadel. Our tester added the 402A option package (MyFord Touch, blind-spot monitoring, power liftgate, power tilt/telescopic steering, push-button start, ambient lighting, and a few other goodies), along with a pair of captain’s chairs in the second row, a trailer tow pack, the Ruby Red Tricoat paint, and summer tires. Total price sat at $48,385.
That’s a high number, especially considering a similarly optioned Durango Citadel can be had for $45,545. Still, less than a $3000 premium isn’t a particularly hard pill to swallow, especially when considering fuel economy. The turbocharged V-6 of the Explorer Sport will net 16 miles per gallon in the city and 22 mpg on the highway. That compares quite favorably to the all-wheel-drive, V-8-powered Citadel, with its 13-mpg city and 20-mpg highway ratings. There’s not a huge difference, but it’s definitely enough that we’d consider spending an extra couple thousand dollars.
Ford’s built a pretty comprehensive vehicle with the Explorer Sport, gifting it with a much-welcomed boost in power and torque, while giving the exterior some extra panache. It’s not a sports SUV in the mold of a Range Rover Sport or BMW X5M, but it is just the sort of vehicle for the family that wants to get where it’s going quickly, in comfort and style, and for a reasonable price. That’s a mission we can happily get behind.
2013 Ford Explorer Sport
Engine: Biturbocharged V-6, 3.5 liters, 24v
Output: 365 hp/350 lb-ft
0-60 MPH: 7.5 sec (est)
Weight: 4921 lb
Fuel Economy, City/Hwy: 16/22 mpg
Base Price: $40,720
On Sale: Now
Tags:
DEARBORNExplorerFordTaurus SHO