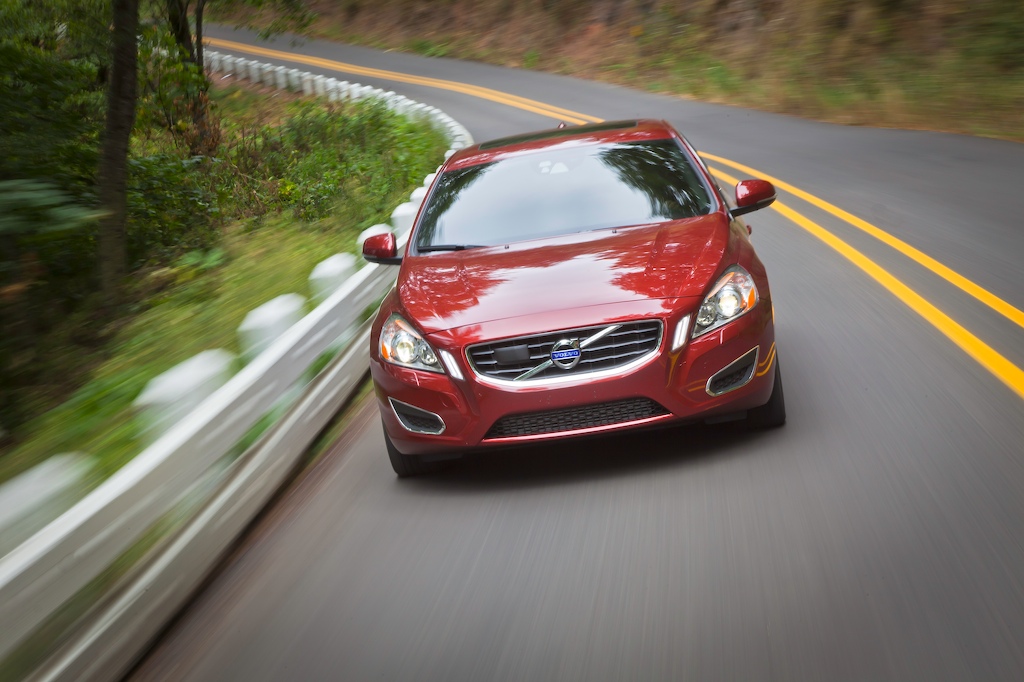 Throughout its last generation of vehicles, from the middle of the last decade and on, Volvo has, rather quietly, been building a lineup of fashion-forward, mature, and good-to-drive cars. The range has been characterized by what might be described as “stylish restraint,” with subtly good-looking products being churned out of the design department, and capable, non-flashy sorts of driving experiences on offer. All in, Volvos from the last five years have been really great options for buyers looking for something that balances luxury and quality with an utter lack of pretension.

That’s not a bad brand position to have, though it seems as though Volvo has found the nature of its unassuming luxury to be a bit limiting for its bread-and-butter model, the S60. Facing increasingly high-performance competition from pricier BMWs and Audis, Volvo has embarked on a bit of an image makeover with the new S60, one that would have you think of the Swedish brand as just a little bit more of a badass than you have before.

To that end, you’ve probably caught wind of the “Naughty Volvo” campaign, which has been in heavy rotation on television and online over the last number of weeks. With acrobatic, reverse-driving stunt work and action film-style jump-cutting commercials, Volvo seems set on positioning the S60 as an out-and-out sports sedan. We’ll just go ahead and tell you now that the sedan isn’t quite so “bad” as the marketing magicians would want us to believe, and certainly won’t be rivaling the top of the crop of sports sedans anytime soon, though it is a car that left us with an undeniably positive vibe. The S60 is an easy car to love, despite some shortcomings in its sporting cred.

Designers have done good work in translating the outgoing S60’s handsome and clean styling here, creating a new car that is sexier than the old without having to make an ostentatious statement. The Volvo has the same crispness of line as the previous car, but makes better on the four-door coupe concept with a tidier rear end and a more aggressive stance.

The interior of the car has been treated in a similar fashion, utilizing the same kind of minimal style that we’ve like so much in cars like the XC60. If anything, Volvo may be a little bit too far ahead of the curve in terms of interior design, as the exceedingly clean dashboard, and “waterfall” center stack lack any real hint of traditional ornamentation. The identically equipped S60s that were available for this launch drive lacked any of the very natural-looking wood finishes that we’ve seen in previous Volvo products, for instance, using metallic and nicely grained plastic finishes exclusively (wood will be available when the car goes on sale, however). In this case the super-sparse cabin treatment may be just a little bit too terse for the more conventional buyer—in much the same way that the living room you admire in Dwell magazine may not be one you’d actually live in. Still, this is a good-looking cabin.

Functionally, it’s pretty great, too. Seats are lightly bolstered and completely comfortable for significant driving—we rode/drove for 250 miles on our test with nary an aching buttock. NVH is handled well, too. The S60 was quiet at speed, with an engine note that could only be heard under hard acceleration (an even then, just a little).

To start, Volvo will only be offering its new S60 with the turbocharged, 3.0-liter, inline-six engine, recognizable with the familiar T6 badge. The S60’s T6 is the same 300-horsepower, 325-pound-feet-of-torque version that is found in the XC60 crossover, and the larger S80 sedan (a slightly less powerful T6 is also offered in the XC70 wagon). Thusly powered, the S60 will only be available with the six-speed automatic transmission that we had on hand to test, and only as an all-wheel-drive vehicle—expect a front-driver and a five-cylinder-equipped S60 to be made available later in the product cycle, too.

We liked this engine in the larger, heavier XC60, and we like it quite a bit here in the S60 as well. The torquey motor makes its presence felt early in the rev range, as you might expect, and the turbocharger doesn’t take much time at all to start delivering power to the engine and then the wheels. The result is a significant accelerative experience that is right on pace with what you’d find in, for instance, the BMW 335i. As with other turbo motors, the power curve feels rather flat here, great for passing power in everyday driving situations, but not ideal for making a really visceral, exciting-to-explore experience. Still, we must admit that the S60 feels quick, especially when accelerating from speed.

For a sedan that is being pitched so hard as a sporting ride, the Geartronic six-speed automatic transmission, and its less than enthusiastic driver interface, is a real letdown. Volvo wasn’t able to conjure up the development budget for some kind of paddle-shifting setup for its new sedan—a feature that is notoriously absent from the whole of the carmaker’s lineup—meaning that individual gear control is left to the nudging of the tunnel-mounted drive select lever. That’s not a horrible pronouncement in theory, but in practice the system just doesn’t work very well for aggressive driving. One engages manual mode by pushing the gearlever away from the driver’s seat, rather than towards it, placing the thing in a spot that is rather awkward to use. Once you lay your hand on the lever, the shifts are fine/average in terms of speed, but the forward-backward action (forward for upshifts, backward for downshifts) is insubstantial, and pretty unsatisfying. The manumatic put us in the mind of any number of shifters we’ve used on sit-down driving video games in the arcade, to give you a frame of reference for the experience.

Thankfully, we found the automatically shifting “sport” mode to work just fine in terms of kick down, and shift logic. And the mode seemed to fit the quick-but-laidback character of the car overall, too.

We drove over a stunning and diverse set of roads on our trip from Newberg (around 30 miles to the southwest of Portland) to our destination in the central part of the state, and the Volvo proved to be remarkably composed on the vast majority of them. Rather like a professional athlete that’s out playing a pickup game with his buddies, the S60 always gave us a sense of grace and great reserves of performance when being driven on public roads. At sane speeds, the AWD grip felt prodigious, the chassis quite balanced, and the suspension tuning cosseting without ever seeming overly soft. Body motions are kept nicely in check here, and overall ride control is pretty impressive. The downside is that the S60 manages all of that composure without really communicating information about nearness to the limit to the driver, at least not through any “seat-of-pants” feel.

On the plus side, the S60 delivers a higher degree of steering feel than we were expecting. Sure, we were expecting the car to offer up basically zero in this category, but the surprise was pleasant all the same. The helm is well weighted, and engineers have tuned the rack to be quicker, and more responsive to inputs as well. The car feels utterly graceful when large and sweeping turns are offered up, though a bit less so when tighter fare necessitates a quicker-rotating vehicle.

At the end of nearly 250 miles of fine Oregon roads, the Volvo team put together a track driving experience at Oregon Raceway Park in the sleepy town of Grass Valley. From the looks of the gently rolling hills that surround ORP, you’d never expect the sort of demanding, technical, and intimidating track on offer here. With something like 400 feet of elevation change over the course of 2.3 miles, and 14 corners that are mostly off-camber and/or completely blind, you can trust us when we say that this racetrack is no joke. Even after a recon lap, we must admit that we made a complete mess of our subsequent laps at speed—there’s just a lot of information to memorize before one can start to get things smoothed out at ORP. It was great news for us then, that most of the other assembled journalists were ready to head home to Newberg after their compulsory couple of laps, and we, therefore, got plenty of time to work the S60 around this monster.

We were pretty impressed with the car’s handling of the orange-cone chicanes (Volvo set up three of these in the midst of the longer straight sections of track to keep speeds down, and journalist survival rates up), as the AWD system bit hard into the pavement and allowed for smooth, quick lateral transitions. With that said, as our laps got less sloppy by way of track familiarization, the pushing, understeering nature of the car became more and more evident. Here too, the overall numbish nature of the S60 was set in far more dramatic relief, as the lack of sensory input made it increasingly difficult to find the real dynamic limits of the car, and left us guessing a bit at optimal speeds for corning, grip limits, and the like. Braking power wasn’t optimal for track work, either.

Of course, we honestly couldn’t give a flying lingonberry about how the S60 performs on the track—and neither should you, and neither should Volvo. Sure, it’s fun to do hot laps, and it’s maybe marginally useful to understand the real performance envelope for the car, but the reality of the on-road driving experience is far more illustrative for almost everyone involved. The S60 is fast and comfortable in most driving situations, it’s got an impressive suite of safety technology, and it looks great, inside and out, to boot. That the front-biased, AWD nature of the car means that it defaults to understeering under hard cornering loads may be a bit disappointing for the principled driving enthusiast in all of us, but it also makes the thing safer and more controllable in the sort of emergency situations that are much more likely to occur on one’s daily commute.

Volvo has built a lovely car with the new S60. The sedan offers a driving experience that should immediately win over repeat Volvo buyers, with looks that are likely to encourage a wave of new buyers into the fold. While not the performance machine that the cheeky “Naughty Volvo” marketing blitz would have you believe, we think the truth of the car is even more compelling—a confident, stylish, quick, and well priced alternative to the mainstay German competition.