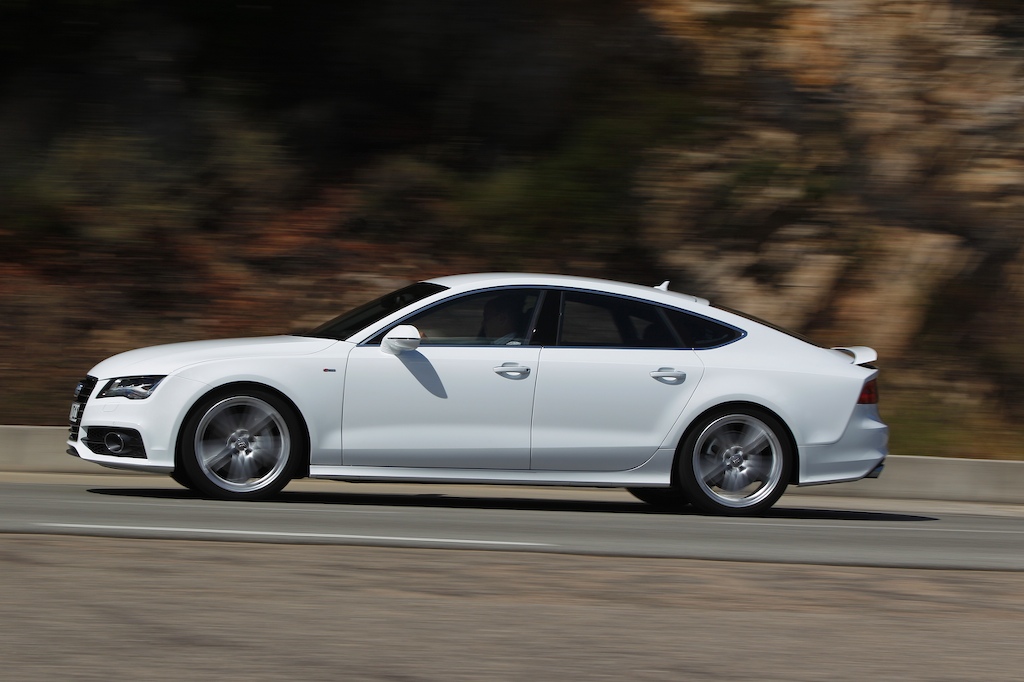 We drove the prototype for the A7 around Beverly Hills with serious police escort back in December 2009. First very superficial impression of the production version is that it is very pleasantly close to the striking prototype. Second one is that the A7 looks great when the rear wing is not deployed and looks silly in back whenever it is. This happens automatically every time we take it over 80 mph.

Beyond this knee-jerk thought, nothing regarding the A7 really surprises or shocks versus other Audis we’ve driven up to today. It has (or can get its hands on) everything that has been launched with such wild fanfare in the new A8. One new thing regarding safety is that the optional night vision infrared people spotter technology shows the warm-blooded bipedal in flaming red instead of negative gray.

Rather than point it at well-to-do, active families, Audi has chosen to position the A7 via its luxury, and its ability to hold four golf bags. Either direction is okay for us since the volumes that will sell of the A7 in North America will most likely go head-to-head with total sales of the A8 (in other words, pretty low volumes).

All of the tech from the A8—North American cars will come available with the new eight-speed automatic as launched on the A8, too, while the seven-speed S-tronic we love is standard—works every bit as well on the A7. We drove one A7 with the optional hydraulic air suspension and one without. We would definitely opt into the air suspension, with its three calibrations via the Audi Drive Select system, managed through the MMI onboard interface. The basic default suspension set is fine, but just feels less sophisticated than how we’d like our $60K Audi to feel these days.

There’re masses of room in the cabin—a much better spatial experience, in fact, than the Mercedes CLS. The other competitor here is the 5-Series GT from BMW, but that falls apart once the argument turns to aesthetics, so the GT shouldn’t really pose a threat by much. Rear cargo ranges from a minimum of 18.9 cubic feet to a stated maximum of 49.1 cubes.

North America gets only one powertrain: the well known supercharged 3.0 TFSI, here with 295 horsepower. The 324 pound-feet of torque help much in pushing the A7 to 60 mph in just 5.5 seconds. This is officially one of the fastest ways to get your foursome to the first tee on time. So far as looks and drive stance, the S-Line package is good work. If our options budget were limited though, we would be forced to pick for the air suspension first. Or we would just wait for the future S7 that comes due in about a year’s time.

Aside from the eternally practical design of the five-door with great big hatch, the attitude of the A7 feels nicer to cruise fast or slow than does the A8. Looks finer, too. And—oh, yeah, another new thing the A7 launches—if you get the Riva boat-inspired teak wood interior, you’ll be buying the next best thing to a Rolls-Royce Phantom Drophead Coupe.

The US starts getting its A7 shipments around April 2011. We have now to give the new Merc CLS a good drive try next month to see how the A7 really stacks up. Chances are pretty strong that it’ll be a tough choice between the two.