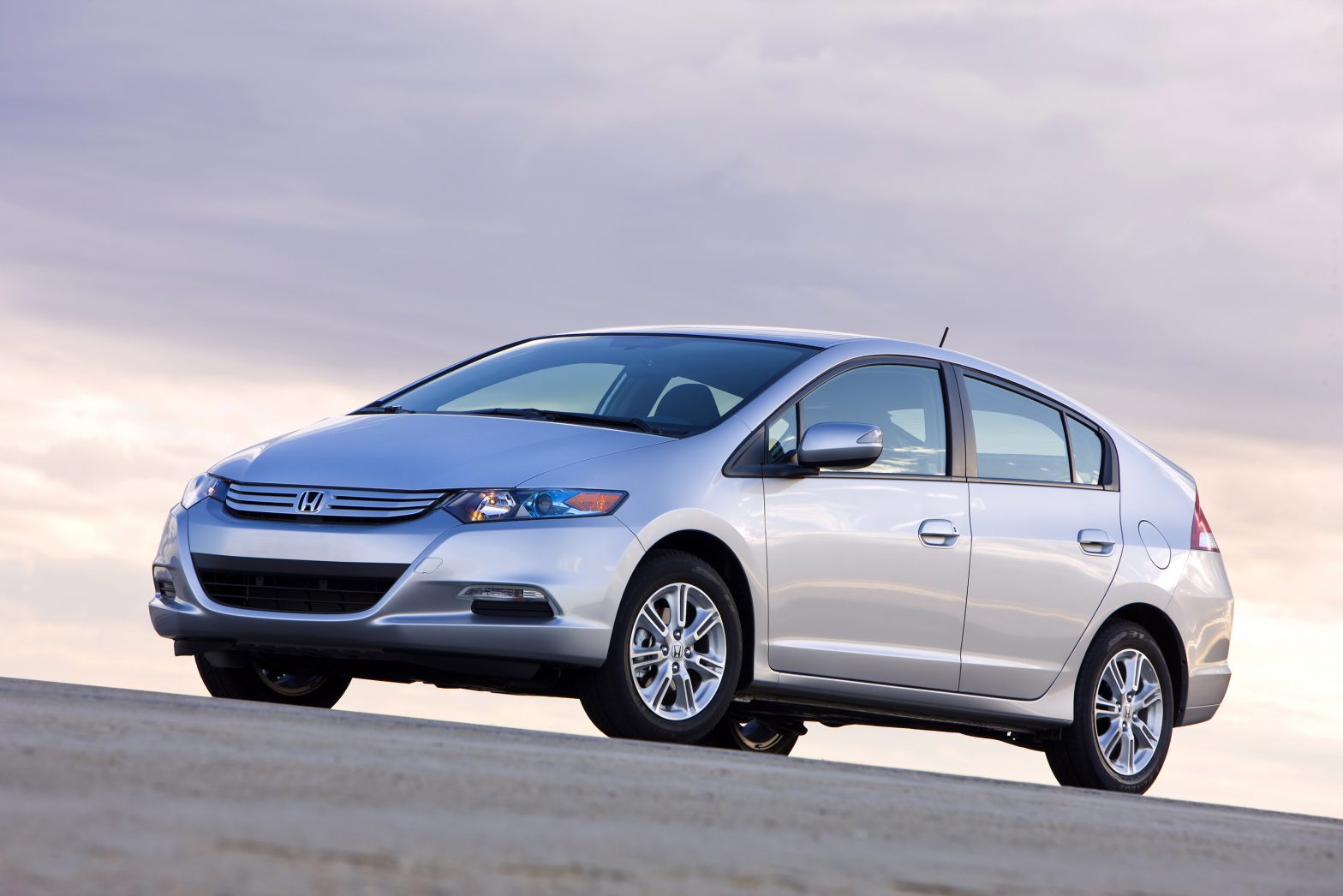 Let’s not compare it to the Toyota Prius, as difficult as that may be. And let us preface this by saying we love small Hondas. The Fit, S2000, and Civic (especially the Si) are some of our favorite cars to drive. With that in mind, let’s take another opportunity to nitpick discuss the 2010 Honda Insight.
The new Insight confuses us a bit. It doesn’t feel like a Honda. It certainly doesn’t sound like a Honda. There is no soul to the engine tone, which is grating and laborious, like an overworked coffee grinder. The CVT doesn’t help this at all; it just makes the terrible racket more consistent, as it is not alleviated by shifting through the gears. Oddly, the Insight has paddle shifters, which give the illusion of shifting. Thanks for humoring us, Honda.
The start-stop function puzzles us further. Upon bringing the vehicle to a halt, the engine may or may not stop, depending on whether or not the battery has enough charge to supply the vehicle’s electronics while idle. The engine starts again, not when the accelerator is pressed, but when one lifts the brake pedal. As the engine starts, the car shudders before beginning to creep, either until the gas or brake is applied again. We understand that most cars, in gear, will move forward when not braking. This does not mean, however, that a vehicle with a start-stop function should do the same. Once the engine stops, it should remain stopped until the driver says otherwise. And, just in case one was thinking of breathing a sigh of relief during that brief instant the engine goes to sleep, a red light reading “START STOP” flashes continuously from the instrument panel until the motor starts again. It’s as if the Insight doesn’t at all embrace the start-stop function, and recognizes it as something going wrong with the vehicle. The whole procedure is a world removed from what we’ve come to expect from the automaker—technology that is not only good, but easy and largely pleasurable to use.
Our third bewilderment comes from the overall handling of the Insight. It lacks the feel of other Hondas on the road. Yes, it has a completely different drivetrain than its more sporty siblings, but it should still steer like a Honda, and ride like a Honda. Instead, it feels like it’s going to shake apart and blow off the side of the highway. A bit unexpected from a Honda that has spent countless hours in the wind tunnel. That “shake apart” feeling isn’t mitigated one bit by the Insight’s interior either, a rather shabby collection of oddly colored, and poorly fitted plastics.
What happened with this new generation of Insight? It disappoints us, as we can’t help but compare it to the first-gen Insight, which was a pleasure to drive. It seems as though the 2010 Insight was so competition-focused that it lost sight of its own identity, which is that of a segment-leading, boundary-pushing, self-confident Honda.
Tags:
bewildermentcar shudderselectronicsHondaHybridInsightToyota