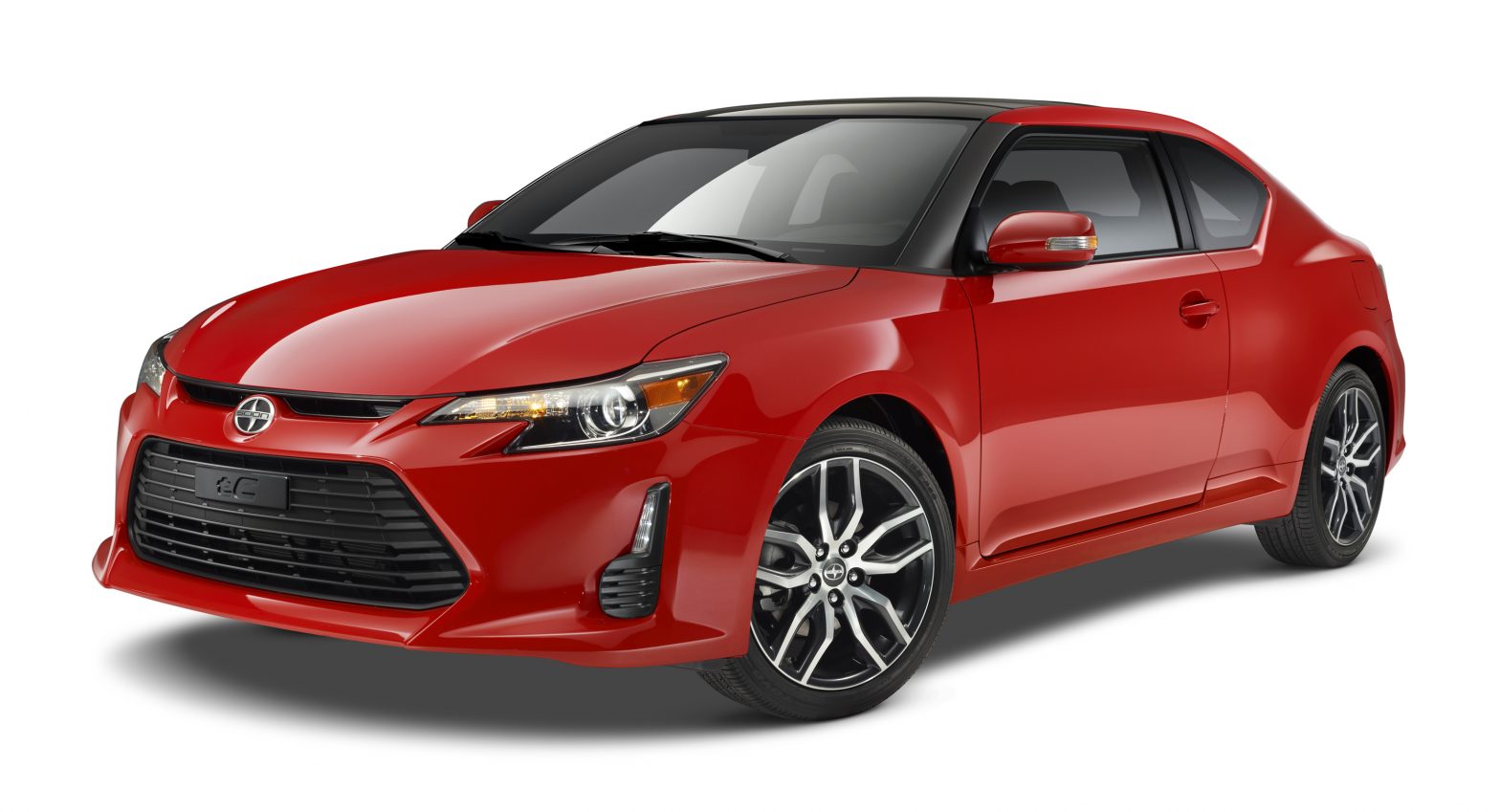 This is the Master Landing Page for the Scion tC. From now on, as we further review this car, we will be updating this page with whatever fresh content we create. Future drive reviews, updated specifications, videos, and other relevant information will all be found right here, in one convenient spot.
SUMMARY
The 2014 Scion tC has been revealed at the New York International Auto Show, with a new look, updated interior, new automatic transmission, and some handling upgrades.
The front end has a bit more in common, now, with its FR-S sibling. It features a lower hood and more open grille, with LED Accent lighting. In the rear, it also borrows from the FR-S with a blackout valence beneath the bumper. New LED taillights top it off, along with new 18-inch alloy wheels. Two new colors are available: Absolutely Red and Blue Streak Metallic.
Inside, the tC uses a 6.1-inch LCD touchscreen audio display as standard, with Bluetooth connectivity, HD Radio, and steering wheel controls. An available BeSpoke Premium Audio system features full navigation and Aha service.
The 2014 tC is powered by a 2.5-liter four-cylinder engine, producing 179 horsepower at 6000 rpm. The six-speed manual is unchanged, but the new six-speed automatic transmission shifts nearly twice as fast as the outgoing one, according to Scion. It uses Dynamic Rev Management technology taken from—you guessed it—the Scion FR-S, which blips the throttle to match revs on downshifts.
For 2014, the electronic power steering has been retuned, body rigidity has been increased, and the shock absorbers have been optimized according to Scion.
The 2014 Scion tC is slated to hit dealerships in June.
Scroll down for more information in the press release, below.
New, Sportier 2014 Scion tC Debuts at New York International Auto Show
2014 Scion tC
NEW YORK (March 28, 2013) – Scion revealed the new 2014 tC sports coupe at the New York International Auto Show, showing off a sporty new look, upgraded interior and an enhanced driving experience for the brand’s top-selling vehicle.
“The sustained success of the tC, which accounts for 40 percent of all Scions ever sold, challenged designers to enhance the 2014 sports coupe in ways that keep it exciting to today’s drivers without losing its core appeal,” said Doug Murtha, Scion vice president. “The outstanding result is a 2014 tC with a sportier style and driving experience that will thrill buyers and hold its unique spot in the marketplace.”
Aggressive Look with New Exterior Design and 18-Inch Wheels
The 2014 Scion tC is defined by more assertive styling, starting from the front with distinctive new headlamps and an all-new hood that extends lower toward a more open, muscular grille with an embedded tC logo. The new upper- and lower-grille treatments are bordered by LED accent lighting.
Beneath the rear bumper, a new black-out valance features an FR-S style, lower-center trim piece and lower perimeter reflectors; new advanced LED tail lamps complete the picture. New 18-inch alloy wheels with 225/45R18 tires carry the aggressive character through to the car’s profile. Standard on the tC, the wheels feature a premium dark gray finish, contrasted by eye-catching machined-spoke surfaces.
The tC will be available in seven exterior paint colors, including two new additions, Absolutely Red and Blue Streak Metallic.
Upgraded Materials and Scion Standard Display Audio Enhance Interior
The 2014 Scion tC’s cabin adds new technology, additional convenience features and upgraded materials. The tC will be the first model in the family to come with the all-new Scion Standard Display Audio, featuring a 6.1-inch LCD touchscreen. The system will be incorporated into all 2014 Scion models, making Scion the industry’s first non-luxury brand to feature a touchscreen audio system as standard equipment across its entire lineup. The new audio system comes equipped with features that Scion drivers will enjoy, including Bluetooth® compatibility, HD Radio™ Technology and steering wheel-mounted controls.
The new base audio system will be joined by an available, all-new Scion BeSpoke Premium Audio system featuring Aha™. This upgraded system includes full navigation, as well as the ability to connect compatible smart phones through Aha to access 30,000 free audio stations, including Scion’s own signature station featuring a lineup of its 17 music channels. In addition to audiobook stations, sports, news and entertainment, the Aha service utilizes location–based services like Yelp and TripAdvisor, and integrates most of the popular social media applications, all at a great value for consumers.
Added convenience features for the 2014 tC include auto-off headlamps and an auto-up and down driver’s window. The interior is upgraded with premium materials and lighter color fabric on the seats and the headliner.
Sportier Automatic Transmission and Enhanced Dynamic Handling
Getting there will be more than half the fun in the 2014 tC. Its 2.5-liter, four-cylinder engine delivers 179 horsepower at 6,000 RPM, and it is available either with a six-speed manual transmission or an updated six-speed automatic that can change gears nearly twice as fast as the previous model for both upshifts and downshifts. The automatic transmission now features Dynamic Rev Management technology, adopted from the FR-S, which quickly blips the engine to match its revs to gear ratios on downshifts, limiting driveline shock and adding to the visceral experience of driving the car.
Handling is enhanced by making modifications to stabilizer bar hardware, optimizing the shock absorbers, and by increasing the body rigidity with additional spot welds. Driving enthusiasts will also appreciate the retuned electronic power steering that provides a more engaging response. Together, these changes help the new tC to deliver a sportier, fun-to-drive experience behind the wheel. The 2014 Scion tC will arrive in dealerships in June.
GALLERIES
2014 Scion tC
VIDEO
The New 2014 Scion tC – First Look:
Tags:
2014automatic transmissionDynamic Rev Management technologyHD RadioNew YorkScionScion tCtC sports coupeVice President