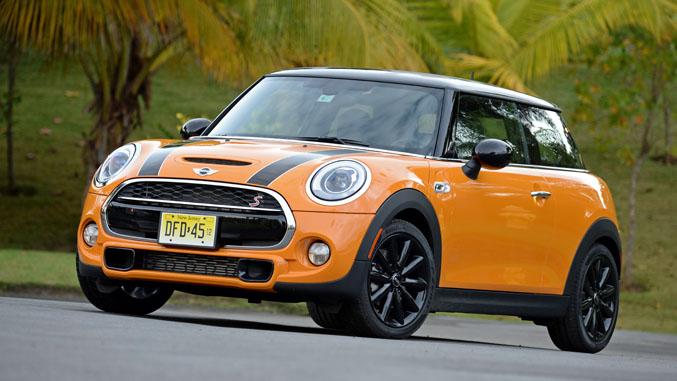 Now entering its third generation since the nameplate was brought back to market by BMW in 2000, the 2014 Mini Cooper and Mini Cooper S now share key engineering elements with front-drive BMW models coming to market later this year. While on the surface the new car may not appear significantly different from its predecessor, underneath the skin, the new Mini Cooper tells a different story.
Externally, Mini has wisely chosen not to give the iconic shape of the car a complete rethink. However the car’s dimensions continue to expand, as the new Mini is now 4.5 inches longer, 1.7 inches wider, and sports a wheelbase that is 1.1 inches longer than the previous generation. Much of the dimensional expansion has occurred between the bumper and the front wheels, and it results in a figure that continues the slow march toward a typical front-drive visual profile. Perhaps unsurprisingly, the increase in size has also resulted in some weight gain as well, though Mini engineers have made an effort to curtail this as much as possible, resulting in a fairly marginal 70-pound increase across the board. Base curb weight now stands at 2605 to 2795 pounds, depending on configuration, compared to 2535 to 2712 range of the previous car.

Frustrating as it may be for those enthusiasts who championed the original Mini’s diminutive stature, the larger footprint of the new car has allowed designers to create a more livable and usable car in terms of interior space and driving comfort. In nearly every aspect, the overall theme here is a Mini Cooper which has matured. However, the results are a mixed bag as this maturity forces the sacrifice of some the characteristics that made the Mini Cooper’s introduction such a sensation back in 2000. A perfect example of this is the loss of the massive speedometer fitted to the center stack of the previous model, which has since been replaced by an iDrive-esque display interface. Sure, it’s certainly more practical, and given the Mini’s limited interior space, that speedo gobbled up quite a bit of very useful real estate, but its loss also strikes us as another indicator of the Mini losing some of its identity in favor of BMW’s design philosophy.
There are other aspects where BMW’s influence is an unequivocally positive one. Interior materials show a marked improvement, now reminding us more of a 3-Series than a city cab, and the more traditional layout of the switchgear means newcomers will spend less time scouring the interior to ascertain out how to lower the windows. In an attempt to regain some of that Mini quirkiness, new elements like the color-configurable LED ring around the center stack make an appearance, though whether they add to the car’s charm or detract from it is up for debate.

Perhaps the biggest news regarding the third generation Mini Cooper is the new base engine offered. The base Mini Cooper loses a cylinder and gains a twin-scroll turbocharger, resulting in a three-cylinder mill that displaces 1.5-liters and sees an improvement in both performance and fuel economy over the naturally aspirated four-cylinder motor used in the previous generation. Output now stands at 134 horsepower and 162 lb-ft of torque, an increase of 23 hp and 48 lb-ft. Fuel economy ratings are expected to be roughly 30 city and 41 highway, a significant increase over the 27/35 mpg city/highway numbers posted by the last model.
The new base engine gives the Mini Cooper a newfound welcome sense of urgency to its acceleration, with 0-60 runs now taking about 7.4 seconds instead of the lackadaisical 8.4 seconds of the manually equipped models and the downright lethargic 9.6 second runs of models fitted with the automatic gearbox in the previous generation. Still by no means a white-knuckle affair, the more powerful motor equates to a more entertaining driving experience, and the additional torque also makes passing slower traffic on a two-lane road a less sketchy proposition. While not overtly noisy, the new engine does generate a distinctive rumble that lands somewhere between the snortiness of an Audi five-cylinder and the gurgle of a small displacement diesel.
The 2.0-liter turbo four-cylinder in Mini Cooper S now generates 189 peak horsepower and 207 lb-ft of torque between 1250 rpm and 4750 rpm, giving the S model a solid amount of pull throughout the majority of the rev band. Torque steer is still present here, but thankfully it’s not as distracting as it has been in the past. 60 mph is achieved from rest in 6.5 seconds with a manually shifted model, or 6.4 seconds if you opt for the automatic gearbox. The significant dose of extra grunt over the base model will make the S the obvious choice for those who really want to experience the "go-kart like" performance that Minis engineers sought to retain in the new car, and the raucous crackles and pops emanating from the exhaust system when lifting off the throttle serve to ratchet up the sense of drama in the S model.
In terms of handling, the Mini still retains much of its rough-and-tumble harshness from the previous generation. Steering is quick but coupled with a fairly light amount of steering effort given the Mini Cooper’s sporting aspirations. The compromise required to retain that go-kart feel as the Mini gains both size and weight means that ride compliance over uneven and broken patches of asphalt like those we experienced on the backroads of San Juan, Puerto Rico with the Cooper and Cooper S can be fairly jarring at times, though the chassis did win some points for staying settled no matter what we asked of it.
Dynamic Damper Control is a new optional feature, but in practice with the system fitted to our S tester, toggling between Eco, Normal and Sport settings did little to alter how the Mini absorbed bumps and the otherwise unruly elements of the less-than-perfect road surfaces we encountered during our test drive, as our POV video below will atest. The non-S Mini Cooper, fitted with the standard suspension, faired a bit better here, but that’s largely due to a setup more willing to exhibit vertical travel than that of the sportier adaptive system on the S model. When tossed into a corner, both interations of Mini Cooper stayed fairly neutral, with a predictable sensation of push creeping in as the car’s limits of grip approached. Perhaps unsurpsingly, the S model is significantly more adept in terms of both grip and composure, though both models exhibited enough body roll to make the Mini feel like it weighs a bit more than it actually does.
At the end of the day, the Mini is still quite a bit of fun to drive in both casual and spirited driving situations. It’s no longer as shockingly mini as it was not so long ago, but its concessions for the sake maturity do serve to bolster its refinement, comfort, and usability. Still, it was perhaps a member of the hotel staff at the press event who inadvertently said it best when she gazed upon the display vehicles and wondered aloud, "Why do they paint British flags on the cars if they’re made by Germans?"
2014 Mini Cooper / Mini Cooper S
Price: $19,950 / $23,600 (excludes a $795 Destination and Handling charge)
Engine: Twin-scroll turbocharged 1.5-liter inline three-cylinder / Twin-scroll turbocharged 2.0-liter inline four-cylinder
Output: 134 hp – 162 lb-ft torque / 189 hp – 201 lb-ft of torque
0 TO 60 MPH: 7.4 sec / 6.4 sec
Weight: 2675 (manual) / 2795 (auto)
Fuel Economy: TBA
On Sale: Spring 2014
Tags:
BMWCooperMini CooperPuerto Rico