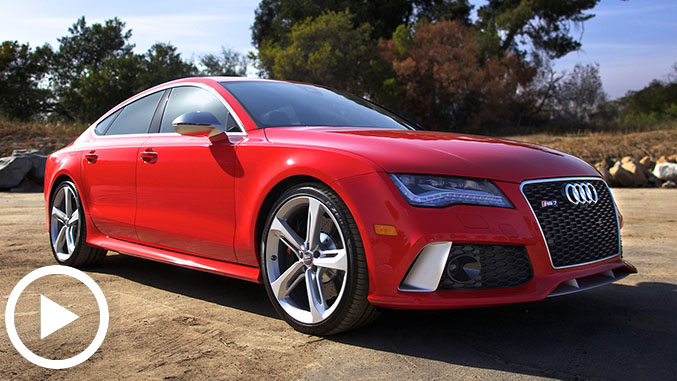 photos by Felix Salazar
If there’s one thing that American Audi enthusiasts bemoan, it’s the fact that we don’t get the all the top-spec performance models that the Europeans do, such as the RS4 Avant and the RS6 Avant sport wagons. Like many automakers selling cars in America, Audi would likely point out that we just don’t buy high performance wagon in significant quantities. They would likely also point out that the Audi RS7 is for sale in the US, has five doors, and is absurdly fast.
What’s the idea behind the Audi RS7?
The RS7 is the top performance specification for the A7 Sportback. Both dimensionally and in the spirit of the concept, the A7 clearly has its sights set on the BMW 5-Series and the Mercedes Benz E-Class. The RS7 is, by that logic, something of an answer to the BMW M5 and the AMG E63, along with the Porsche Panamera. Far from a badge and bodykit affair, the RS7 boasts a 4.0-liter, direct injected and biturbocharged V8 that cranks out 560 horsepower and 516 pound-feet of twist, a sport tuned version of Audi’s Quattro all wheel drive system, uprated brakes and suspension, and dose of sport flavoring to its interior appointments.
Who might want a car like that?
A few years ago, it might have been simple enough to just say "someone who wants all wheel drive", but with all wheel drive standard on the E63 and the Porsche, the equation gets a bit more complicated.

In a broader sense, if you have a family and the need to haul large things quickly whilst awash in luxury accoutrements, and you appreciate understated styling, the RS7 might be your best bet on American soil.
How does the drivetrain of the RS7 perform?
The lower spec S7 uses Audi’s seven-speed dual clutch automatic transmission, same as the one found on the RS5, which we consider to be one of the best dual clutch gearboxes available today. Unfortunately, that unit can’t handle the sheer brutality of the RS7’s V8, so the ZF sourced 8-speed automatic gearbox that has found its way into the parts catalog of nearly every automaker in the industry today finds a home here too. We’ll happily take the ZF unit over some of the mediocre dual clutch boxes out there though – while it’s not quite as sharp as the transmission in the RS5, it really isn’t that far behind, even when pushed hard.

And that 4.0-liter V8 under the hood is more than willing to push hard. "Breathtaking" is an apt way to describe the RS7’s acceleration, as the all wheel drive system and fast shifting gearbox contribute to the sedan’s shockingly rapid ability to get moving. Audi’s official estimate for the RS7 is a 0-60 run in just under four seconds, and while it feels like it might be a tenth or two slower than the BMW M5 Competition Pack we drove earlier this year, we feel comfortable proclaiming that a sprint to 60 miles per hour in 3.7 seconds should be fairly effortless for just about anyone behind the wheel of the RS7. Depending on the option package selected, top speed is electronically limited to 155, 174, or 190 mph.
Perhaps even more commendable than copious amounts of sheer forward thrust is the application of turbocharging here. With boost becoming a more attractive means of adding power while maintaining some semblance of fuel efficiency, automakers are turning to smaller displacement engines with turbochargers – particularly for performance models. The inherent problem though is turbo lag, or the hesitation of full power delivery that occurs when you ask for throttle and the turbochargers require more engine revs in order to spool up and give it to you.
Many builders of high performance automobiles that utilize turbocharging tout that their motors are "virtually" lag free, and point to various instances of engineering wizardry they’ve come up with to combat the problem. However, more often than not, the turbo lag is not only noticeable, it is a point of genuine distraction, and in certain situations it can erode a driver’s confidence. The biturbocharged 4.0-liter V8 in the Audi RS7 is truly lagfree. We could not coax turbo lag out of it when we tried to. We had to check under the hood to make certain that it is in fact turbocharged. This is no small achievement, in our opinion.
How does the RS7 handle?
The RS7 offers several selectable preset driving modes, and one which allows the driver to customize all the variables to his or her taste. Dynamic mode does what the name implies – along with more aggressive shift schedules and sharper throttle response, suspension damping is firmed up substantially, and the speed sensitive steering reacts accordingly as well. In the case of the latter, we found the steering still felt a bit over boosted, particularly on twisty roads with sections that required scrubbing off a lot of speed for a sharp corner, and more mid-corner corrections were needed than we’d prefer given the context of the driving mode and the performance abilities of the rest of the car. Turn in is fairly sharp, and the grip is surprisingly good given the RS7’s girth, but that said, you won’t often forget that this car weights nearly 4500 pounds.

The RS7 is a car that likes to be driven fast, but the feeling that most of the weight is at the front of the car and poised to understeer at the limit is a palpable sensation. But the performance envelope of the RS7 is so high that finding that limit on the street in an RS7 would more or less require a complete disregard for public safety, and those looking to do any serious track work probably aren’t turning to the RS7 as their weapon of choice anyway.
Following in that line of logic, while our tester wasn’t equipped with the optional carbon ceramic brake package, we found little to complain about with the standard steel brakes. They lack some of the top-of-the-pedal bite that we’ve experienced in cars equipped with those high-buck stoppers, but around town that’s often not a desirable trait, and since we couldn’t coax even hint of fade out of the standard system, we’d have a hard time justifying the added expense.
How comfortable is the RS7?
In terms of interior design, it’s clear that Audi took a route based on the RS7 being a very fast daily driver rather than an all-out performance car. The seats have a visual sportiness to them, but they lack a reasonable amount of bolstering to keep you planted during hard cornering. However, if studied from a luxury GT context, the interior of RS7 makes much more sense.

The RS7 does bring a sense of occasion and opulence to the table, which begins with the outside mirrors and navigation screen on the center console unfolding from hibernation in dramatic fashion when you start the car (which you can see in the video below). Unsurprisingly in a car that commands a price tag like the RS7’s, there’s no shortage of leather, wood, aluminum and other premium materials to be found inside, but if you’re familiar with the modern Audi aesthetic, there aren’t too many surprises here, either.
The center stack control scheme in the RS7 is also typical Audi fare, with an iDrive-like button and rotary dial interface which isn’t particularly intuitive, but is also simple enough to use that we suspect it won’t cause too many headaches. Bafflingly, Audi still refuses to offer a USB port as standard on all models, so unless you have the correct Audi MMI-to-whatever-interface-your-device-uses cable, you’ll be using Bluetooth to interact with the car. To their credit, audio streaming works fairly well in the RS7, but it is also notorious for being a drain on the batteries of mobile devices, and since you don’t have a USB port to charge with, well, you get the idea.
Final thoughts?

The RS7 may not frolic down a twisty road like a gazelle, but few cars of this mass do. The centerpiece here is clearly that turbocharged V8, and coupled with Audi’s Quattro system, it makes for some very accessible supercar-level thrust that provides a stirring – if somewhat subdued – soundtrack that befits a luxury sports sedan like this Audi. The RS7’s "sportback" design is a somewhat curious one to our eyes, but for many, the sheer functionality and pragmatism of the five door configuration may win out here anyway.
2014 Audi RS7 Quattro Tiptronic
Price: $104,000 ($122,545 as tested)
Engine: 4.0-liter biturbocharged TFSI V8
Output: 560hp / 516lb-ft
0-60 mph: 3.7 seconds (est)
Fuel Economy: 16 city / 27 highway / 19 combined
On Sale: Now
Tags:
Audi

Ten of the Greatest Designs from Marcello Gandini