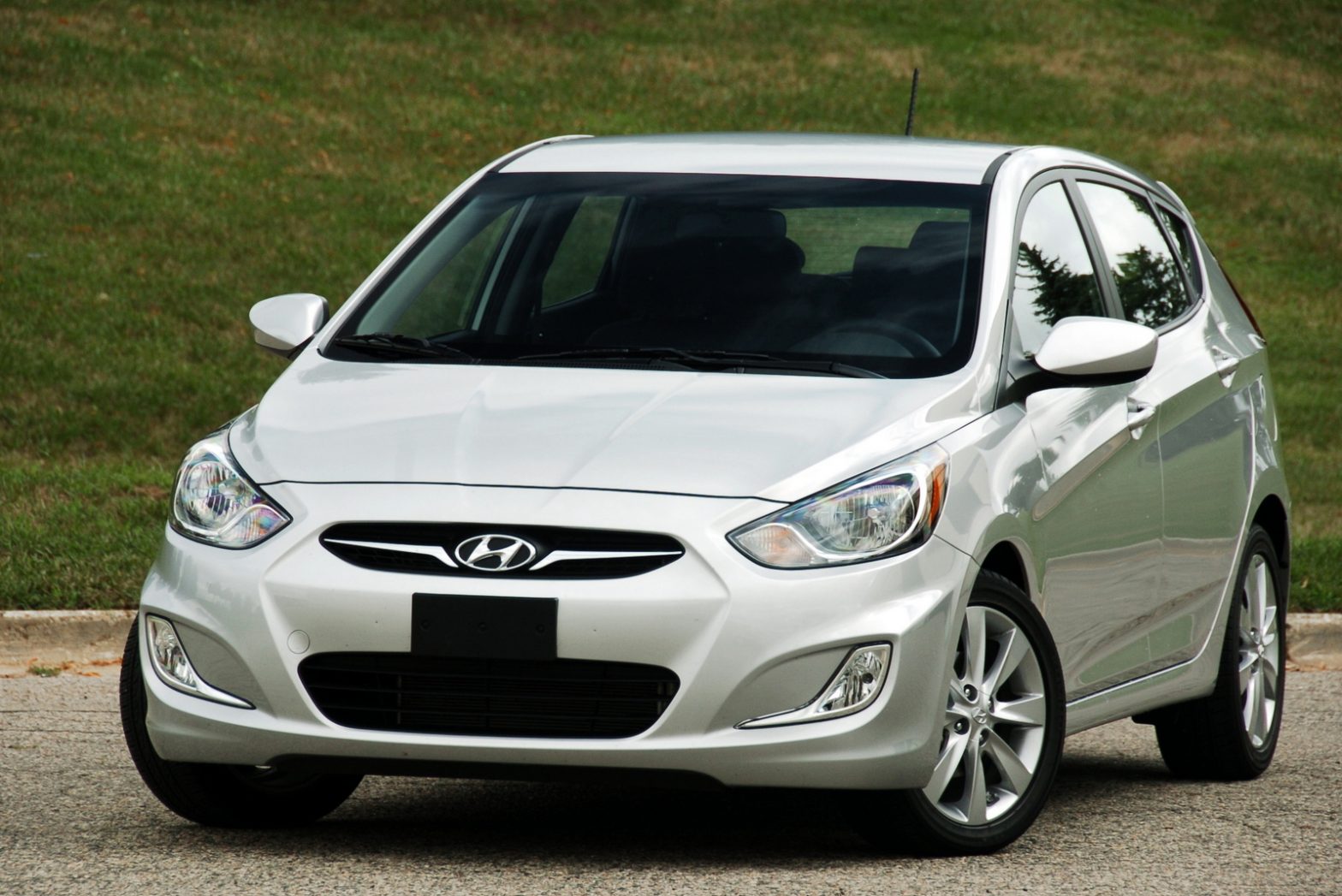 The last generation of the Hyundai Accent was one of the cheapest new cars money could buy. You could pick up a three-door hatch for under $10,000. A fully loaded model rang in well below this new generation’s starting price of $14,195. So while this new Accent has lost the affordability of the old car, it has made some serious gains in the realms of comfort, style, equipment, refinement, and quality, without giving up too much of the slow-car-fast driving fun of the third-generation Accent.
The exterior of the Accent looks to be another evolution of the fluidic sculpture styling that debuted on the mid-size Sonata, and was initially refined on the Elantra. The Accent may be the best looking of the bunch. The creases and character lines look more natural and flowing on the Accent five-door, almost like there is just enough room for the designer to express exactly what he/she wanted. The problem is, the designer’s expression results in a rear window that is tiny at best. Rearward visibility just wasn’t at the level we’d expect from a hatchback.
The interior is also a vast improvement over the old car. No, it isn’t up to the standards of cars like the Ford Fiesta or Honda Fit, but it certainly isn’t bad. The instrument cowl is mainly hard plastic, but the rest of the dash was done in a nicely textured material that looked better than it felt. The piano black trim around the gearshift, radio, and HVAC controls was a fine touch that added an element of class to the interior. The seats and steering wheel were nice, if uninvolving pieces. We’d like to see more aggressive bolsters as we found ourselves hanging onto the steering wheel during more g-inducing maneuvers.
The actual business of driving the Accent was disappointing, if only because this larger model lacked the same level of small-car chuckability that made the last-generation Accent such a fun little deal. The steering felt overboosted, and lacked a real sense of linearity. Overall feedback was lacking, as we found ourselves relying more on the suspension to convey a sense of grip levels. The suspension itself was firmer than something like a Ford Fiesta, but it lacked the road-holding nature of the comparably priced Mazda2. Body roll was neatly controlled, with squat in dive kept neatly in check.
The increased power of this new Accent is a welcomed improvement over the old car. The 1.6-liter, direct-injected four-pot delivered a respectable 138 horsepower and 123 pound-feet of torque. Hauling around roughly 2600 pounds, it felt about as brisk as a comparable Honda Fit Sport (117 horsepower and 2617 pounds), and markedly faster than the lighter but less powerful Fiesta (120 horsepower and 2575 pounds). Power off the line was decent, but it was mid-range power that felt the best. The shift logic of the six-speed automatic was fine in all but the most aggressive throttle tip-ins, when it would hesitate just slightly before dropping gears. In most other circumstances, it performed unobtrusively. We also enjoyed the select-shift mode, which delivered rather snappy upshifts and downshifts. The addition of some steering wheel paddles would have been nice, though, as the floor-mounted shifter required you slot it to the right to get into manual mode.
The Accent is an odd car in that it does well in just about every area. The interior is better than a Mazda2 or even a Nissan Versa, but not quite up to the standards of a Fiesta or Fit. The driving experience plays second fiddle to a 2 or Fit as well, but it’s a step up from a Fiesta. In short, it does just about everything well, without excelling in one particular area. We miss the old Accent due to its chuckable nature, but this new car does a good enough job of retaining that drivability while adding in a great deal of class, style, and refinement, which makes it a winner in our books.
VS: Ford Fiesta
Opt for even a basic Fiesta five-door with the PowerShift dual-clutch transmission, and you’ve already outpriced our Accent SE five-door auto. As tested, our car would cost $16,925. Before tacking any options on to our hypothetical Fiesta, we are already at $17,390. Tick the option box on a popular extra like Sync, and you are pushing pretty hard against the $18,000 barrier. Simply put, the Accent wallops the Fiesta when it comes to pricing.
True, the Fiesta boasts superior interior refinement. The Accent boasts room, though, with an extra five cubic feet of passenger volume, as well as an extra two inches of rear legroom. You’ll also snag an extra seven cubic feet of cargo space and better fuel economy (30 city and 40 highway for the Accent, 29 city and 38 highway for the Fiesta).
VS: Nissan Versa
Besides the arguably better styling, the Accent beats the Versa in a few key areas. First and foremost, you are getting considerably more power. The Nissan only produces 109 horsepower and 107 pound-feet of torque, 29 horsepower and 16 pound-feet less than the Accent. It is considerably lighter, though, thanks to a 2459-pound curb weight. That being said, it never feels quick, thanks in large part to its fun-sapping continuously variable transmission. This tranny simply doesn’t make as good a use of power as the six-speed auto in the Accent.
The Versa is able to match the Accent’s 30-mile-per-gallon city rating, though. Highway economy is lacking at 38 mpg. The Nissan also boasts five more inches of rear seat legroom, but it’s in a cabin that feels considerably cheaper than the Hyundai. The Nissan utilizes more hard plastic than the Accent, and the layout is much blander as well.
2012 Hyundai Accent SE Five-Door
Engine: Inline-4, 1.6 liters, 16v
Output: 138 hp/123 lb-ft
Weight: 2654 lb
Fuel Economy, City/Hwy: 30/40 mpg
Base Price: $14,195
As Tested: $16,925
On Sale: Now
Tags:
Ford FiestahatchHyundai