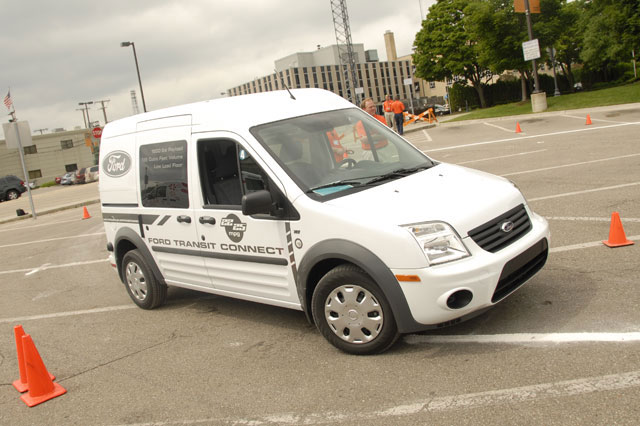 This wasn’t what we were expecting for a “first drive” experience. Instead of being let loose on Metro Detroit’s highways and byways, we were given a carefully planned route in and around the quaint town of Royal Oak and were told to make pit stops at three different businesses along the way. We talked with a catering company, kitchen and bath remodeling shop, and florist supply service about the ways in which the Transit Connect could be a useful tool for small companies who normally had to rely on large cargo vans (Dodge Sprinter, Ford E-Series) or light-duty trucks for their shipping and delivery services. The Transit Connect’s small size, low price point ($21,475 MSRP), and easy-to-maneuver qualities make it a great solution for businesses looking to affordably haul. And the icing on the cake? The little Ford van is pretty good to drive, too.

Aside from some minor U.S.-spec tweaks, the Transit Connect you see here is essentially the same vehicle that has been on sale in other markets since late 2002. In that time, the TC has garnered the praise of the Global automotive press, even winning the International Van of the Year award. And now the Transit Connect comes to North America, boasting 135.3 of usable cargo space, 1600 pounds of payload capacity, and not-too-shabby fuel economy numbers of 22 miles per gallon in the city and 25 mpg highway.

Powering the Transit Connect is Ford’s Duratec 2.0-liter inline-four from the Focus, mated solely to a four-speed automatic transmission. This engine only cranks out 136 horsepower and 128 pound-feet of torque, but even when driven with the maximum payload, the Connect still felt peppy and eager to run about town. It’s no rocketship, and the engine does sound rather coarse, but it’s still a pretty spirited little vehicle to scoot around in. Besides, if this van is supposed to be an attractive sell to businesses, it doesn’t need to have sports car performance, just point-A-to-point-B usability. In other markets, the Transit Connect is available with a turbo-diesel engine and a manual transmission, and when we asked Ford about the potential of oil-burning examples making their way Stateside, the executives simply shook their heads and changed the topic. The big powertrain news, however, is that the Transit Connect will be sold as a battery electric vehicle (BEV) starting late next year—Ford’s first all-electric product—capable of going up to 100 miles on a single charge and able to hit speeds up to 70 miles per hour.

In all other aspects of driving, there’s nothing terribly exciting about the Transit Connect, but it still moves down the road with decent poise. The steering feel is nicely weighted and the little van is quite easy to maneuver. Ford boasts that the TC has a 39-foot curb-to-curb turning circle, and after piloting our test car through a series of figure-eight exercises, we don’t think anyone will have trouble making their way through tight city streets and alleys. The braking feel is a bit soft, though this is probably a good thing for those hauling precious cargo. All in, the Transit Connect doesn’t offer any sort of unique driving feel, but we still enjoyed it immensely.

Obviously, the big story here is work-oriented utility, and that’s where the Transit Connect really shines. The optional Ford Work Solutions interface houses everything from an on-board computer with e-mail, a remote desktop interface, and even a wireless printer to the Crew Chief system which allows business fleet managers to track the statistics of each vehicle (tire pressure, oil life, etc.) in their pool. There’s even a Tool Link feature in which a driver can tag all of their work necessities and scan the vehicle when they’re done at a job site to make sure everything is accounted for. Try doing that with your Sprinter.

Customers will have their choice of three body styles. The panel van and cargo van are essentially the same—a cage behind the front seats with no side windows and a flat load floor, though the cargo van comes with windows on the rear doors. In either case, rear parking sensors are available to aid with the lack of visibility. In wagon configuration, a second-row bench is added, as well as side windows, perfect for consumers who don’t need the Transit Connect to be strictly business. The seats themselves are rather comfortable and supportive, and only available in cloth upholstery. The rest of the interior is made up of hard, gray plastics, but given the TC’s work-oriented focus, this doesn’t bother us at all. Everything inside feels well-built and really solid.

What Ford has done here is give America a compact, useful van which can be outfitted to meet the needs of nearly anyone looking for utility on the cheap. It looks good, drives quite well, and offers a host of technological gadgets that will be very useful to all sorts of businesses. We hope Ford sells billions of these things.