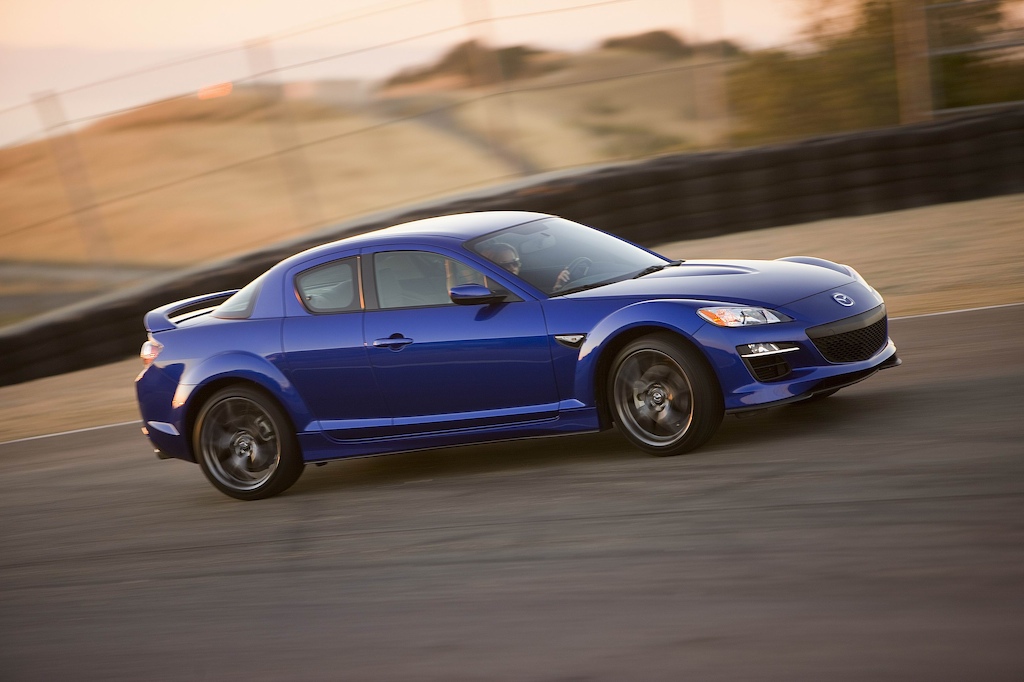 We were recently lucky enough to have Mazda’s RX-8 R3 in the Winding Road office for a week. Truly touched by the car’s utter brilliance for a relatively small sum of money, Editorial Director Tom Martin declared that he could justify the Mazda’s abilities versus any sporting car on sale today.

In the spirit of friendly spitball lobbing, WR’s Seyth Miersma proposed a set of five “challenge” cars for the RX-8, along with a summary of what makes them each so special, to which Tom responded in kind (and sometimes, unkind).

Read on for the in-house tête-à-tête, and be sure to let us know what you think of each of the match ups, or cars you think might have fared better against the mighty RX-8. Who knows, you might even get Tom to slug it out with you, too…

Pound for pound, dollar for dollar, the Mini might just be the greatest performance car on sale today. The Mini can rotate quicker than Barry Sanders in his prime, and has grip that’s nigh onto supernatural for the hatchback set. The turbocharged motor has more torque than the Renesis rotary, and the Mini has less weight to shove around with it. Ah, did I mention the Cooper S is about $10K cheaper (than the R3 RX-8), too?

Brilliant as the Mini is, Seyth forgot to mention one key phrase: torque steer. The RX-8 with rear wheel drive simply feels more balanced and willing when putting the power down coming out of a corner. The engine has more character and the shifter is better too. The RX-8’s back seat is significantly more usable for adults. Oh, and Seyth obviously didn’t major in math. If we want to compare base versions of each car, the difference in MSRP is $3695. No effort at all is required to option the Mini up by $5-6K, so we’re still talking about a $4K difference when a properly equipped Cooper S takes on the RX-8 R3. That isn’t zero difference, but I’d rather be negotiating with my Mazda dealer than my Mini dealer.

More hardcore, faster, and better looking—does that sum it up? Nissan’s SynchroRev Match gearbox will make you feel like a downshifting hero, and help you get around the circuit faster. The sound of the VQ V-6 on full song is akin to Lucifer’s death metal band. (By comparison, the RX-8 sound like it’s powered by humming birds.)

More involving, more refined, and more useful—does that sum it up? The RX-8’s rotary is a joy to rev and shift, in contrast with the truck-derived thrash and vibration as you try to wring some sense of pace from the 370Z. The RX-8’s steering delivers excellent feedback, and the chassis majors in communication. The 370Z seems like a benchmark until you get in the fluid RX-8, at which point the 370Z is revealed as ever so slightly inert. The $7K in your pocket doesn’t hurt either.

BMW’s 3.0-liter diesel motor has more than double the torque of the Mazda, with strikingly better fuel economy, too. Add to that the joy of the 3-Series chassis and suspension tuning, high-speed refinement, and an interior that doesn’t look as though it was designed by the guys who dress up as cars for their weekly Initial D Club meetings. Can we all act like grownups now?

The 335d is a one-night stand (admittedly with someone pretty hot) compared to the lasting relationship of the RX-8. The mid-range whack of the diesel seems impressive, but it happens and then we’re done. By contrast the RX-8 offers pleasure up and (mostly) down the rev band. You have to work at it a bit, which is kind of the point, with the result that the RX-8 rewards in many situations where the 335d is merely good. And you get to work at it because the RX-8 offers a proper manual, whereas the 335d is slushbox-only. The RX-8 chassis seems more responsive, and you just sense that you aren’t pushing as much weight around—because you aren’t. Or as much money. This time, we’re $15K ahead.

If you had to pick one (driver’s) car to have for the rest of your life, you’d have to give some serious consideration to the Boxster S. Supremely balanced with goodly power, the Porsche also has controls (steering and manual gearbox) that are full of feedback and precision. Seven words you never hear together: “I’m really sorry I bought that Boxster.”

In many ways, the Boxster feels the most like the RX-8 of all the cars under discussion here, which is a compliment to both cars. Too bad the Boxster’s shift mechanism can’t quite match the mechanical feel and short throw of the RX-8’s tranny. Too bad the Boxster runs out of legs at 6400 rpm, a point where the RX-8 still has 2000 revs to go. Too bad Porsche’s excellent steering engineers didn’t spend more time studying the weight and feedback of the RX-8. And even with the base Boxster (realism alert: try buying one with zero options), we’re still $15K in the hole. With the Boxster S, we’re down enough to buy a Spec Miata, used truck, and trailer.

The R8 has supercar reflexes, supermodel good looks, and can be easily used to make a quick trip to the supermarket. A pretty smart all-rounder, you must admit. Maybe the R8 isn’t fast enough to warp time (at least in V-8 trim) but this car is still strikingly quick, and it’s blessed with a level of detailing, inside and out, that makes the six-figure price tag seem completely reasonable. Women really, really love this car—we’ll just throw that out there.

C’mon man. The RX-8’s back seat is massively better than the carpeted slot on the R8, the RX-8 has a bigger trunk and the RX-8 has better fuel economy! Seriously, as far as driving dynamics go, the R8 does what the RX-8 does, and does it mostly a little bit better. If the R8 manual had the throws and precision of the RX-8, I’d say the win goes to Audi, hands down. But, also seriously, folks, we’re talking $82K more to do a little bit better with a dash of style?