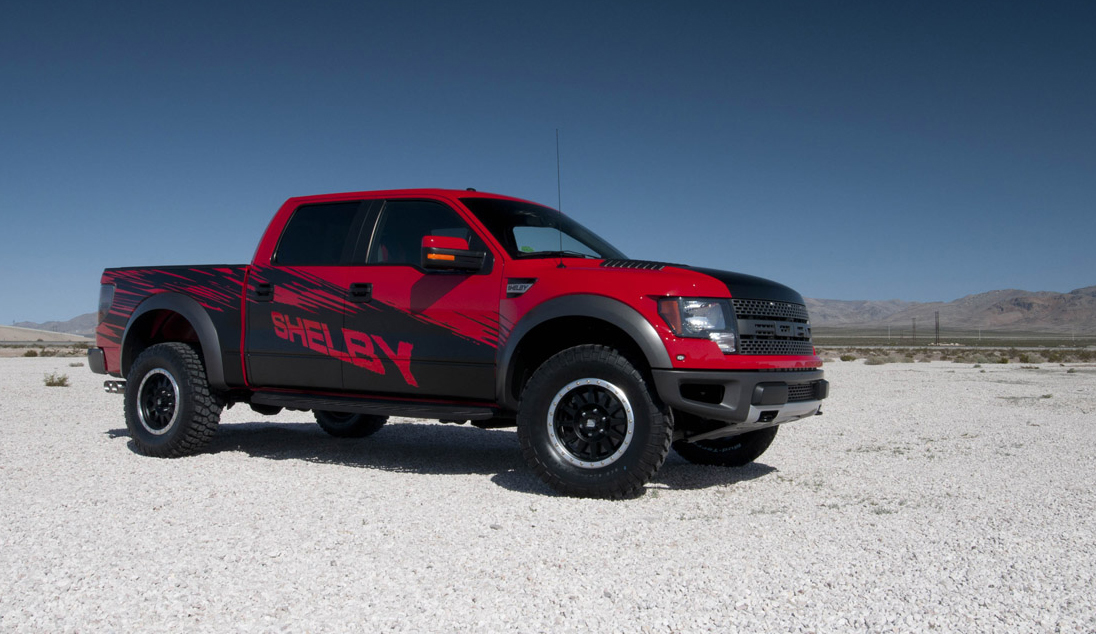 This is the Master Landing Page for the Shelby Raptor. From now on, as we further review this car, we will be updating this page with whatever fresh content we create. Future drive reviews, updated specifications, videos, and other relevant information will all be found right here, in one convenient spot.
SUMMARY
If you thought the Ford SVT Raptor wasn’t badass enough of a truck, Shelby’s got something for you. Today, they unveiled the 2013 Shelby Raptor at the New York International Auto Show.
A 2.9-liter supercharger and Borla exhaust boost the 6.2-liter V-8’s output up to 575 horsepower. Power goes to all four wheels via a six-speed automatic with manual mode.
It rides on 35-inch Goodrich All-Terrain tires, and offers optional custom wheels. It also has an Off-Road mode, which optimizes the transmission and stability and traction control for taking the truck into the wild.
Only 100 will be made per year, and it will be a $17,995 upcharge from the base Raptor.
Read on for more details in the press release, below.
SHELBY AMERICAN DELIVERS BIG POWER IN A BIG PACKAGE,
UNVEILING THE ULTIMATE MUSCLE TRUCK AT NEW YORK AUTO SHOW
Shelby American, Inc. today unveiled the new Shelby Raptor, one of the most powerful, exciting and collectable off-road production trucks, during the New York International Auto Show. The Shelby Raptor marks the return of the Shelby muscle truck and is based on the 2013 Ford SVT Raptor with enhanced power and handling, topped with “Shelby Style” inside and out.

“As a native Texan, Carroll Shelby loved powerful trucks,” said John Luft, president of Shelby American. “Carroll connected his love for trucks with his passion for performance on several projects, with the first one over 30 years ago. The latest Shelby truck was created to conquer any terrain with serious velocity.”

Shelby American takes the impressive Ford SVT Raptor and adds some “Shelby Magic” to create the ultimate muscle truck. By forcing air through a 2.9 liter supercharger mounted on the massive 6.2L V8 engine, and then out of the Shelby Borla exhaust system, Shelby American takes the stock 411 HP rating and kicks it up to 575 HP. A six-speed automatic transfers power to all four wheels and features a manual mode to give the driver complete gear selection control.

“Aerodynamically speaking, the Raptor was engineered for maximum performance,” said Gary Patterson, vice president of operations. “We spent our efforts improving the power, cooling and handling systems because every Shelby is built to excel under even the most extreme conditions.”

Equipped with 35-inch Goodrich All-Terrain tires and optional custom wheels, the Shelby Raptor stays connected to any ground it faces. The “Off-Road” mode calibrates the transmission, stability and traction control systems to operate in harmony under high-speed off-road situations. In addition, any of the three Shelby graphics packages will help set it apart from every other rig on the road.

“The Shelby Raptor was an absolute thrill to test across the Nevada desert,” said Vince LaViolette, Shelby American’s test driver. “The suspension system allows the Raptor to go over, around or through just about any obstacle. When more power is needed, just stroke the gas to spool up the supercharger and make the big tires rip.”

The post-title package starts at $17,995, not including the base Raptor. A limited production of 100 Shelby Raptors will be built per model year and each will be numbered and documented with a unique Shelby CSM number and entered into the official Shelby Registry.

“The Shelby American line up now has something for everybody,” added Luft. “We continue to offer the legendary Cobra sports car, along with our GTS, GT350, Super Snake and Shelby 1000 based on the current Ford Mustang and Ford Shelby GT500 vehicles. We took a page out of our history by bringing back Carroll’s beloved front wheel drive ‘pocket rocket’ with the Shelby Focus ST. Since Shelby American’s first official appearance was at the New York Auto Show over 50 years ago, it’s fitting that our ‘biggest and baddest’ product unveil of the year, the Shelby Raptor truck, would occur in Manhattan.”

Shelby American is now accepting orders for the limited edition Shelby Raptor truck. Those interested in reserving a truck should contact the sales team at (702) 942-7325 or visit www.shelbyamerican.com.

Subaru Has Announced The Ultimate BRZ