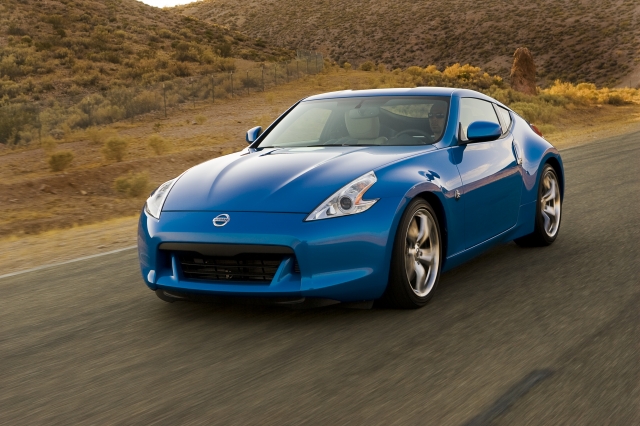 Downshifting from third into second for an especially tight right-hander, Nissan’s 370Z makes a soaring, rev-matching howl that radiates through the desert like thrown-stone ripples in a quiet pool. It’s the sort of bellicose and randy whine that alerts motor-minded schoolboys to prick up their ears, setting the would-be racer’s heart to flutter. The uninitiated might assume that the sonorous growl of a lone sports car in the desert may simply evaporate into the vast distance, but our tour of the stark, southern Nevada moonscape in the newest Z proved that to be untrue, with the hard scrabble surfaces acting more like an echo chamber for the roaring V-6 and a sonic lodestar for anyone within earshot.

Sound, its intensity, character, or in some cases, lack, is a hugely important characteristic for any vehicle, and doubly so for sports cars like the 370Z. The Nissan coupe, an unmitigated and rich aural experience, is in large part defined by its sound. Part of that auditory splendor is the product of Nissan’s new, and rather brilliant, SynchroRev Match feature on its close-ratio six-speed manual transmission. As advertised by its name, SRM does and amazing imitation of a practiced and perfect heel-toe shift, blipping the throttle as one changes up or down through the gears to effect a smooth, effortless, and surprisingly satisfying shift. To the casual passerby this function gives the impression that any 370Z driver is some kind of talented hooligan, stroking the VQ-series engine at every stoplight, stop sign, and crosswalk in town. Thankfully, Nissan has seen fit to include a cutoff switch for the SRM system, allowing for quieter and more anonymous operation should one require it. We didn’t.

We also sampled a 370Z with Nissan’s optional and capable new seven-speed automatic transmission, complete with flappy paddles and another rev-matching system for downshifts. The unit functions crisply going up through the gear range, and slightly less so on the downward trip, but overall it just left us flat after the genius of the new six-speed. Do yourself a favor; buy the manual if you’re going to buy this car.

Part of the reason we feel so strongly about transmission choice for 370 buyers is that the manual had us feeling so wonderfully in tune with a really wonderful V-6 engine. Nissan has bumped displacement of the mill up to 3.7 liters from 3.5, added its Variable Valve Event and Lift system, and improved output by 26 horsepower (totaling 332) as a result. It’s the adjustable valve trickery, more than the outright power increase that has the biggest impact for the driver though—the new VQ feels far steadier pouring on the juice throughout the rev range and much less likely to feel out of breath if one misses the occasional downshift before a slow corner. (This came in especially handy while lapping a tight racetrack, but more on that later.) VVEL is also really effective for the causal, short-shifting driver, offering more pop down low than the 350Z would have been willing to muster.

We were lucky in that part of our Z drive was under the auspices of, and on the fabulous facilities of the Spring Mountain Motorsports Ranch, a first-class racing facility nestled in desolate Pahrump, Nevada. Spring Mountain’s 1.5-mile course gave us ample opportunity to explore near the outer limits of Nissan’s handling and performance, as well as a safe-ish way to get a bit more foolish than would be advisable on public roads. Nissan engineers made a special point to emphasize that they consider the 370Z’s 54/46 front/rear weight balance to be ideal, noting that such a split allows for a perfectly even 50/50 under the load of a hard corner—just the time when a car’s balance really comes to life. When pushed into a bend, the Nissan grants to its driver the feeling of being completely centered, as if in the stationary middle of two outwardly rotating masses. Once embraced, this sanguine method of cornering gave us the confidence to push the Z harder and harder into increasingly familiar turns. The utter stiffness of the 370 package (30 percent stiffer in the front and 22 percent stiffer in the rear versus the 350) helped our confidence as well, by mitigating chassis flex and roll to such an extent that it was virtually unnoticeable.

Outside of the sanitized track atmosphere and out on the open road, the Nissan remained both fleet, and agile of foot, though we became increasingly aware of a dearth in road manners. As lovely and song-like as the 370Z’s engine was when driven in anger, it couldn’t help but be overwhelmed by the booming drone of the rest of the road noise. Some synchronicity in tire roar, wind bluster, and monotonized engine sound at a highway tilt, creates a ruckus that is rather unpleasant in the two-person cabin. It may be a bit unfair to praise the throaty engine and stellar grip with one side of our mouths, and damn their discordant hubbub with the other, but the fact remains that even hardcore owners won’t be driving at ten-tenths all of the time—and the most leaden foot may still want to hear the stereo on occasion.

Problematic noise to the side for a moment, the updated Nissan cabin is a fairly respectable place to pass the time, as long as one understands that the functions of driving have been given more than equal time in its execution. Deep and fitted bucket seats strike a clever balance between bolster and comfort, and provide better than adequate adjustment on the road to the ideal driving position. (We’d be remiss if we didn’t note that the steering wheel is adjustable for rake but not for reach, perhaps not a deal-breaker for most, but potentially annoying for those of slightly irregular proportions.) Nissan has added thoughtful and driverly touches, like a pad against the transmission tunnel within the foot well that serves to cushion one’s knee during the natural bracing that takes place in a hard corner. The steering wheel is pretty standard Nissan fare, thicker of diameter and nicely weighted, but using the same style, dual thumb switches, and blade-like paddle shifters (for the auto) as can be found in the new Maxima. Those looking for utter refinement will struggle for purchase in the Z’s cabin, though in full-leather trim it is far more fetching than the 350’s affair, as it still seems as though Nissan’s interior design department is a few years behind the bleeding edge of the industry. For instance, the 370Z may be all of a match for the new Ford Mustang GT on the track but most definitely lags behind the pony car’s high-spec new driver’s area.

Those quibbles with cabin fit and finish, a sometimes unrefined nature, or personal issues with styling (we found opinion about split on the roundish redesign, you can make up your own mind), go quickly out of focus when the scene shift’s back to something like our desert romp. Digging deeper into each corner, pushing faster mile after sun-setting mile, and listening pointedly to the song of a true sports car hard at work, we can tell that the 370Z is a success before even the first car is sold. The car has, for lack of a more perfect descriptor, soul. And it has it in spades. Expect to hear big things from this Nissan.

List: Top Ten Most Beautiful Subarus (In No Particular Order)