Infotainment, Reviews I By Winding Road Staff I July 06, 2022 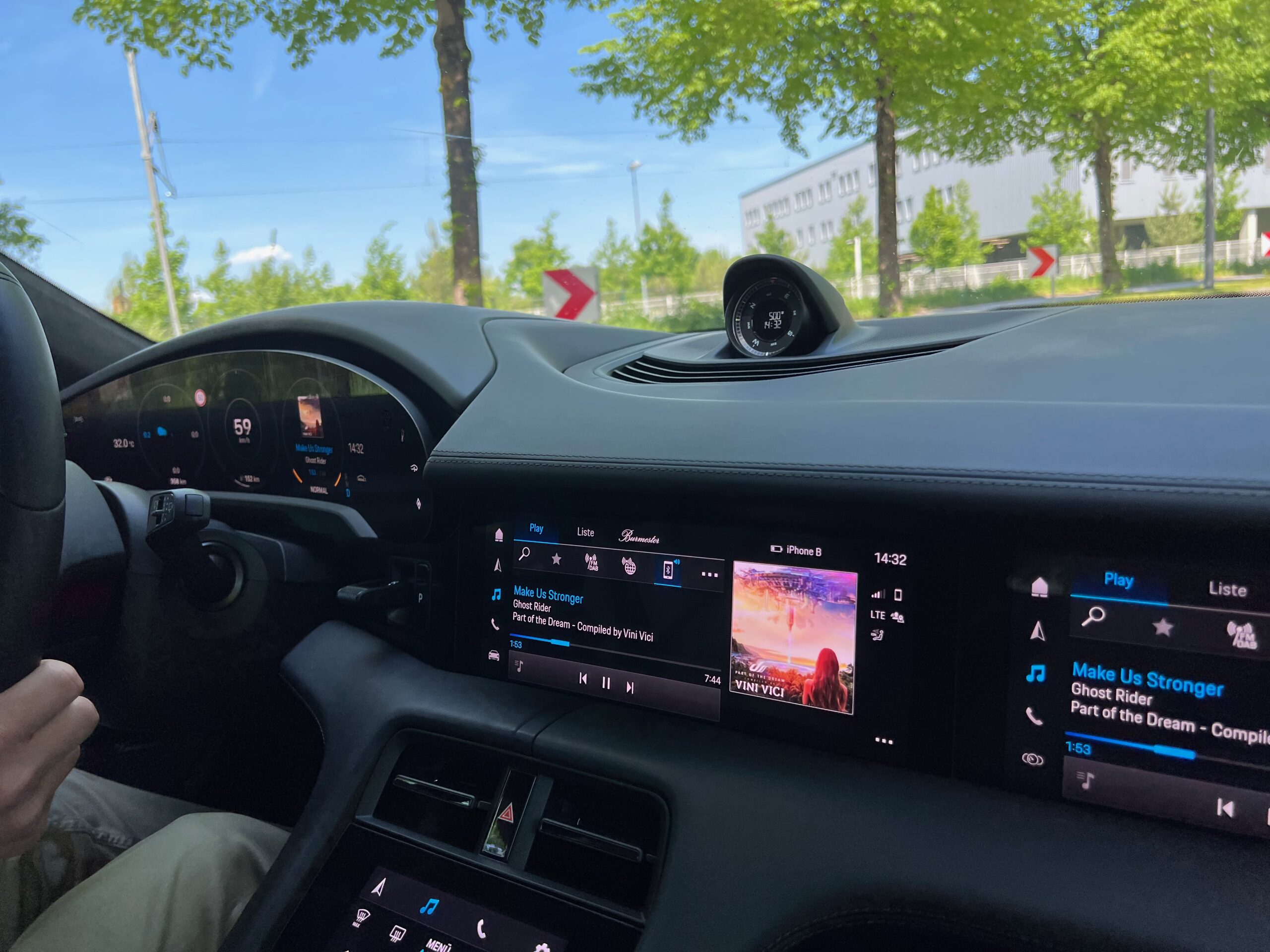 We rarely cover in-car audio and despite the Munich High‑End show being surrounded by automotive excellence (there’s a car museum just opposite and it sits amid some of BMW’s design offices and transport hub), you rarely get to hear car audio. So, in a way, the breaks between in-car listening sessions gives you an opportunity to see just what’s changed.

Here’s another thing you don’t hear too often around audio shows; discussions about “the delta of technological development”. This is because domestic audio is an extremely mature branch of consumer electronics and much of its fast-paced development cycles are long in the past. Sure, there’s been significant change in materials science, improvements in precision and accuracy across the board and developments into streaming, DSP and Dolby Atmos are big technological changes, but contrast that with our continued love-affair with valves, open-reel and LP replay.

All about the Delta

When it comes to in-car, however, it’s all about that delta; the rate of change and improvement in car audio has been remarkable and continues to develop at a blinding pace. There are several good reasons for this; the increasing move toward electric cars has reduced the noise floor inside the cabin of many cars, DSP is becoming increasingly powerful, the control surfaces of a modern car are completely different to a vehicle made even four or five years ago, and the recognition of the importance and significance of good audio in car has increased in the wider public. And it’s in this world, we see the Porsche Taycan Turbo Cross Turismo, fully equipped with the latest Burmester in-car system.

This fits well because one of the last major in-car projects we covered was also a Burmester in a Porsche Panamera and how the intervening years have changed the experience is profound.

Over the years, the car interior has moved from one of the worst places to experience good sound to one of the best. Once again, DSP has played a major role in this, creating a digitally controlled environment to compensate for all those pesky glass surfaces you need in a car for trivial things like seeing where you are going and oncoming traffic. But it also helps that forward-thinking car designers are now working in harmony with audio engineers to make the interior of a car a more audio-designed area. This takes advantage of the predictability of a car’s interior; you know the volume of the listening space almost down to the square centimetre, the number and position of listeners is extremely predictable and even road noise can be compensated for in this context. Granted, no one wants to completely rid themselves of road noise (you might want to be able to hear that truck-driver’s horn blaring at you in an emergency), and the concentration required of the driver shouldn’t detract from a fully immersive listening experience… for them at least.

All of which we know well, and none of which prepares you for just how far the audio system in the Taycan has come over the years. In fairness, the Porsche in-car experience of old was pretty good to begin with, but it was competing with a lot of engine noise and many of us in the audio press can remember sitting in a car with the late Dieter Burmester playing music at ear-splitting levels with truly gut-punching bass. That powerful experience can still be realised within the Taycan, but the years of co-development from both Porsche and Burmester and the reduction of engine noise from loud exhaust to space-ship like whirring means there is so much more on tap.

This is a more refined, more integrated experience now. It’s very much in line with the changes to the car itself (in the widest context). The user experience is now far more geared toward interaction with your music both in car and in the smartphone that we all have. It’s also even more geared toward the individual user experience. Where this has changed over previous models is that combination of improved DSP and better driver placement within the environment means the jump from when the DSP was directed at your seat in the car is not so marked. Yes, the ultimate experience is tailoring the sound to a specific seat in the cabin, but when that tailoring is set broader (or even when it’s tailored to someone else in the car) the sonic experience is still excellent.

In the past, there were always caveats and excuses why in-car does ‘almost’ everything the home audio system can muster. Now, those caveats stop at ‘well, it won’t play LPs!’ The experience is not dissimilar from the home listening experience now, just with more customisation to suit your listening style.

The phone connection is more seamless than ever too. Listeners can cast to the system with ease and the performance is good enough to be contingent upon the source rather than the system. Listeners are presented with a stereo stage that can be shaped but typically sits slightly in front of them, with excellent central presence and articulation. This is surprisingly precise too; not quite the soundfield generated by carefully placed electrostatics in a well-maintained listening room, but an order of magnitude better than the amorphous blob of sound drenching the listener that used to be the best you could get from an in-car experience of just a few years ago.

Rhythm is an interesting aside for most in-car audio systems. First, there’s a lot of competition, as much road noise has its own metre and this is perfectly designed to undermine the pace and timing of an in-car system. What’s more, you don’t want too ‘pacy’ an in-car experience, as anyone who wondered where their driving license went after driving along to The Prodigy or Infected Mushroom will attest. You want it ‘rhythmic’ but not too ‘rhythmic’ in car, and the performance of the Burmester system does that well. It has good rhythm without exaggeration. It’s also energetic and exciting at the treble, natural and lithe in the mid and powerful in the bass. These standards can be shaped slightly to taste but fundamentals of the system are good regardless of DSP adjustment.

Get ahead of the curve

It’s also worth discussing the changes to the control surfaces, especially if your experience with modern in-car entertainment is a few years behind the curve. The choice of words there is deliberate; where once there was a tiny screen to augment the hard buttons on the centre console, there’s now a curved touchscreen that extends across the length of the front of the cabin. This allows the listener in the passenger seat to have as much control over the in-car entertainment as the driver; more in fact, as the driver’s panels are tuned toward driving for obvious reasons.

In fact, perhaps the only downside to this new user experience is the right foot of the driver. If you are reaching for the touch-panel in front of you as the driver decides to unleash electric mayhem, sheer G-force will pin you to your seat and that outstretched finger will slap you in your own face. A second or two later when you have stopped groaning and swearing, and your sight returns, play with that panel control.

We didn’t spend too long in Burmester’s Porsche Taycan Turbo Cross Turismo, but in a way we didn’t need to. A few seconds on the street shows just how far we’ve come and it makes you think what’s next. As discussed earlier, Dolby Atmos is a likely future inclusion, possibly depending on uptake. My guess beyond that is individual DSP-controlled pseudo anechoic anti-noise ‘privacy chambers’ for the passengers; theoretically, you could have four people in a car listening to four different musical pieces with no bleed-through between them, without need for headphones. I think that’s still some generations of DSP away now, but the level of improvement in performance and just sheer effortless integration that Burmester’s system in the Porsche Taycan suggests anything is possible!

Dr. Dre might want to stick to making hip-hop. This is a surprisingly bland system that generally doesn’t sound bad, but rarely sounds very good. The problem is that the midrange is depressed and uneven, the bass is blurred and the treble only just above average. The system will play loud enough for our tastes (though based on what we hear from neighboring cars, we’re on the demur side when it comes to cranking it). It also manages to keep complex instrumentation from collapsing in a muddle. But it just doesn’t sound as clear or balanced as most premium systems, despite extensive twiddling with the EQ.