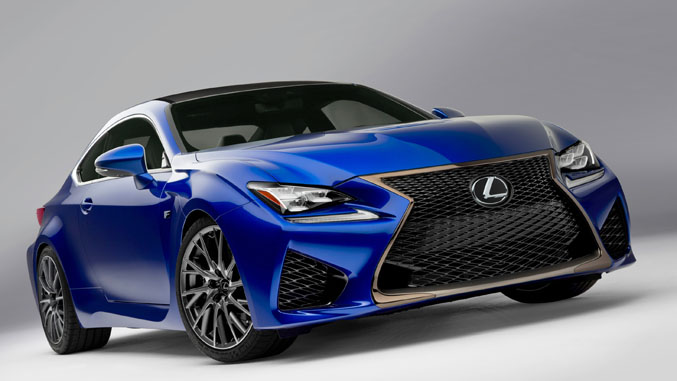 This is the overview page for the 2015 Lexus RC F. From now on, as we further review this car, we will be updating this page with whatever fresh content we create. Future drive reviews, updated specifications, videos, and other relevant information will all be included here.

Back in November at the Tokyo Motor Show, Lexus unveiled the production-ready RC Coupe. While the RC Coupe certainly looked the business, with a choice of either a 314 hp V6 or a 2.5-liter Lexus Hybrid Drive system, RC and IS chief engineer Junichi Furuyama stated at the time that the RC Coupe was designed to ”deliver extra response that exhilarates rather than overwhelms drivers”. We took that as an indication that this new coupe might end up being a lot more show than go. Fortunately, it turns out that the overwhelming level of performance was being reserved for another variant of the new coupe: the RC F. Lexus is still pretty tight-lipped about most of the details, but here’s what we’ve been able to pin down thus far.

Borrowing heavily from the parts bins of both the IS F and the LFA supercar, the RC F will deliver that performance by way of the 5.0-liter V8 derived from the IS F, here making 455-hp at 6800 rpm and 401 lb-ft of torque at 5200 rpm. Power will be routed through the Sports Direct Shift eight-speed automated manual transmission, also borrowed and revised from its use in the IS F, and will offer Normal, Sport and Snow driving modes. 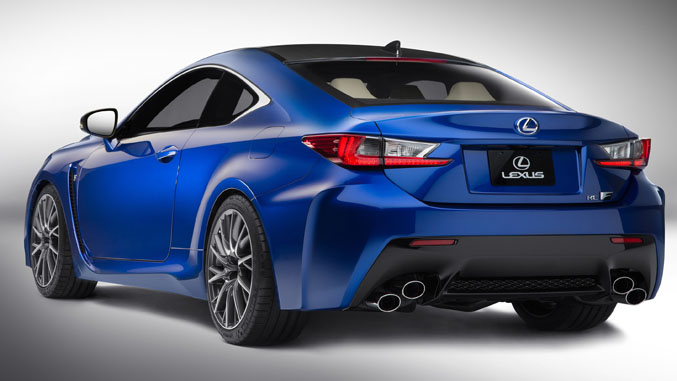 Sitting 15mm lower than the standard RC Coupe, the RC F rides on a new chassis featuring a reinforced subframe, uprated springs and sway bars, Sachs monotube shock absorbers, unique control-arm rear suspension, and a specially tuned version of the Lexus Dynamic Handling system. Contact with the asphalt will be made via a set of 19-inch BBS wheels wrapped in Michelin Pilot Sport PS2 rubber, and to reign in all this newfound performance, Lexus co-developed the RC F’s braking system with Brembo, resulting in a six-piston front and four-piston rear system which sees slotted rotors at all four corners. 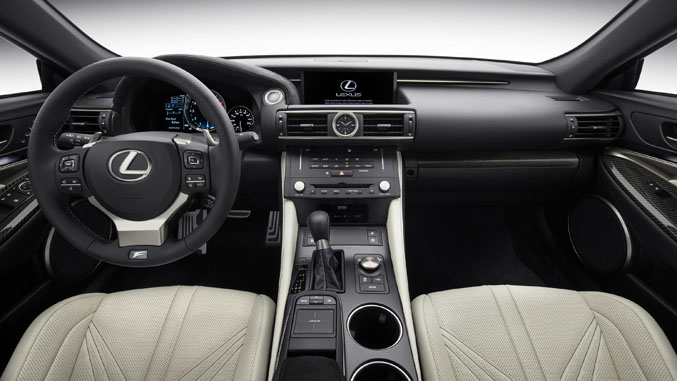 Taking a few more cues from the LFA, the RC F will also make extensive use of carbon fiber, which will be used for the hood, roof and trunklid, and the supercar’s speed-sensitive automatic rear spoiler will find a new home here as well. Additional aerodynamics will be introduced by way of a hood scoop which eschews its traditional role in the realm of engine induction and instead will be used to channel air through the underbody of the car to help bolster downforce.
It’s clear that the Lexus RC F has its sights aimed squarely at the recently-announced BMW M4. While we’ll have to wait for the car’s official announcement to get all the performance details, it would appear that the Lexus will have both a horsepower advantage as well as the added flexibility of an extra gear in comparison to the BMW’s seven-speed DCT. However, a similar case unfolded when the E92 BMW M3 and the Lexus IS F went toe to toe a few years ago, and the Barvians took that trophy home without much fuss. We look forward to seeing how things shake out this time around.
The Lexus RC F will be officially unveiled later this month at the North American International Auto Show in Detroit, with an expected MSRP just north of $100,000 and a production date expected to be toward the end of 2014. Check out the (very) brief press release below for more details.
Lexus RC F Redefines the Daily Commute with Asphalt-Grinding Performance and Bold Head-Turning Design

TORRANCE, Calif. – Jan. 8, 2014 – Giving new meaning to "back to the grind," the daily
commute is now transformed in to a day at the track with the all-new Lexus RC F. The RC F coupe
is styled with fins, ducts and scoops to support the most power V8 performance car ever
developed by Lexus.

Based on the spectacular all-new RC coupe that was revealed at the Tokyo Motor Show
last November, the RC F has wider wheels and tires, an active rear wing, air scoops, cooling ducts
and carbon fiber components, each delivering uncompromising grit to the driving experience.

Design Exterior
The signature Lexus spindle grille, featuring a single F-pattern, dominates the front of the
RC F from the bottom of the hood to the lower lip. The hood is higher than that of the RC to
accommodate the larger V8 engine and create the powerful flared profile suited to an F model.
Ducts beneath the front bumper, fenders, and strategically-placed aerodynamic stabilizing fins
create a stance which further identifies the F model.

Air outlets at the rear of the front fender form the shape of an L when they merge with side
sill extensions, while stacked trapezoidal quad-outlet tailpipes at the rear add further aggression.
Taking design cues from the Lexus LFA supercar, the RC F features a speed-sensitive active rear
spoiler. It enhances the coupe’s lines at standstill and deploys from the RC F’s deck at approximately 50 mph and retracts when the speed is less than 25 mph. The wing helps the RC F
maintain traction and stability at higher speeds.

Three variations of 10-spoke 19-inch forged aluminum wheels are available, including two
machine polished designs and one design hand polished by a craftsman.

Design Interior
The striking cockpit-like interior of Lexus RC F complements the aggressive exterior.
Unique components include the meters, steering wheel, seats, ornamentation and pedals. The
instrument panel is dominated by a central meter which changes according to the four selectable
driving modes. The information, color of the display and size of text can be changed.

Occupant comfort is all important. RC F debuts a Lexus-first elliptical cross-section thickgrip
steering wheel with optimum placement of paddle gear shifts. All-new high back seats with an
embossed F on the headrests offer the driver and passenger an exceptional performance fit. The
seats are available in a selection of five leather trims, each with contrasting stitching.
Outstanding new L-shaped rubber slits in the brake and accelerator pedals combine form
and function.

The all-new RC F will be revealed at a press conference at the 2014 North American
International Motor Show in W-152, formerly known as the Riverview Ballroom, at Cobo Center
Jan. 14 at 8:45 am EST. The Lexus press conference will also be streamed live online at
www.lexus-int.com/. Follow the hashtag #AsphaltUp for more developments.
Tags:
BMWISLexusM3M4RCRC F