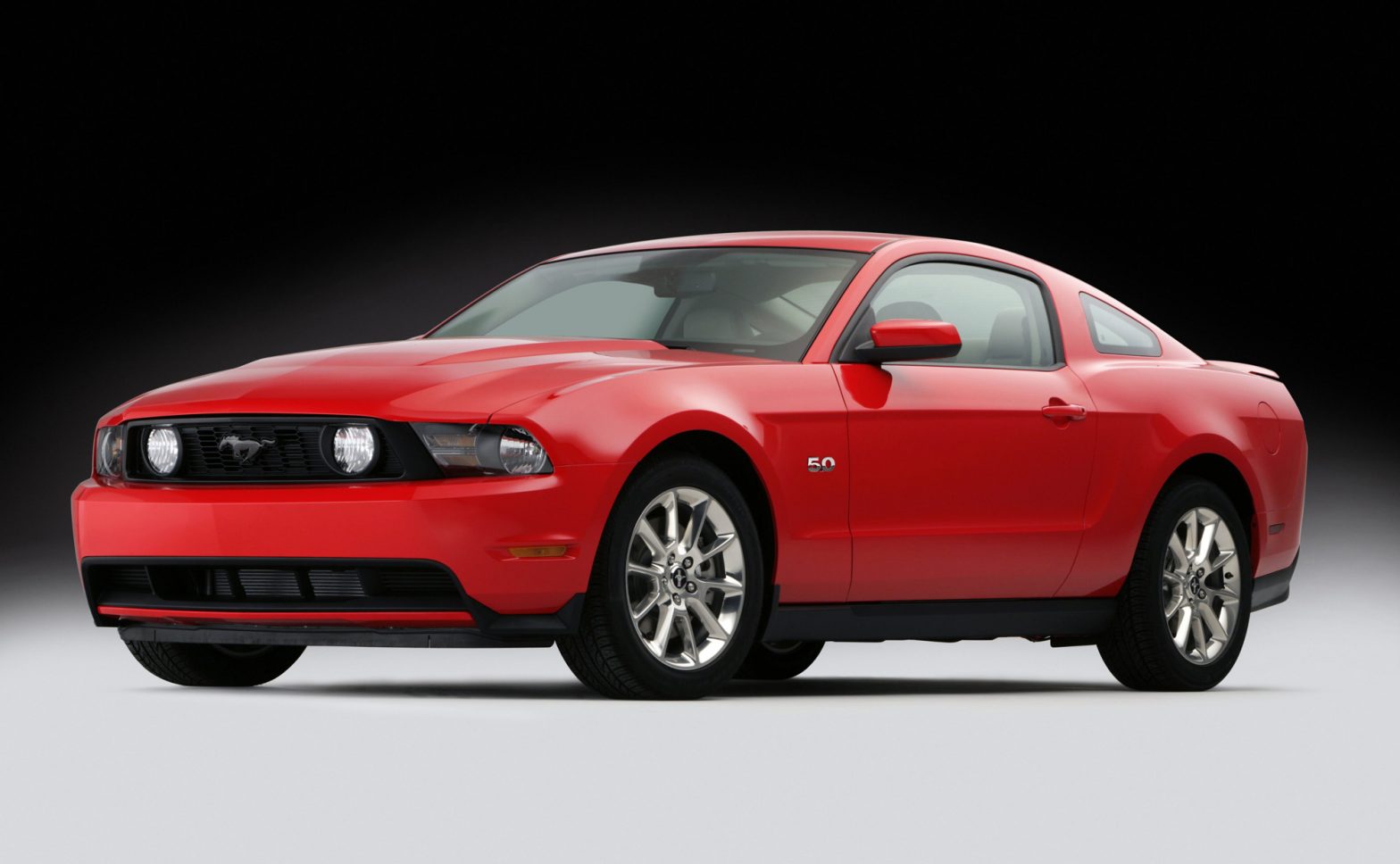 The muscle car wars never seem to end, do they? Ford gave the Mustang an all-new look for 2010 with a high-grade interior and signature Pony Car design, Dodge’s retro-pretty Challenger hit the streets, and the Chevrolet Camaro brought direct injection and stellar driving dynamics to the table. The Mustang GT has always been one of our favorite sports cars, and there’s more to love for the 2011 model year — the Mustang GT gets an all-new 5.0-liter V-8 engine, producing 412 horsepower and 390 pound-feet of torque.

But the story about the 2011 Mustang GT isn’t just power, it’s also fuel economy. The use of twin independent variable camshaft timing (Ti-VCT) and a new aluminum four-valve setup means the ‘Stang can now achieve up to 25 miles per gallon on the highway. Better suspension geometry and the use of EPAS (Electronic Power Assist Steering) aid in fuel saving, as well.

For the full details, scroll down to read Ford’s press release. Be sure to click through our gallery of images, as well.

DEARBORN, Mich., Dec. 28, 2009 – The 5.0 is back! The 2011 Ford Mustang GT arrives with an all-new advanced 5.0-liter V-8 engine, developed by a passionate cadre of enthusiastic engineers who rallied around the common goal of delivering more than 400 horsepower.

The modern 5.0-liter four-valve Twin Independent Variable Camshaft Timing (Ti-VCT) V-8 engine in the new Mustang GT will deliver 412 horsepower and 390 ft.-lb. of torque. At the same time, fuel economy is projected to be better than the previous model and unsurpassed in the segment.

“This all-new 5.0-liter engine is the next chapter in the development of the world-class Mustang powertrain portfolio,” said Derrick Kuzak, group vice president, Global Product Development. “It’s a thoroughly modern engine for the times, delivering the performance and fun-to-drive factor that enthusiasts want, while improving fuel economy.”

Coyote in the lobby

Many of the engineers on the development team have worked in the Engine and Electrical Engineering Building on the Dearborn, Mich., product development center campus. For years they walked past the original 5.0-liter V-8 Coyote Indy racing engine on display in the lobby, continually inspired by its mix of heritage, high technology and horsepower.

The powertrain development community had long wanted to develop a new 5.0-liter powertrain, with strategic discussions beginning in 2000. By 2007, the Mustang competitive landscape was beginning to change, a sign that the time was right for advancing the Mustang GT powertrain to world-class levels.

The team began 5.0-liter engine development with the objective of delivering 400-plus horsepower, on a timetable accelerated by 12 months without compromises in reliability, durability, fuel economy, or noise, vibration and harshness (NVH) control.

“Nearly all of the team members have worked on other high-profile powertrain programs,” said V-8 Engine Programs Manager Mike Harrison. “They all had a clear vision of the work required on their particular component or subsystem. Their passion for engines, racing and delivering every last ounce of performance throughout the engine speed range really demonstrated that they put their heads and their hearts into this powertrain.”

The result of this development is an “and” solution, not an “or.” 2011 Mustang buyers will enjoy the benefits of a powerful engine as well as responsible fuel economy.

A critical element in the 5.0-liter V-8’s ability to deliver 412 horsepower, with improved drivability, tractability and fuel economy over the 2010 Mustang GT powertrain, is enhanced Ti-VCT.

During the development phase, camshaft lift profile and port optimization started with higher-lift Ford Racing aftermarket units, modified for compatibility with various four-valve-per-cylinder heads. Extensive CAE and dynamometer testing was performed to fine-tune camshaft events and port flow for performance and fuel efficiency in conjunction with the variable camshaft timing.

The aluminum block was developed for optimized windage and oil drainback under lateral conditions and high rpm, such as a track-day outing for an enthusiastic owner and driver. Increased main bearing bulkhead widths and nodular iron cross-bolted main bearing caps with upsized bolts were also employed to accommodate the significant performance increase.

An additional element is the increased capacity and baffling of the deep-sump stamped steel oil pan to enable sustained high-rpm use and offer the convenience of 10,000-mile oil change intervals. Piston-cooling jets also were incorporated for performance-minded customers and for faster oil warm-up on cold start.

The 412 horsepower and 390 ft.-lb. of torque delivered by the 2011 Mustang GT 5.0-liter V-8 represent significant increases versus the 2010 model year output levels.

2011 Mustang GT fuel economy is enabled by the Ti-VCT, the six-speed transmissions in automatic or manual variations, EPAS and an additional rear decklid seal to enhance aerodynamics.

Fuel economy also is aided by engineering a lightweight powertrain. The engine, as shipped, weighs just 430 pounds. This represents a weight savings of more than 20 percent versus the previous 5.0-liter offering. Lower mass can be attributed to the aluminum block and heads, the lightweight composite intake manifold, composite cam covers and hollow camshafts.

From the 5.0 fender badges to the new engine cover, Mustang GT honors and continues the proud heritage of its predecessors. The speedometer increases to 160 mph and the tachometer redline advances from 6,500 to 7,000 rpm.

For 2011, Mustang GT benefits from across-the-board NVH improvements. These include additional sound-deadening material on either side of the instrument panel, an additional seal between door and rocker panel to reduce wind noise and a real wheel arch liner to reduce noise on gravel or wet surfaces.

Mustang GT convertible models feature enhanced structural rigidity, with lateral stiffness improved by 12 percent versus the 2010 model. A tower-to-tower front strut brace is now standard, and the V-brace has been stiffened by adding gussets. The secondary crossmember also has been stiffened while a front Z-brace has been added, connecting primary and secondary crossmembers. A-pillar stiffening foam also has been added to increase rigidity.

“This powertrain honors Mustang’s heritage by raising the bar on performance while increasing fuel economy,” said Barb Samardzich, vice president, Powertrain Development. “For enthusiasts, such as the passionate members of the 5.0-liter V-8 team, it’s like having your cake and eating it, too.”