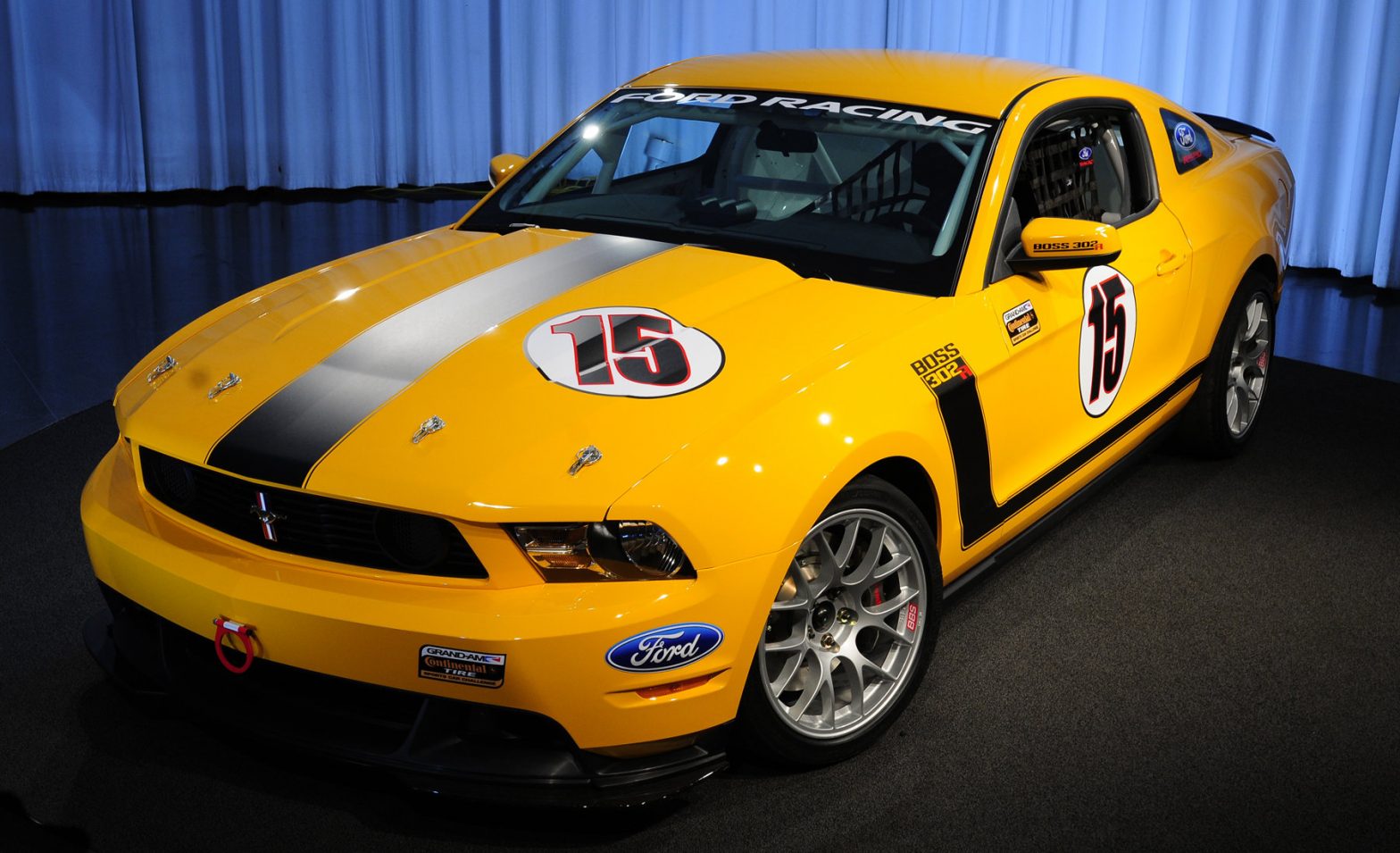 Today, Ford Racing unveiled the all-new Boss 302R based on the 2011 Mustang GT. The 302R is a factory-built, race-ready machine poised to compete in Grand-Am, SCCA, and NASA classes, as well as individual track days.

The price of all this new Mustang hotness? $79,000. Only fifty 302Rs will be sold through Ford dealers, with the first deliveries expected to take place in the third quarter of 2010.

In honor of the 40th anniversary of Parnelli Jones’ 1970 Trans-Am championship in a Mustang BOSS 302 prepared by Bud Moore Engineering, Ford Racing is introducing the BOSS 302R, a factory-built race car ready for track days and road racing in a number of Grand-Am, SCCA and NASA classes.

“To keep pace with consumer demand, the Ford team has built modern versions of the most iconic performance Mustangs over the years,” said Jamie Allison, director, Ford North America Motorsports. “From Shelbys to Bullitt, Mach and Cobra Jet, it is now time for BOSS to join the list of America’s most coveted Mustangs. The original BOSS 302 was a championship-winning legend and the new Mustang BOSS 302R will carry on the tradition. The Mustang was born to race from the start, and this new Mustang is bred to win.”

The Mustang BOSS 302R is a serialized off-road-only vehicle ready to race. Each base model will come with a 5.0-liter four-valve engine and a six-speed manual transmission with a roll cage, race seats, safety harness, data acquisition and race dampers/springs, and a Brembo brake and tire package, starting at an MSRP of $79,000.

And, with a special Grand-Am Homologation Package (M-FR500-BOSS R1), it will also be ready to compete in the Grand-Am Continental Tire Sports Car Challenge series (formerly known as KONI Challenge), starting with the season-opening race in Daytona on Jan. 29, 2010. As of today, five BOSS 302R race cars will be delivered to customers ready to race in Daytona. MSRP of the BOSS 302R1 is $129,000.

The BOSS 302R follows in the very successful footsteps of its most recent road racing predecessor – the Mustang FR500C from Ford Racing. In 2005, when the Mustang FR500C debuted at Daytona, the first car was delivered on Wednesday of that week and won the KONI Challenge race on Friday.

In five years of competition since then, the Mustang FR500C has won three Triple Crown championships of driver, team and manufacturer’s titles in KONI competition including back-to-back (2008 and 2009). The FR500C has also seen success in FIA GT4 competition winning the 2007 and 2008 driver’s championships.

“We expect the BOSS 302R to continue the successful tradition of winning with factory-built production-based race cars from Ford Racing,” said Allison. “The FR500C and FR500S road racing Mustangs, and the Mustang FR500CJ (Cobra Jet) for drag racing have proven to be great cars for our customers, helping teams win races and championships. We believe that the BOSS 302R will provide that same sort of competitive product for our customers with the tradition you can only get from Ford Racing.”

“Racing has long served as a technical proving grounds for production engines,” said Allison. “What’s good enough for the streets is now good enough for the racetrack. The 5.0-liter block and architecture in the Mustang BOSS 302R is the same as the 2011 Mustang GT.”

“We have a great team on the BOSS 302R project,” said Andy Slankard, Ford Racing engineering supervisor and the lead engineer on the BOSS 302R project. “Between our partners at AutoAlliance International, where the Mustang is built, Team Mustang, Multimatic and the entire Ford Racing team, we have once again proven to be a leader in turnkey production-based race cars.”

Available through Ford dealers, a total of 50 BOSS 302R Mustangs will be built by Ford Racing. Delivery is anticipated in the third quarter of 2010.