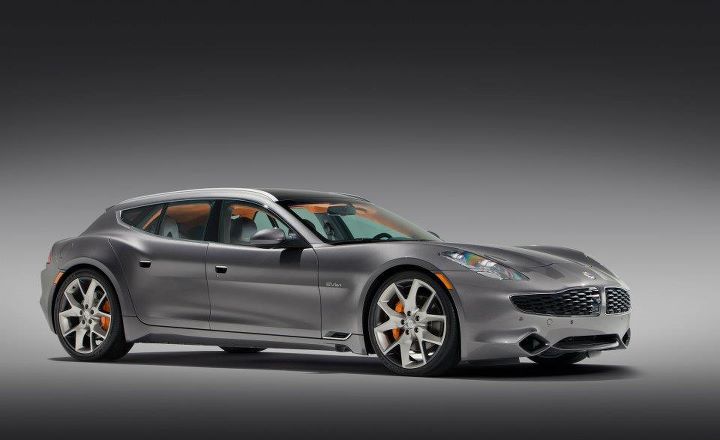 After teasing us about an upcoming debut at the Frankfurt Motor Show, Fisker has unveiled the five-door Surf range-extended electric vehicle.
As Fisker plans to expand its lineup based on the Karma platform, it is calling the Surf a “crossover between a sports car and a station wagon.
While Fisker isn’t giving up a lot of details about the new Surf yet, its not unlikely that it will use the same powertrain as the Karma, which currently produces 403 horsepower, and a whopping 981 pound-feet of torque from zero rpm. No matter how much componentry carries over to the Surf, we know that it will be an electric vehicle with a small gasoline engine supplying extra energy to the battery for extended range.
We’ll keep you posted as more details emerge between now and its production date.
Scroll down for the press release from Fisker.
FISKER AUTOMOTIVE NEWS AT THE FRANKFURT AUTOSHOW
Frankfurt, Germany – September 13, 2011: Taking center stage at Fisker Automotive’s Frankfurt Show stand is a stunning new version of the Fisker Karma—the Fisker Surf—a new model that delivers on Fisker’s promise of Pure Driving Passion and Uncompromised Responsible Luxury. But that’s not the only news from the environmentally responsible American Car Company:
FISKER SURF
The new Fisker Surf is the world’s first electric luxury/sports automobile for an active and eco-friendly lifestyle. The Fisker Surf builds on the success of the ground-breaking Karma Electric Vehicle with extended range (EVer™) by adding additional, flexible load-carrying capability, along with a spirited new attitude all its own. Fisker Surf combines performance, luxury, style, utility, and economy with an enduring concern for the sustainable use of resources and respect for our natural environment. As a global company Fisker Automotive will offer the Surf in all its markets around the world for the 2013 model year. The Surf is Fisker’s vision of a crossover between a sport car and a station wagon and shows how Fisker is expanding its Karma platform rapidly with additional models that again create a new market niche.
“The Surf is a first-of-its-kind eco-friendly lifestyle vehicle that offers space, performance and luxury design for people who live an active, environmentally conscious lifestyle and like to drive beautiful cars,” Henrik Fisker, CEO/Executive Design Director, Fisker Automotive.
NEW SUPPLIER
Fisker Automotive recently announced the signing of an agreement with BMW that will cover the supply of engines and other components for future Fisker models. BMW will supply a four-cylinder turbocharged engine for the next generation of Fisker cars, code-named ‘Project Nina’, which are scheduled to go into production in the re-commissioned former GM plant in Wilmington, Delaware at the end of 2012 and be on sale globally in 2013. The first ‘Project Nina’ derivative will be a mid-size premium sedan utilizing Fisker’s EVer™ technology to deliver on Fisker’s corporate vision of Uncompromised Responsible Luxury.
Henrik Fisker, comments; “The BMW engine was an obvious choice for us, as BMW is known for producing the best and most fuel efficient gasoline engines in the world. We are very pleased to have signed this agreement with BMW."
CEC VEHICLE
Fisker Automotive is proud to announce its RESERVE customizable options program. This exclusive Fisker authorized accessory program will be available through Fisker retailers. The first display car from the program, created in collaboration with Claus Ettensberger Corporation (CEC), offers a variety of aerodynamic components and two wheel options (forged and monoblock) for the Karma with many new exciting products in development.
FISKER KARMA
The Fisker Karma Sedan, Fisker Automotive’s first production car, is a luxury electric vehicle with extended range (EVer), representing the company’s firm belief that environmentally conscious cars need not sacrifice passion, style, or performance. The Fisker Karma has a total of 403 HP with a torque of 981lb./ft. (1300 Nm) at zero rpm. With a total range of 300 miles (483 km), 50 miles in its pure electric mode and 250 miles with the anxiety-free range-extender. The Fisker Karma can also achieve up to 100 mpg (2.4 L/100 km) with just 83g CO₂/km on an annual basis. In sport mode, the top speed of the Fisker Karma is 125 mph and with a 0-60 mph time of 5.9 seconds. Prices start at €85.500 – €98.900 Euros/ $95,900 – $108,900 USD.
ABOUT FISKER AUTOMOTIVE, INC.
Fisker Automotive is an American car company, founded in 2007, committed to producing electric vehicles with extended range (EVer) that deliver Uncompromised Responsible Luxury™. The Fisker Karma Sedan is the world’s first premium electric plug-in hybrid representing the company’s firm belief that environmentally conscious cars need not sacrifice passion, style, or performance. Fisker Automotive is a global company that is redefining luxury for the modern sports car buyer. For more information on the brand and the Fisker Karma sedan, please go to http://fiskerautomotive.com.
###
Tags:
BMWHenrik Fiskerkarma