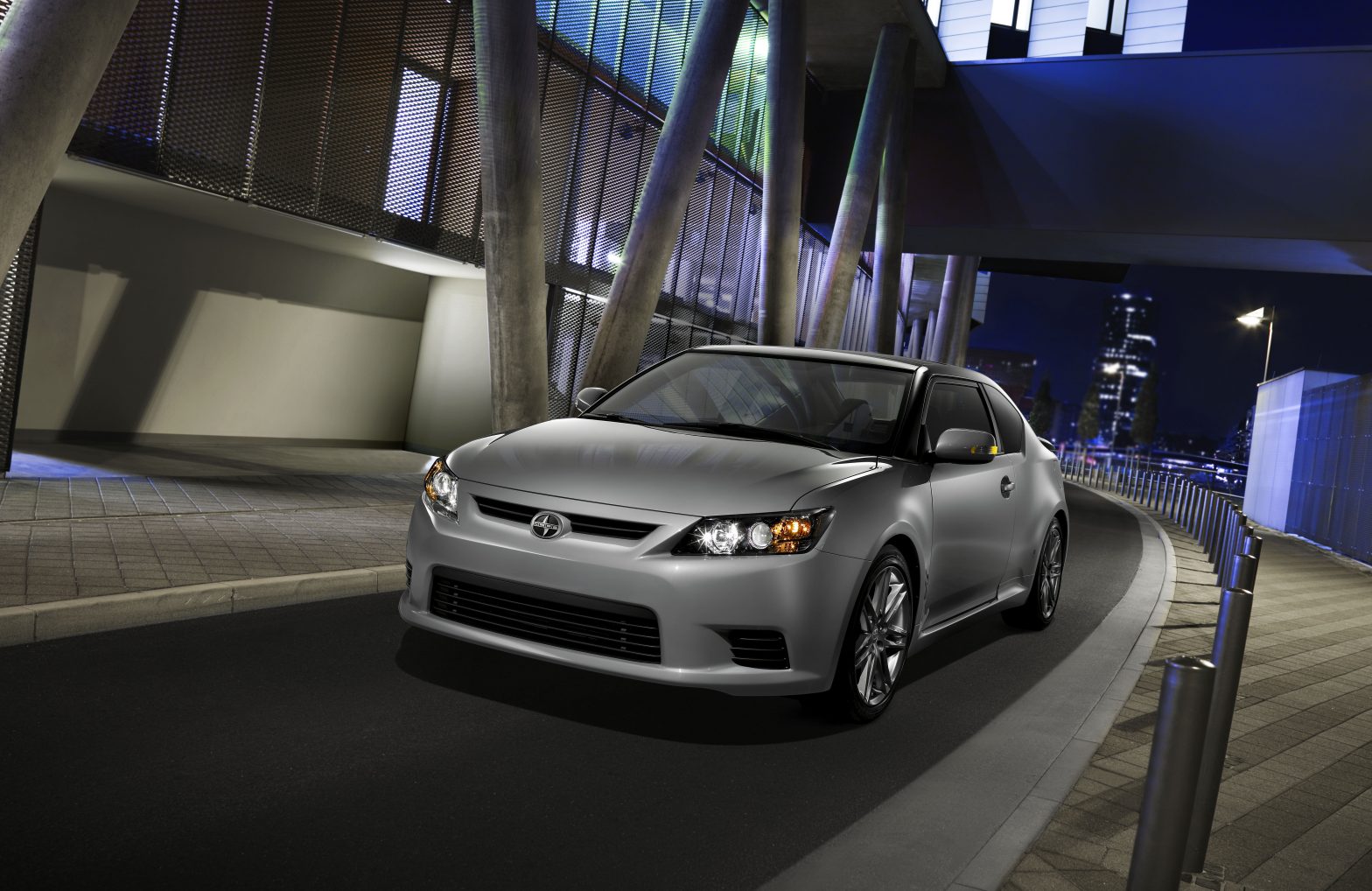 The 2011 Scion tC has just been unveiled, and its new bodywork draws a healthy amount of inspiration from last year’s FT-86 concept car. With the exception of a less aggressive windshield angle, the greenhouse on the tC is almost a carbon copy of what we saw on the FT-86. The front and rear of the tC also draws inspiration from the concept car. All in all, this is a handsome refresh of an already good looking car.

Mechanically, the tC receives a slight bump in displacement, moving from a 2.4-liter I-4, to a 2.5 liter. That corresponds to a 19 horsepower increase. To harness the additional power, the tC can be had with either a new six-speed manual or automatic, as opposed to the five-speed manual and four-speed auto in the 2010 model.

Scroll down for the full press release from Scion.

NEW YORK (March 31, 2010) – A New Dimension of Scion was unveiled today with two new production vehicles – the all-new 2011 iQ premium micro-subcompact and the second-generation 2011 tC sports coupe – at the New York International Auto Show. The tC is scheduled to arrive in dealerships later this fall, while the iQ will go on sale in early 2011.

“Scion prides itself on being an innovative brand with a lineup of iconic vehicles that set automotive trends,” said Jack Hollis, vice president of Scion. “The iQ will define the premium micro-subcompact segment as the choice for new urbanites who want clever transportation without a sacrifice in style or new features.”

“The all-new tC features styling that is both refined and aggressive, appealing to a sports coupe owner who wants to make a bold statement. The tC has had the youngest median age buyer in the industry, and with more power, superior driving dynamics, and increased fuel efficiency, that should remain the case with the new tC as well.”

Enhanced performance is accomplished in the second-generation tC with an all-new 2.5-liter inline four-cylinder engine with dual VVT-i that generates 180 horsepower, 19 more than the previous model, and 11 additional lbs.-ft of torque. In addition to increases in power, the new engine delivers an increase in fuel economy all while lowering emissions. Performance is further improved and heard through a new intake manifold design and a sport-tuned exhaust system that delivers a bold and aggressive sound.

The tC features two all-new transmissions: the six-speed manual transmission has improved shift-feel and adds to the car’s already fun-to-drive character, and a new six-speed automatic gains two gears along with sequential-shift.

The 2011 tC enters its second-generation riding on a new platform, including a specially tuned MacPherson strut front-suspension and a double-wishbone rear-suspension that rides lower than the previous model. Larger 18-inch aluminum-alloy wheels are wrapped in wider tires, giving the tC a broader stance and elevated handling characteristics. The new model also comes standard with larger 16-inch disc brakes on all corners. A new performance-tuned electronic power-steering system provides the driver a confident feel that is more in-tune with the road. The elements brought together in the new chassis result in a premium performance that expands the tC into a new dimension of driving enjoyment.

The all-new design of the 2011 tC projects a bolder and more aggressive stance. Important design cues like the helmet-inspired cabin shape were adopted from the Calty-designed Scion FUSE concept, which was unveiled at the 2006 New York Auto Show. The protruding fender flares amplify its wider, lower stance and are aggressively complemented by a sleek front grille and projector headlamps. The shape of the rear taillights flow cleanly into the overall shape of the trunk.

Inside, a driver-focused cockpit starts with a sporty new three-spoke steering wheel that features a flat bottom and a new shape that offers a confident grip. Front seats feature robust bolsters that provide secure positioning while still offering spaciousness and comfort. The instrument-panel, gauge cluster and center-console all face inward in a V-shape, making controls easily accessible.

Overall, the cabin has been lengthened for a more comfortable passenger experience with increased versatility. Utility is enhanced with reclining rear seats that split 60/40, providing more storage capacity. The panoramic moonroof remains standard in the new tC.

The new tC comes standard with an AM/FM/CD/USB audio system that features eight speakers. As with all Scion models, steering-wheel-mounted controls allow the driver to easily navigate through all of their music.