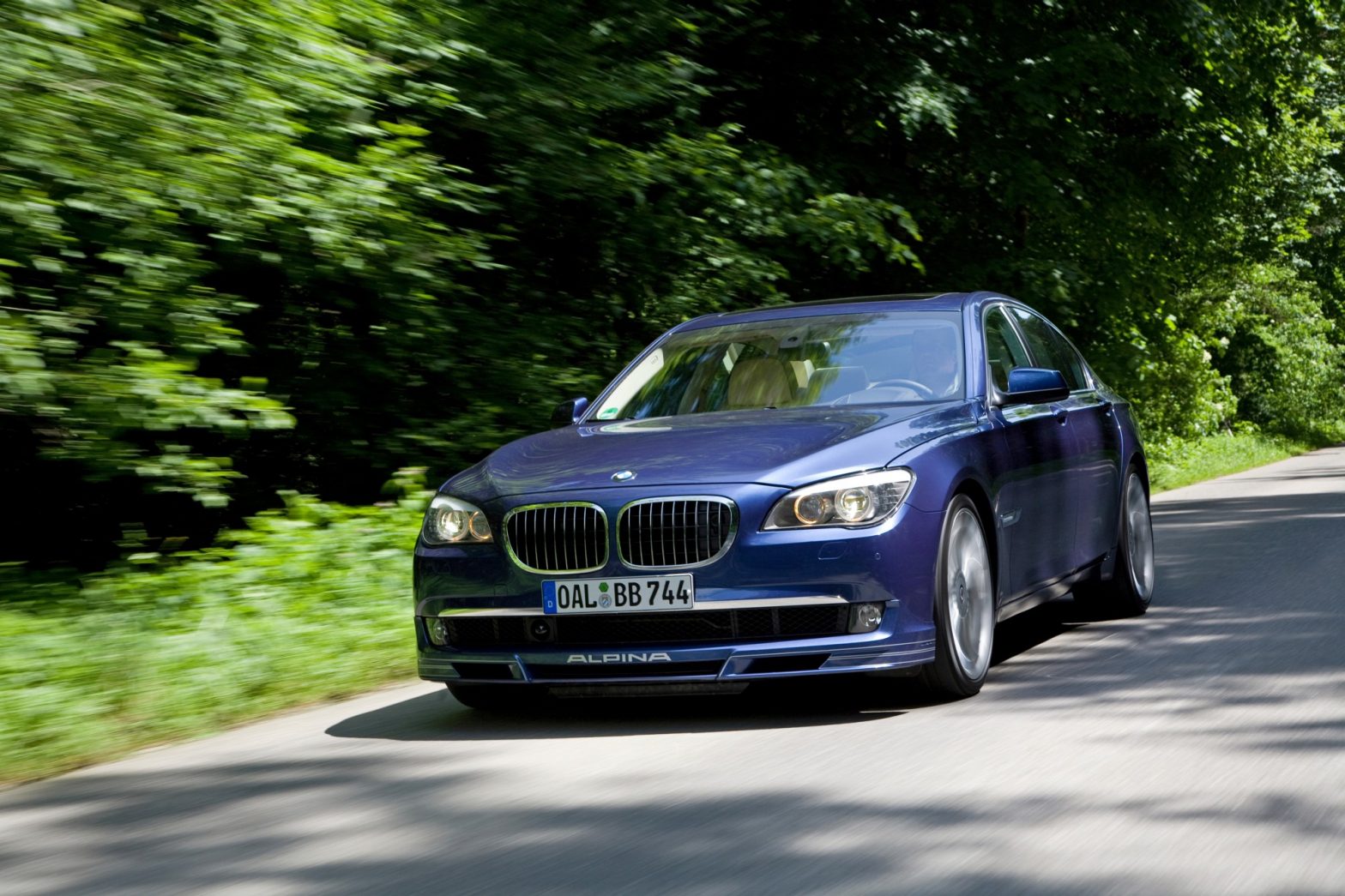 We could write long lines of flowery text to explain why, in its last generation, we liked the big daddy Alpina B7, but it’s so much easier to just sum it all up with one word: Awesome. And while our love for that car hasn’t faded away, we’re now doubly excited about the announcement from BMW North America today, saying that an all-new B7 is slated to go on sale this Spring.

The Alpina package starts with a reworked version of the 750i’s well-liked 4.4-liter, twin-turbocharged V-8. Power has been increased to 500 horsepower and 516 pound-feet of torque (gains of 100 and 66, respectively), and runs to 60 miles per hour will happen in a mere 4.5 seconds. That’s fast, especially for a 7-Series.

From there, BMW has tuned the dynamic damping control and active roll stabilization to better handle the increased power, while still providing a sporty, yet refined ride quality. The overall goal with the B7 is to make it an extremely agile, yet confident performance sedan. Don’t worry — those hot twenty-spoke wheels are still in place, measuring twenty-one inches in diameter for the 2011 model.

Overall, the new Alpina B7 looks fantastic, and we’re sure it’ll be nothing short of excellent to drive. The awesomeness of the last-generation car remains intact, just wrapped in a prettier package. Look for this car to make its North American debut at the Chicago Auto Show next month.

Woodcliff Lake, NJ – January 8, 2010…  BMW of North America announced today that the 2011 BMW ALPINA B7 sedan will join BMW’s North American product range as the most dynamic 7 Series model.  The BMW ALPINA B7 represents the second generation of ALPINA automobiles based on the BMW 7 Series to be offered in the US. The first BMW ALPINA B7 was offered as a limited edition for the 2007 and 2008 model years. Newly interpreted and based on the current BMW 7 Series platform, the B7 will again set the benchmark in terms of performance, refinement, technology, luxury and exclusivity.

Yielding exquisite levels of power and torque from the twin-turbocharged 4.4 liter V8, and in conjunction with the electronically-adjustable suspension with active roll stabilization, the new B7 promises to offer a spectrum of driving experiences so broad as to be unheard of in this class of automobiles. The evolution of the traditional 20-spoke 21” ALPINA CLASSIC wheels underline the fresh design language found throughout the B7 and impart it a distinctive appearance and powerful stance.

Both short- and long-wheelbase models will be offered. The BMW ALPINA B7 will make its North American premiere at the 2010 Chicago Auto Show in February, and go on sale at authorized BMW Centers in Spring of 2010. Pricing will be announced closer to the on-sale date.

ALPINA and BMW. A history of synergy.

The two companies, both at home in the German state of Bavaria, have a long history of working together to produce special BMW automobiles. Burkard Bovensiepen, son of the founder of ALPINA Business Machines and an enthusastic racing driver/engineer, began his automotive career path in 1961 by developing a dual-carburetor setup for the just-introduced BMW 1500 sedan. It was a predictive beginning: to take an already fine-performing BMW (which also just happened to be a practical sedan) and making it perform even better.

By 1964, BMW had officially recognized ALPINA’s contribution to BMW performance. Not long thereafter, Burkard Bovensiepen founded the ALPINA company – ALPINA Burkard Bovensiepen KG – that continues today, creating special versions of BMW automobiles that offer a particular brand of performance for discriminating auto enthusiasts. Yet outside the circle of dedicated BMW enthusiasts, ALPINA has kept a low profile in North America. In addition to racing versions of BMWs, ALPINA has developed a progression of BMW-based cars based on 3, 5, 6, 8, Z4 and Z8 models and offered them on a limited-production basis. ALPINA is located in the small Bavarian city of Buchloe, some 50 miles southwest of Munich, BMW’s headquarters city and the capital of Bavaria.

The B7 is the newest manifestation of the unique BMW-ALPINA synergy – once again based on the BMW 7 Series luxury sedan. Currently, BMW offers ultra-performance models of its 3, 5, 6, X5 and X6 Series developed by BMW M, BMW’s own performance subsidiary. For an ultra-performance version of the 7 Series – a vehicle defined by luxury and generous interior space – something other than “M” performance character was called for.

In recent models, ALPINA has concentrated on delivering very high levels of performance with moderate rpm ranges and automatic transmission. Most appropriately, the new BMW ALPINA B7 applies this philosophy to the newest 7 Series to produce a luxury sedan of stunning performance. “A 7 Series Beyond,” one might say.

The B7 sedan is equipped with BMW’s twin-turbocharged 4.4 liter, all-aluminum, High Precision Direct Injection V-8 engine which has been enhanced by ALPINA and is capable of producing 500 (373kW) horsepower and 516 lb-ft (700Nm) of torque.  This rear-wheel drive performance/luxury Sedan achieves 0-60 mph in 4.5 sec.  With maximum torque available across an unusually broad engine range, from 3,000 to 4,750 rpm, the B7 accelerates effortlessly from virtually any speed.

The two turbochargers operate in parallel, with generously-dimensioned turbine vanes measuring 44mm in diameter. Thorough exploitation of the engine’s potential was achieved by means of optimizing the indirect intercooler (air-water/water-air) with its short intake paths and flow-optimized intercooler tracts. All three intercoolers, the low-temperature intercooler integrated into the radiator package, as well as the two near-engine intercoolers are enlarged by approximately 35%, ensuring very high thermodynamic efficiency. High-performance pistons have been specified to withstand the thermodynamic forces created by a 9.2:1 compression and a maximum turbo boost of 1.0 bar. The result is a formidable specific output of 115hp (85kW) per liter, with a maximum average compression of 20.1 bar, a benchmark even amongst established sports cars.

This wide power band coupled with the six-speed sport automatic transmission gives the driver remarkably high levels of power and capability in every driving situation. The ALPINA SWITCH-TRONIC transmission control offers tailored shift characteristics for every driver and situation thanks to its Sport and Manual modes. To manually select the gears of the automatic transmission, the driver may use buttons found on the back of the ALPINA-tailored steering wheel. This results in shifts which take place in a few hundred milliseconds with minimal power interruption.

Ending in two polished double-tailpipes, the stainless-steel ALPINA exhaust system offers up that deep and sonorous yet not intrusive V8 sound that enthusiasts have come to expect from ALPINA.

The BMW ALPINA B7 builds on the state-of-the-art adaptive suspension technologies of the 7 Series, including tuned Dynamic Damping Control and Active Roll Stabilization, to the demanding requirements of a high performance sedan. Long gone are the days when a purely “hard and sporty” ride was a sought-after attribute of suspension set-ups. Striving for truly neutral handling continues to be the goal, yielding the best of what is technologically feasible. In pursuit of this goal, shorter and uniquely calibrated springs reduce front and rear ride height by 15mm and 10mm respectively. Dynamic Damping Control and Active Roll Stabilization enable the driver to select from three distinct suspension set-ups: Comfort, Normal and Sport. These are intentionally calibrated to provide noticeably different set-ups, influencing the characteristic of the dampers, the Active Roll Stabilization as well as the parameters of the power steering assist, throttle response algorithms and load-reversal damping.  The Sport-Plus mode automatically shifts the Dynamic Stability Control system into Dynamic Traction Control (DTC). This allows noticeably more slip at the driven wheels and delayed intervention by the traction control system.

Together with the 21” wheel and tire combination, the suspension is at once sensitive to inputs and direct in its feel, yet free from the harshness of a purely sports-oriented suspension. The light-weight 21” wheels, with their new interpretation of the ALPINA CLASSIC wheel design, are shod with a specially selected staggered MICHELIN PS2 tire set-up: 245/35 R21 front and 285/30 R21 rear.

The B7 sedan is finished with ALPINA aerodynamic developments, including front and rear spoilers which not only enhance the appearance but also improve stability and performance at high speeds.  In true “form-follows-function” fashion, the ALPINA front integrates the fresh-air requirements of the transmission and engine oil coolers, which are separated out of the main cooler module for improved efficiency. The spoilers reduce lift at the front by 30% and rear by15%. The exhaust system’s two double tailpipes are seamlessly integrated into the rear bumper. The newest evolution of the traditional 20-spoke ALPINA CLASSIC wheels gives the B7 a distinctive appearance and powerful stance.

The interior of the B7 sedan features ALPINA blue illuminated door sill trims, the SWITCH-TRONIC steering wheel in hand-stitched LAVALINA leather, and the Black-Panel LCD screen instrument cluster branded with ALPINA. Exclusive interior luxury wood trim in the form of Myrtle Burl, a knotted burl of the Laurel only found on the Pacific Coast of the United States, provides a warm and traditional ambience. Optional ALPINA Piano Lacquer interior trim with its silver diagonal rhombs, offers a modern alternative. The full complement of BMW 7 Series exterior colors remains available, in addition to the signature ALPINA Blue metallic paint.

Discreet metal ALPINA emblems adorn the upper seatbacks of the standard leather Comfort seats and are inlayed in the wood trim. An additional ALPINA plaque indentifying the car is mounted on the inner roof panel just ahead of the sunroof. Even the engine bay carries a subtle signature by tidily presenting itself with a newly-designed ALPINA engine cover.