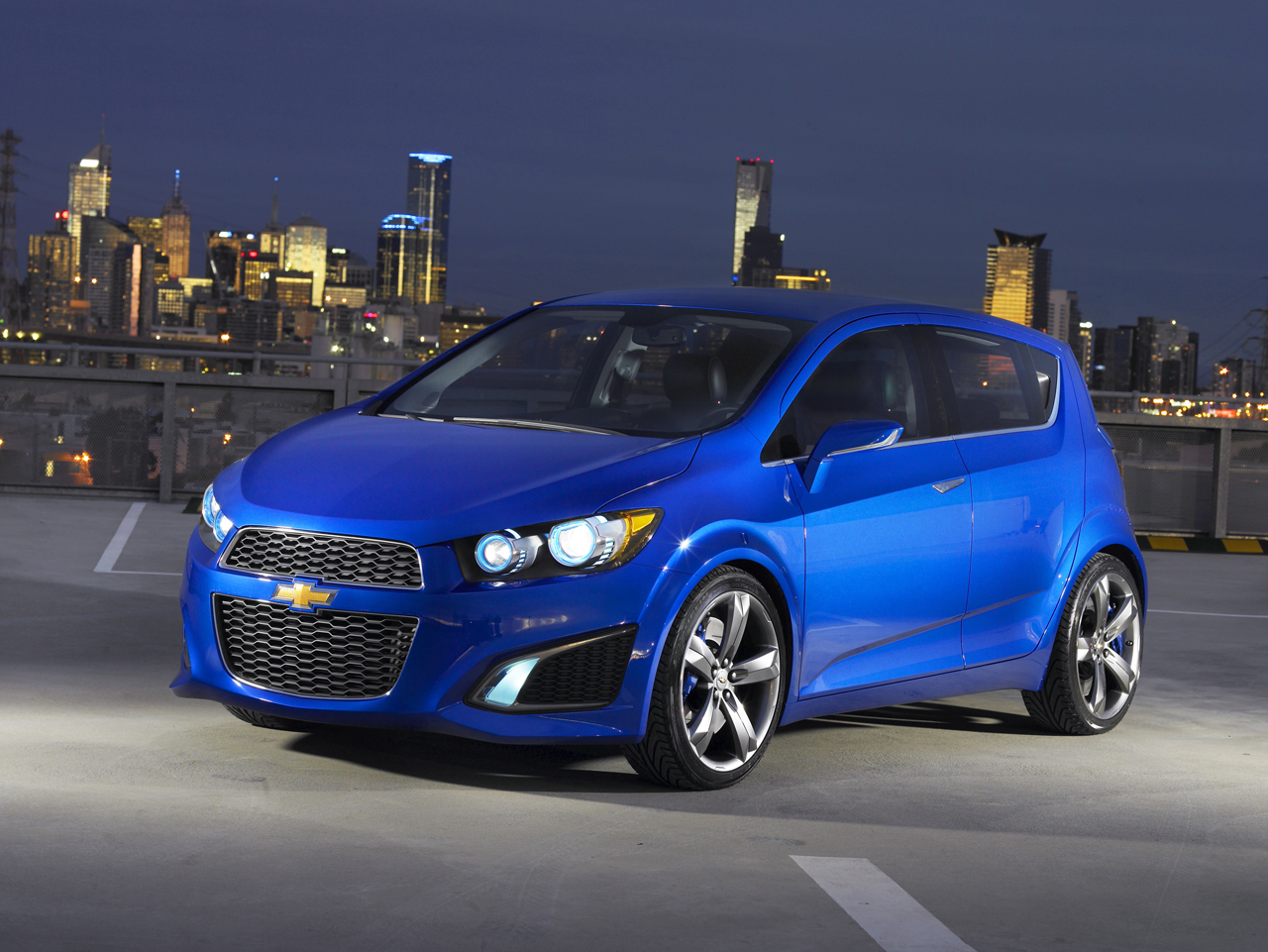 We have a confession to make: In its current form, the Chevrolet Aveo has been the butt of many a joke within the automotive industry. It isn’t nearly as good as anything else in the class, and in a time when more focus is being put on B- and C-segment cars, General Motors really disappointed with its smallest offering. But a new version is on the horizon. And judging by the preliminary information about the Aveo RS show car (which will appear next week at the Detroit Auto Show), drastic changes are in the works.

It seems odd to use the words "hot" and "Aveo" simultaneously, but just look at this little thing — it’s pretty stunning. It’s obvious that the Chevrolet Spark has influenced the overall design of the larger Aveo, but that isn’t necessarily a bad thing. The new exterior is significantly more bold and sporty than the current model, though you can expect things to be softened up a bit for the non-RS models.

The RS show car is powered by GM’s turbocharged, 1.4-liter Ecotec four-pot engine, producing 138 horsepower. This powerplant is initially slated to appear in the Chevrolet Cruze later this year, and we’d expect it to be a potent little mill in the diminutive Aveo, especially when mated to a proper six-speed manual transmission.

Inside, the Aveo RS’s interior is full of GM’s latest styling cues, including an all-new instrument cluster design featuring a digital speedometer and gauge readout. Our big question will be in overall interior quality — a place where the current Aveo really fails. It has the same sort of Euro feel as the new Ford Fiesta, which will be the Aveo’s main competitor.

We really like the idea of an Aveo RS miniature hot hatch, and we hope the Ford Fiesta and Honda Fit get similar treatments in the future. (Comparison test, anyone?) And while the production Aveo is still many months off, we sincerely hope that GM won’t change it too much from this show car. After all, GM certainly can’t afford for the new Aveo to be another belly-flop, and if the RS really does show the shape of things to come, we’re eagerly anticipating the new car’s arrival.

Click through the attached gallery to see the Aveo from all angles, and scroll down to read GM’s official press release.

– Dynamic hot hatch designed to appeal to young enthusiasts
– Personalization is built into the design
– Roominess and upscale amenities not usually found in subcompacts
– 1.4L I-4 Ecotec turbo delivers exceptional fuel economy with performance when needed

DETROIT – Chevrolet today announced the world debut of the Aveo RS show car at the 2010 North American International Auto Show. It features a European-inspired hot hatch look designed to appeal to young enthusiasts, and hints at the next-generation Aveo.

Longer, wider and more spacious than the current production Aveo, the Aveo RS showcases the car’s upscale-looking design cues both inside and out, and presents the many personalization options potentially available on the next-generation car.

"We hope the Aveo RS show car will demonstrate that we are as serious about redefining the Aveo and its place in the small-car segment as we were about reinventing the Malibu," said Jim Campbell, Chevrolet general manager.

The Aveo RS show car, finished in electric Boracay Blue, wears global Chevrolet design cues such as the dual element grille, round taillamps and fender flares, but designers turned up the attitude on the show car with low openings and a lower mouth trimmed in a combination of brushed and polished aluminum. Outboard fog lamps are integrated into an exaggerated brake-cooling inlet that flows into the front fender flares, creating an aggressive-looking face.

Exposed headlamps, with their brushed aluminum structural surround, are inspired by the designers’ affection for motorcycles. The sleek side profile is characterized by uninterrupted body side lines, a high beltline and low roofline. The side mirrors with amber-colored turn signal indicators carry the same shape as the car and seemingly disappear into the profile. At first glance, the car actually looks like a three-door hatch because the rear door handles are discreetly located in the "C"-pillar area.

"The Aveo RS show car demonstrates how progressive design can inject personality into a small car," said Michael Simcoe, executive director, North American Exterior Design. "We want customers to see it and have an emotional reaction to it."

The rear of the show car continues the sport theme, with an integrated spoiler that flows from the roof, a center-mounted exhaust and chrome exhaust tips. The exposed motorcycle-inspired rear taillamps feature tinted aluminum housings and a discreet Bowtie logo.

With its matte black interior highlighted by gloss black, metallic and blue accents, the Aveo RS show car reflects as much attention to detail as the exterior. The Boracay Blue theme continues inside, with accent stitching across the dual cockpit instrument panel, front and rear door insert, steering wheel rim, gear shift boot, parking brake, leather seat bolster and even the floor mats. The integrated center stack holds the gearshift, HVAC controls and the sound system, including a USB port. Ice-blue backlighting on the audio display, telltale indicator screen and knobs augments the blue stitching.

The motorcycle inspiration also carries inside, with a round, analog tachometer set within an asymmetrical LCD readout also trimmed in milled metal with round cutouts; and round, aluminum-trimmed side vents.

The interior is as functional as it is stylish, with storage compartments in the center stack and doors. The rear seats fold flat for carrying larger items.

The Aveo RS show car is powered by the same highly efficient 138-horsepower (103 kW) 1.4L I-4 Ecotec turbocharged engine that will be available in the upcoming Chevrolet Cruze.

A six-speed manual transmission is designed to ensure the car will provide a spirited driving experience.

For the show car, designers created a special engine cover in graphite silver with a brushed aluminum insert. The coolant and power steering fluid fill caps are rimmed in ice blue, and the honeycomb vents flanking the center of the cover are matte-finished in shadow chrome and designed to match the wheel color.

Chevrolet has previously announced the new Aveo will be built at Orion Assembly in Orion Township, Mich., in 2011, a move that will restore 1,200 jobs to Southeast Michigan. Timing for retooling Orion Assembly for Aveo production is anticipated to begin in late 2010.

Chevrolet is one of America’s best-known and best-selling automotive brands, and one of the fastest growing brands in the world. With fuel solutions that range from "gas-friendly to gas-free," Chevrolet has nine models that offer an EPA-estimated 30 miles per gallon or more on the highway, and offers two hybrid models. More than 2.5 million Chevrolets that run on E85 biofuel have been sold. More information can be found at www.chevrolet.com. For more information on the Volt, visit http://media.gm.com/volt.