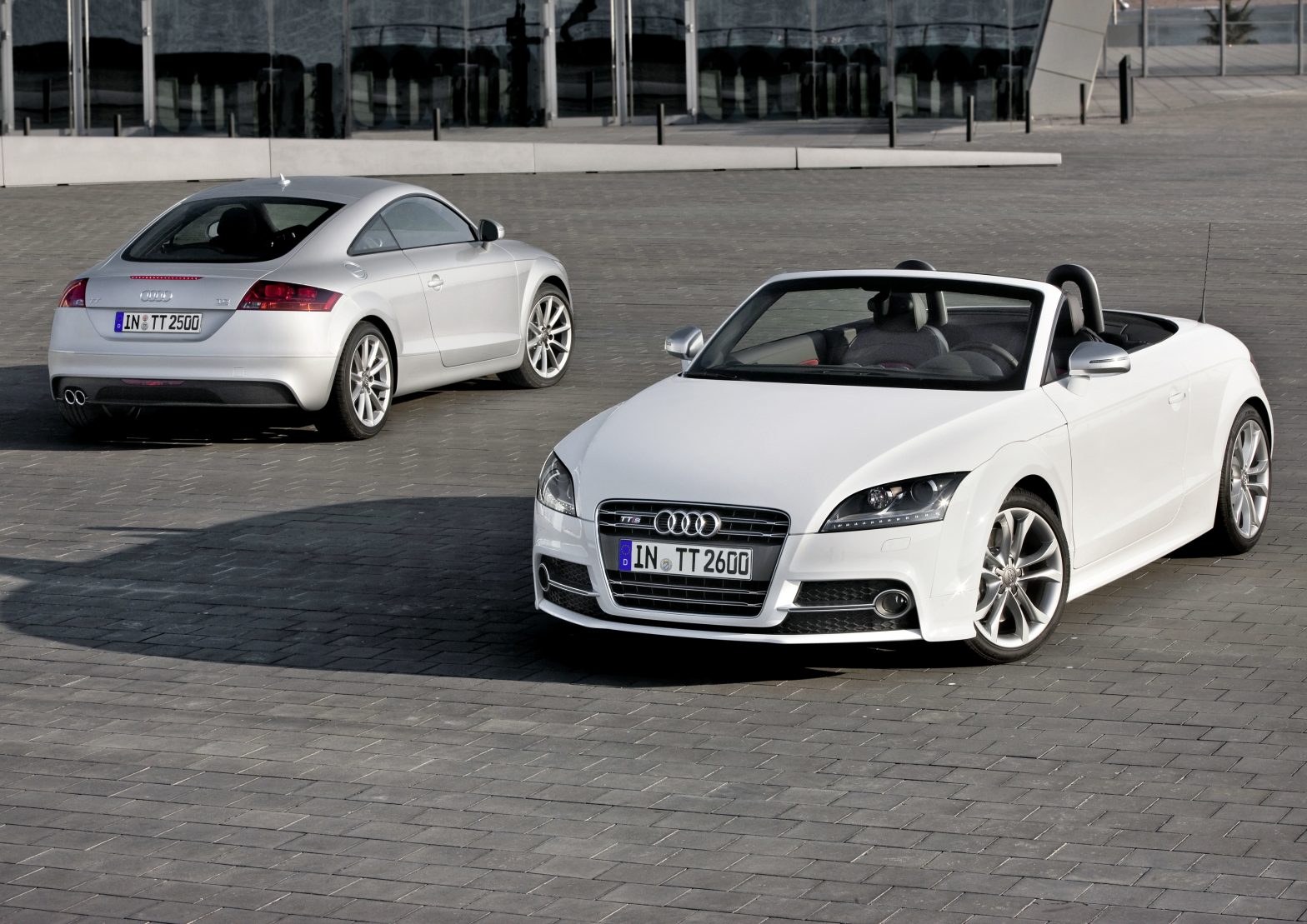 The current generation of the Audi TT has been on the market since 2007, which means it is just about due for an update, and the crew from Ingolstadt has done just that for the 2011 model year.

The standard TT 2.0T TFSI Quattro marches on with the venerable 2.0-liter turbocharged inline-four engine, Quattro all-wheel drive, and the Audi S-Tronic dual clutch gearbox. The 2.0T gets a bump in horsepower from 200 to 211, but that isn’t the big news. The 2010 model made due with 207 pound-feet of torque, but with the new Audi Valvelift System, the 2011 TT gains a massive 51 pound-feet of twist. According to Audi, 0-62 miles per hour should be dispatched in 5.6 seconds, .3 seconds faster than 2011.

The rest of the mid-cycle update looks to be standard practice; redesigned bumpers, interior trim, and new paint options.

There are no mechanical changes for the TTS, but it does receive a new grille and fog lamps.

INFO IS SUBJECT TO CHANGES AND UPDATES PRIOR TO LAUNCH

Philosophy
• Audi TT gave Audi new credibility in performance and luxury when the concept first debuted in 1995 and with the worldwide production launch in 1998.
• While many car companies copied the original Audi TT’s style and philosophy, there were many production breakthroughs that occurred with the vehicle. One included a new laser welding technique in the rear C pillar, and another included a dual factory production system that originated at Audi headquarters in Ingolstadt, Bavaria, Germany, and then finished at Audi’s high tech engine and production finish location in Gyoer, Hungary.
• Audi continued the evolution of the icon with the latest generation TT (launched April 2007 as a 2008 model year vehicle) and now with its product improvement for model year 2011. Staying true to the design-driven marriage of form and function, the TT offers a higher level of driving performance. Innovative performance features and options include the mixed aluminum and steel Audi Space Frame, available Audi magnetic ride damping system and S tronic dual clutch transmission capable of 0.2 second shift times. Larger in every aspect except for height, the TT offers considerable functionality amongst its competitors. The Coupe in particular offers 50/50 folding seats providing enough room to store two golf bags. The Roadster also offers a load-through facility with ski bag. Overall, the second generation TT Coupe and TT Roadster represent the next chapter of the TT story, focusing on high design inside and out, sharper performance and everyday functionality.
• The high tech aluminum/steel Audi Space Frame that all TT models are built from allows the sports car to be both larger and lighter than the previous model, while also increasing torsional rigidity. In fact, ASF allows the Roadster to be even more rigid than the previous generation coupe; the Roadster has 58% aluminum / 42% steel and is 120% more rigid than its predecessor and 188 lbs. lighter; the Coupe has 69% aluminum / 31% steel and is 50% more rigid than its predecessor, and 166 lbs. lighter.
• Since model year 2010, the entire TT line is offered exclusively with quattro all-wheel drive for superior traction and performance characteristics. The TT is the only all-wheel drive sports car in its class.
• Building on the innovations of the TT, the TTS is the top model in the TT family, delivering performance through the most powerful engine in the line-up and superior traction and control through standard quattro all-wheel drive and TTS-specific Audi magnetic ride.
• The topline TTS is the highest performing TT ever brought to market. It is a genuine sports car, with a remarkable driving experience and striking design elements. TTS represents the Audi ethos through advanced technology, high performance, high efficiency and sporty design. TTS embodies performance through innovation, passion through intelligence.
• The TTS model’s ultra efficient direct injected, turbocharged 2.0TFSI engine w/133hp per liter offers both exceptional acceleration and class leading** fuel economy, while also achieving a ULEV II emissions rating. (0-60: Coupe 4.9sec, Roadster 5.1sec; MPG: 21city/29hwy/24combined).

Launch Timing
• TT and TTS models are produced in both Ingolstadt, Bavaria, Germany, and Gyoer, Hungary. 2011 TTS goes on sale in Fall 2010, while the TT 2.0 TFSI quattro goes on sale in the first quarter of 2011.