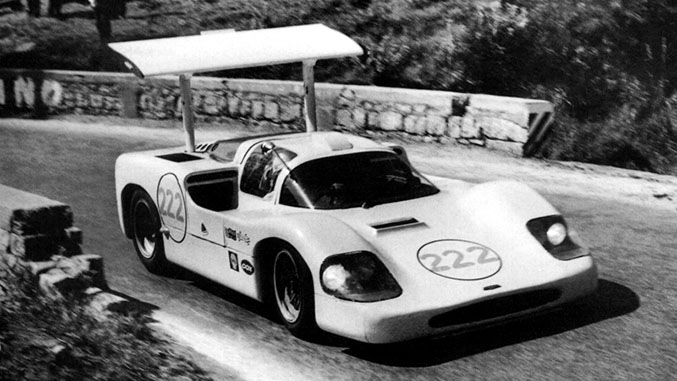 Chaparral 1
Hall and Sharp started by purchasing the Chaparral name from Troutman & Barnes.  Starting with a clean sheet of paper, the newly-formed company set out to build a world-class racer capable of taking on the most advanced cars hailing from Europe and the United States.  The Chaparral 1 had a front-mounted engine that spun the rear wheels, a setup that was quickly becoming obsolete in the early 1960s.  Hall wanted to install the engine over the drive wheels without resorting to front-wheel drive so he decided early on to shoehorn the mill behind the passenger compartment.
Chaparral teamed up with a boat builder based in Fort Worth, Texas, named Andy Green to design a multiple-box chassis crafted out of steel-reinforced fiberglass.  Hall and Sharp believed fiberglass was better than aluminum because it broke locally, meaning it could be easily and quickly repaired in the pits in the event of an accident.  The 2 was fitted with an aerodynamic open-top body that featured a pointed front end and a truncated rear end.

Chaparral 2A
Power for the 2 came from all-aluminum Chevrolet-sourced 5.3-liter V8 engine that featured mostly stock internal components.  Although Chevrolet officially withdrew from factory-backed racing in 1957 following an industry-wide ban, the company is believed to have given Chaparral a great deal of support over the course of the 1960s.
The Chevy V8 used four Weber carburetors to generate over 400 horsepower, a healthy amount in a car that tipped the scale at a little over 1,600 pounds.  Power was sent to the rear wheels via a Colotti-designed four-speed manual transmission while Girling disc brakes on all four corners helped bring the car to a stop.

Chaparral’s workshop was located a stone’s throw from the two-mile-long Rattlesnake Raceway on the outskirts of Midland, Texas, which helped engineers fine-tune the 2 without having to go through the time-consuming process of reserving a spot at a public track.
The Chaparral 2 was ready to race in time for the 1963 edition of the Los Angeles Times Grand Prix.  The 2 proved faster than the competition but it abandoned the race after suffering an electrical fire.  Although the car was repaired in a timely manner, mechanical issues plagued the Chaparral team for the remainder of the 1963 season.  However, it was undeniably fast and Hall saw enough potential in the 2 to retire from Formula 1 in order to focus on developing the car.
One of the most notable changes made for the 1964 season was replacing the manual transmission with a GM-sourced automatic unit.   Hall heralded the automatic as an improvement over the four-speed manual because it allowed the driver to focus his attention on braking rather than shifting while taking a corner.  The Chaparral 2’s transmission remained an enigma on the track for several seasons, causing massive speculation among rival teams, the press and fans alike.
"Some [journalists] write what they think it is and some write that they know what it is, but nobody has written down what it is,” explained Hall in a May, 1967, interview with Sports Illustrated.
The updated Chaparral 2 won numerous events in the 1964 season of the United States Road Racing Championship (USRRC) including races in Pensacola (the 2’s first-ever victory), Laguna Seca, Watkins Glen and Mid-Ohio.  The car continued to dominate race tracks the following year, beating the iconic Ford GT at the 12 Hours of Sebring.

Chaparral 2D
The Chaparral team made constant improvements to the 2.  As it got faster and faster, its body was modified with more advanced aerodynamic add-ons designed by Hall using knowledge gleaned from the world of airplanes.
Chaparral launched an evolution of the 2 called 2C in October of 1965.  It weighed 1,550 pounds thanks to an aluminum chassis, and it was equipped with a revolutionary hydraulic spoiler that could be adjusted using a pedal mounted in the driver’s footwell.  This setup allowed the driver to tilt the spoiler when extra downforce was needed such as when taking a corner, and to straighten it out in order to reduce drag when downforce was not required.
The original 2A was fitted with a roof and transformed into the 2D in time for the 1966 season.  The car was unexpectedly plagued with mechanical problems but drivers Phil Hill and Joakim Bonnier managed to drive it to victory in the ADAC 1,000-kilometer race that took place on Germany’s grueling Nürburgring track, beating big names like Porsche and Ferrari and marking Chaparral’s first win on the Old Continent.  The 2D participated in other events including the 24 Hours of Le Mans but it was taken out of the race by a mechanical failure after 111 laps.

The SCCA’s famed Can-Am series appeared that same year with very little technical restrictions, allowing teams to resort to innovative solutions in order to log the best lap times.  Eager to participate in Can-Am, Chaparral built an evolution of the 2C called 2E that was equipped with an oversized wing mounted on tall struts that sent downforce directly to the rear suspension.  The 2E’s wing could be adjusted with a pedal linked to roughly the same mechanism that was found in the 2C.
The 2E was moderately successful, winning a race at Laguna Seca with Phil Hill at the wheel and taking second at Mosport and Riverside.
Chaparral built other evolutions of the 2 including the 2F, a coupe that boasted the same tall wing as the 2E, the 2G and the 2H.  The G and the H were cursed with miscellaneous issues and neither car managed to win a race.

Chaparral 2F
One of the best-known evolutions of the Chaparral 2 is the 2J.  Also known as the Sucker Car, the 2J was equipped with a small two-stroke snowmobile engine that spun a pair of fans designed to suck air out from under the car, accomplishing Hall’s goal of creating downforce without adding drag.  Lexan side skirts created a seal around the underbody and reduced the amount of air the fans had to suck out.
The 2J weighed 1,810 pounds.  To cope with the extra weight added by the fans and the snowmobile engine, the 2J packed a fuel-injected Chevrolet-sourced 7.6-liter V8 engine that sent 680 horsepower to the rear wheels via a three-speed automatic transmission.

Chaparral 2J
The fans were designed to spin at a continuous speed to create the same amount of downforce regardless of how fast the 2J was going.  Although brilliant on paper, the setup was unreliable on the track and it took Hall and his team several races to fine-tune it.  In the meantime, other teams started to complain about the car and SCCA banned the 2J near the end of the 1970 season on account that it was equipped with a “movable aerodynamic device.”
Presumably tired of bickering with race authorities, Hall closed his shop shortly after the 1970 season and largely stayed out of racing until Chaparral started participating in Indy car races in 1978.
Tags:
Jim Hallrace car driver and engineerracer

In lead-up to London’s auction, we have selected our favorite 10-cars which are being listed for sale.  With 40 astonishing vehicles available, we found it as tough a task as it was when we did the same for their Pebble Beach auction.  Would you have selected the same cars?