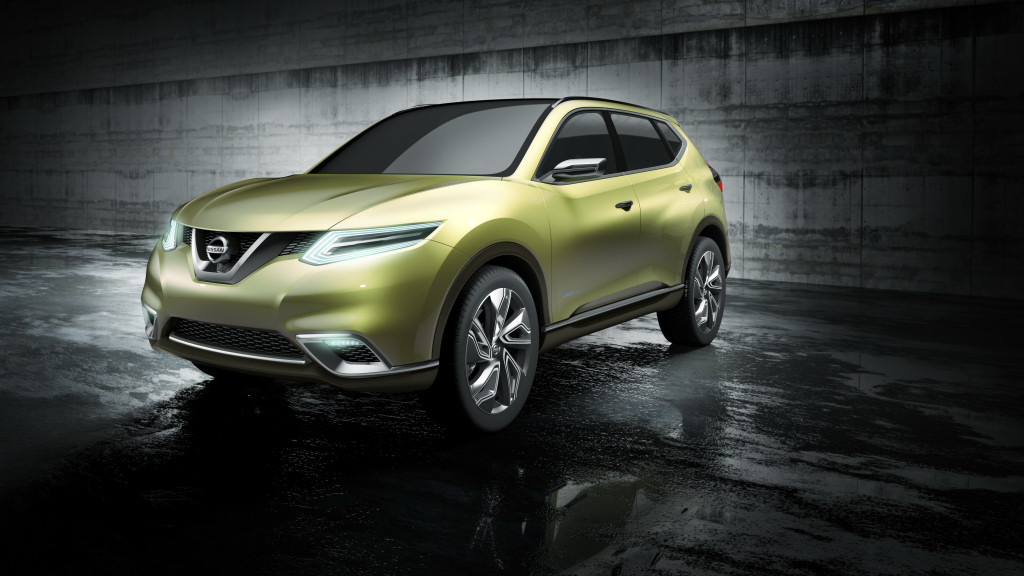 Nissan has just taken the wraps off of its Hi-Cross crossover concept. This design study points at future styling directions for the Juke and Murano, and the European Qashqai crossovers.
The concept is powered by a hybrid drivetrain, with a lithium-ion battery mated to a 2.0-liter, directly-injected gas engine. The output is claimed to rival that of a 2.5-liter engine, although that still doesn’t tell us too much. The hybrid system has been modified for an all-wheel-drive system, with power being transmitted through a continuously variable transmission.
While the Hi-Cross is only a design study, it’s likely that its hybrid drivetrain and styling cues will end up on future Nissan crossovers.
Please scroll down for the official press release from Nissan.
NISSAN SHOWS FUTURE CROSSOVER THINKING
Hi-Cross Concept explores how one member of Nissan’s next generation crossovers could look… and how it might be powered
Geneva World Premiere for future crossover proposal
Hi-Cross Concept shows possible new design direction
Innovative hybrid petrol/electric power train
Next generation CVT for ultimate efficiency
Roomy interior with seven seats
A dramatic new concept car from Nissan, to be given its World Premiere at the 2012 Geneva Motor Show, heralds a possible new design direction for the company.
Called the Hi-Cross Concept, the proposal looks at ways to extend Nissan’s leadership of the crossover market with a possible expansion of the current Juke-Qashqai-Murano portfolio. Created in Japan, Hi-Cross Concept is compact yet surprisingly roomy, elegant yet purposeful and – being a Nissan – it’s clever with it.
Its ‘smartness’ takes two forms. Despite its modest external proportions, Hi-Cross Concept has a highly space efficient interior with three rows of seats for seven passengers.
Equally as clever is its hybrid drive train, coupling an electric motor – powered by a Nissan-developed compact lithium-ion battery – with a 2.0-litre direct injection petrol engine to provide the performance potential of a 2.5-litre with the economy and emissions expected from a much smaller unit.
Andy Palmer, Executive Vice President, Nissan Motor Co. Ltd., said: "Nissan created the crossover segment with Murano and has expanded the genre with top selling cars like Qashqai and Juke. Hi-Cross Concept shows we are not sitting still, resting on our laurels, but exploring ways of cementing our crossover leadership by exploring new ideas."
For the concept, the HEV drivetrain is based on new technology developed by Nissan for front-wheel drive models, but modified to provide four-wheel drive. The new system’s innovative approach to affordability and packaging adopts ‘one-motor, two clutch’ technology linked to Nissan’s new generation XTRONIC continuously variable transmission which by itself achieves a 10 per cent improvement in fuel economy over comparable previous generation CVTs. The low friction design has smaller shaft-diameter pulleys with a new belt to give the widest possible ratio coverage for enhanced efficiency.
The hybrid drivetrain makes extensive use of battery technology developed for the award-winning Nissan LEAF. The high output, fast-charging compact lithium-ion battery, linked to high-level motor control technology, provides acceleration assist when needed and permits downsizing of the petrol engine for optimum economy and emissions.
In city driving, the presence of the electric motor and lithium-ion battery allow the engine to be turned off frequently. It can also be disengaged completely with the clutch, and energy can be recovered effectively when braking.
Built on an extensively revised version of Nissan’s Hi-Cross Concept sits on a 2780mm wheelbase. It is 4660mm long, 1850mm wide and 1670mm tall, with 21-in. alloy wheels. The styling combines existing Nissan design cues with new elements, at the front it has a characteristic V-shaped grille set off by distinctive lighting signatures provided by stylish new headlamps.
Potential new design language is showcased, in particular, by a bold character line which extends from the bonnet down the flanks of the car to the D-pillar. At the rear it has distinctive lighting signatures provided by stylish rear combination lamps echoing with headlamp lighting signature. Inside, the seven-seat cockpit is dominated by a new T-wing shaped dashboard.
François Bancon, Deputy Division General Manager of Product Strategy and Product Planning Division , said: "Although this is purely a concept car, exploring potential ideas for the future, there is no ambiguity about its purpose. It is a high-riding crossover, hence its name: Hi-Cross Concept.
"But the name does more than refer to its shape. The ‘Hi’ refers equally to the idea of extended value, to the levels of innovation found in the drivetrain and, of course, to the excitement promised from the behind the wheel."
Tags:
Andy Palmerconcept carExecutive Vice PresidentGeneva 2012Hi-CrossMuranoNissanNissan Hi-CrossNissan Motor Co. Ltd.