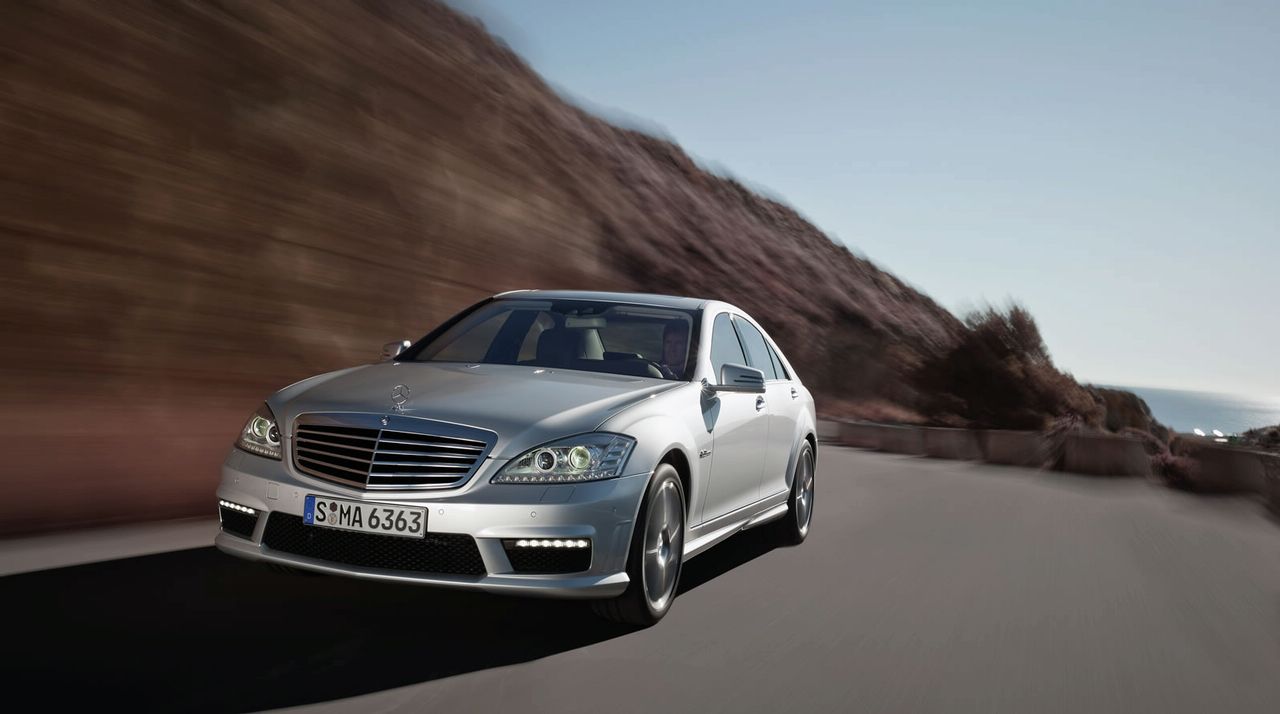 Mercedes-Benz launched the S400 Hybrid and S600 versions of the 2010 S-Class at the New York Auto Show earlier this month, but we now have the official details about the "turned up to eleven" S63 and S65 AMG. No drastic power numbers have been tweaked — the S63’s 6.2-liter V-8 cranks out 525 horsepower and 465 pound-feet of torque, and the S65’s twin-turbo V-12 boasts 612 horsepower and 738 pound-feet. Additionally, the engines have been slightly tweaked to improve fuel economy, though we’re sure that Green-minded car buyers aren’t exactly looking for anything with an AMG badge.

To the eye, it’s clear to see that the AMG S-Class receives visual updates like LED running lights, LED taillights, and a redesigned rear bumper. And as expected, the cabin features an array of highly luxurious and tech-friendly goodies, similar to those on the rest of the S-Class range. Prices will remain roughly unchanged, with the S63 coming in around $130,000 and the S65 commanding just south of $200k.

The Mercedes-Benz S 63 AMG and S 65 AMG, the powerful top-of-the-line S-Class models, are now even more appealing: thanks to a series of subtle yet extremely effective fine-tuning measures, the two performance saloons are even more striking and priceless than ever before. The updated technology is aimed at ensuring a more dynamic driving experience as well as optimum active and passive safety.

Exclusivity and dynamism combined with effortless superiority and state-of-the-art technology – both of the top S-Class models from Mercedes-AMG embody all of these characteristics and more: the S 63 AMG, with its 386 kW/525 hp AMG 6.3-litre V8 engine developing 630 Newton metres of torque, is capable of accelerating to a speed of 100 km/h in 4.6 seconds. The S 65 AMG, meanwhile, demonstrates even greater superiority: its AMG6.0-litre biturbo V12 engine delivers maximum power of 450 kW/612 hp and maximum torque of 1000 Newton metres, accelerating from 0 to 100 km/h in just 4.4 seconds. Both saloons are electronically limited to 250 km/h. Despite no changes having been made to the engine data and performance values, it has still been possible to reduce fuel consumption and CO2 emissions by up to 3 percent.

Contributing to the even more exceptional status of the models is the new, more pronounced arrow-shaped radiator grille, featuring twin chrome-plated louvres in the case of the S 65 AMG. The new front apron incorporates striking, AMG-specific LED daytime driving lights and two transverse air outlets on each side. Further striking features include the "6.3 AMG" or "V12 Biturbo" lettering on the front wings and redesigned exterior mirrors.

Side sill panels emphasize the elegant line of the front apron through to the rear of the vehicle, where the new rear apron features yet another highlight: the centre section of the diffuser insert is now painted in the same colour as the vehicle body. New rear lamps with 52 LED’s in the form of a double "C" also give the S?Class an unmistakable appearance from behind. A distinctive element of both models comes in the guise of the sports exhaust with two chromed twin tailpipes, featuring a V12 design in the case of the S 65 AMG. Visual aspects which distinguish the V8 from the V12 model also include the attractive AMG light alloy wheels: the S 63 AMGhas 19-inch multi-spoke wheels painted titanium grey with a high-sheen finish and fitted with 255/40 (front) and 275/40 (rear) tyres. The S 65 AMG, on the other hand, comes with 20-inch forged wheels painted in titanium grey with a mirror finish and fitted with 255/35 (front) and 275/35 (rear) tyres.

The AMGsports suspension based on Active Body Control (ABC) provides crosswind stabilisation as standard equipment for the first time: thanks to this function, influences caused by crosswinds are compensated for, or – in the case of strong gusts – reduced to a minimum. ABC compensates against the effect of crosswinds by adjusting the wheel load distribution within milliseconds, using the yaw-rate and lateral acceleration sensors of the ESP®Electronic Stability Program.

Also making up the standard equipment is the new Torque Vectoring Brake: when cornering, brief direct application of the brakes has an effect on the vehicle’s inner rear wheel so that the saloon corners precisely and under control at all times. The Torque Vectoring Brake is an additional feature of the ESP® Electronic Stability Program and not only improves responsiveness but also active handling safety, which is particularly noticeable in critical conditions. The driving experience is further heightened thanks to the Direct-Steer system: with its variable ratio depending on steering angle, it helps to ensure a more direct response when cornering, and therefore more responsive handling – in brief: enhanced driving pleasure at the wheel of the Mercedes-AMG S-Class.

Based on the ADAPTIVE BRAKE system, the high-performance braking system continues to provide optimum creep strength, deceleration and sensitivity. The front axle features a double floating brake calliper. This exclusive technology combines the advantages of a sliding-calliper disc brake – reduced heat transfer to the brake fluid and clear advantages in terms of comfort thanks to the brake lining guide mechanism – with the efficiency of an extra large fixed calliper brake.

The interior appointments are every bit as exclusive as the high-tech package: as soon as its door is opened, the S 65 AMG welcomes the driver with large, animated "AMGV12 BITURBO" lettering in the instrument cluster’s central display. The main menu provides the driver with information about engine oil temperature, current gear range, battery voltage, and the RACETIMER, which displays lap times when on the race track. In the case of the S 63 AMG, the extensive range of standard equipment includes not only PASSION leather appointments, with natural leather in the seat side bolsters, but also front sports seats with climate control, massage, multicontour and driving dynamics control functions. The Exclusive PASSION leather upholstery in the S 65 AMG, meanwhile, with its AMG V12 diamond pattern design, exudes an air of even greater refinement. Ample use of burr walnut trim elements and the AMG-specific analogue clock, featuring an IWC design, are a given in both models. Both the SPEEDSHIFT 7G?TRONIC of the S 63 AMG, as well as the five-speed automatic SPEEDSHIFT transmission of the S 65 AMG, are fitted with DIRECT SELECT gearshift. Gear changes are carried out by means of aluminium shift paddles on the new AMG sports steering wheel.

In addition, both of the top-of-the-line models set new standards when it comes to active and passive safety through a combination of innovative camera and radar-based driver assistance systems. These include the ATTENTION ASSIST drowsiness detection system, Adaptive Highbeam Assist, Lane Keeping Assist, and the PRE-SAFE®Brakes, which are linked to the proximity regulating radar and intervene independently in the event of an impending accident to act like an invisible crumple zone. The Night View Assist with infrared camera also features a novel pedestrian detection system. The pictures from the windscreen camera are also used by the new Speed Limit Assist, available as an option. The Brake Assist PLUS and DISTRONIC PLUS proximity control support the driver in the event of emergency braking. The PRE-SAFE® positioning function and NECK-PRO luxury head restraints are now also included as standard.

Exclusive optional extras are also available from the AMGPERFORMANCE STUDIO: