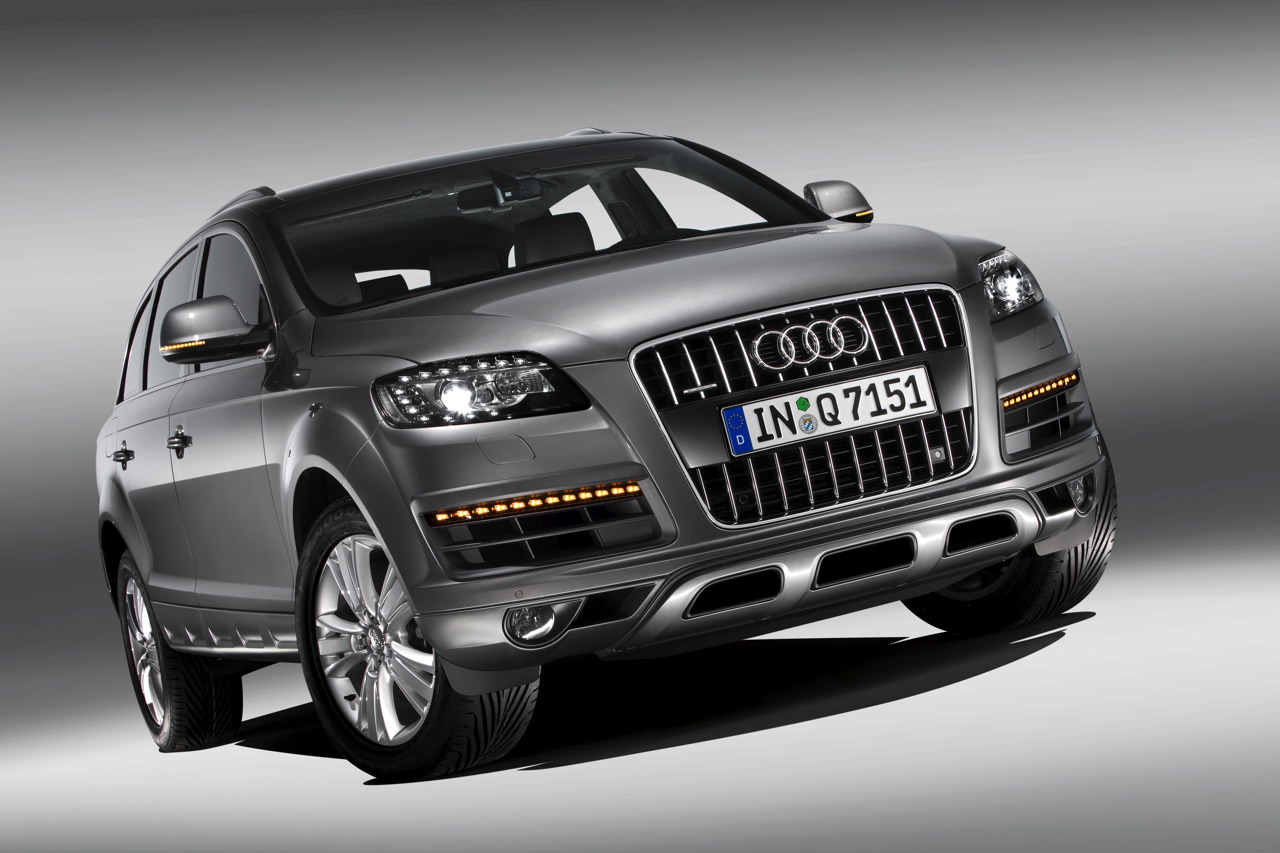 Audi has released the 2010 Audi Q7 SUV, and it has received some minor changes. On the outside, it now has some LEDs up front, and the rear lights are also LED. The front bumper and tailgate have been slightly reshaped.

For the interior, the Q7 gets the MMI 3D interface for communication, navigation, and multimedia, which the automaker introduced earlier in the year for the Q5.

Under the hood, the U.S. gets the same engine lineup, with the addition of a 3.0-liter TDI, capable of 240 horsepower and 17/25 miles per gallon. Europeans also get Audi’s available V-12 TDI engine, along with an updated, more efficient V-8 TDI.

Scroll down to read the press release.

When it was first rolled out three years ago, the Audi Q7 performance SUV immediately achieved a leadership position – as a sporty, comfortable as well as high-performance recreational and business vehicle on a grand scale. Now Audi is making it even better – more elegant and more efficient, with lower emissions: the Q7 3.0 TDI consumes only 9.1 liters per 100 kilometers (25.85 US mpg). And now it’s also available in a new version as a TDI clean diesel, with the world’s cleanest diesel technology and even lower fuel consumption of only 8.9 liters/100 km (26.43 US mpg).

The Q7 is the large Audi for sporty individualists, for people who are seeking a vehicle that will take them anywhere they want to go for sports, recreation, and business. Its dynamic proportions and distinctive lines express this character, and subtle modifications endow its styling with even more elegance.

The design: The language of dynamics

At the front end, the large single-frame radiator grille has been redesigned. Vertical chrome bars contrast with its black high-gloss finish. The bumpers too have been restyled. Their lower section is now painted in a contrasting black or gray, depending on the body color. The newly integrated underbody protection in the center section of the bumper has a distinctive ribbed design.

As alternatives to the standard halogen headlights, Audi offers a xenon plus variant and a new adaptive-light system that integrates not only low-beam, high-beam and a special superhighway beam but also turning and cornering lights. In conjunction with the xenon headlights, light-emitting diodes assembled to form
U-shaped bands provide the daytime running lights. The front blinkers are also composed of LEDs as straight-line arrays, located at the upper edge of the air intakes.

The side view too, with its coupe-like roofline, low window area and tautly curved body surfaces, reinforces the dynamic look of the Q7. Door moldings have been modified to add interest. The lightweight alloy wheels are size 7.5 J x 18, the wheels size 235/60. In the V6 vehicles they have seven spokes, in the V8 versions they have six.

At the rear end, the bumper has also been given two-tone paintwork; the tailgate, which includes a portion of the rear pillars in an S-shaped contour, has been given a new and distinctively 3D shape in the vicinity of the license plate bracket. To reduce the weight of the Q7, the tailgate has been made of aluminum, as have the engine hood and the fenders. Standard LEDs in the tail lights create a distinctive lighting pattern.

Eleven paint finishes for the Audi Q7 include four new shades: Ibis White, Graphite Gray, metallic, Teak Brown, metallic, and Orca Black, metallic. An aluminum exterior package is optionally available from Audi: gleaming chrome bars in the bumpers and door moldings; the lower portion of the bumpers is painted in the body color; the center portion of the front apron and the diffuser are painted in a contrasting shade.

The interior: Room to spare

Thanks to its luxurious 300-centimeter (118.11-inch) wheelbase within an overall length of 5.09 meters (16.70 feet), the Audi Q7 has interior room to spare, and the interior flexibility is unrivalled. The seatbacks in the second row are divided into three fold-down sections to provide a level cargo floor.

This increases the luggage space from a volume of 775 liters (27.37 cubic feet) to 2,035 liters (71.87 cubic feet). With the leather upholstery option, the middle seat now has an even more comfortable contour.

Two very useful features are optionally available: either a longitudinally displaceable second seat row or individual comfort seats that are separately displaceable. Another available option is a third row for passengers no taller than 1.60 meters (5.25 feet), combined with an improved easy entry function.

A multitude of detailed improvements in the interior enhance the elegance and the sense of well-being. The instrument cluster has been redesigned: the large, round, easily readable instruments are encircled by metallic frames. Interior lights in the door linings and an inlay on the passenger side enhance the interior styling. Many details of the control elements have been restyled and also enhanced by chrome elements.

The power train: Performance and efficiency

The Audi Q7 is available with six powerful and highly efficient direct injection engines, two of them gasoline-powered and four diesel engines, including the world’s most powerful diesel SUV, the Audi Q7 V12 TDI. Their power is transmitted via a convenient and fast-shifting six-speed tiptronic to the quattro permanent all-wheel drive, which distributes it between the axles with slightly more than half to the rear.

Despite highly complex exhaust gas recirculation and the resulting world’s cleanest diesel technology, it consumes just 8.9 liters/100 km (26.43 US mpg).  It meets the strict ULEV II Bin 5 US standard and already complies with the Euro 6 limits announced for 2014.

The technology of the TDI clean diesel is highly complex. An advanced version of the common rail injection system with 2,000 bars of pressure, new combustion chamber sensors and a high-performance exhaust recirculating system ensure a highly efficient combustion process. An innovative DeNOx catalytic converter reduces the remaining nitrogen oxides. Just upstream of it, a pump injects an additive named AdBlue into the hot exhaust flow, where this solution decomposes into ammonia, which splits the nitrogen oxides into harmless nitrogen and water. Audi partners replenish the additive during regular maintenance servicing.

A novel technology from the Modular Efficiency Platform further improves fuel efficiency in all the engines: the recovery system, which during braking and coasting phases converts mechanical energy into electric energy and buffer-stores it in the battery. It reduces CO2 emissions by up to 5 g/km (8.05 g/mile).

The chassis: Safe and sporty

In its suspension technology too the Audi Q7 is exceptional. As a customer option, Audi equips the Q7 with adaptive air suspension – a pneumatic suspension system that operates in conjunction with an electronic shock absorber control, varies the ground clearance at five different levels, and lets the driver select three driving modes: comfort, automatic and dynamic. In its road handling the Q7 excels in its sporty, highly responsive precision. Off-road, it provides a superior ride on widely varying terrains.

Optionally available in the eight-cylinder models are carbon-fiber ceramic disk brakes which further enhance the dynamic character of this performance SUV: they are lighter than their steel equivalents, extremely abrasion-resistant and virtually fading-free. They achieve high driving performance and ensure short braking distances. The diameters of the ceramic discs are 420 millimeters
(16.54 inches) in front and 370 millimeters (14.57 inches) at the rear. The calipers are black and adorned with the wording “Audi ceramic”. A total of 24 pistons are used on the front and rear axles.

The equipment: Luxury and high-tech

The Q7 comes with a splendid range of standard equipment. The speed-dependent servotronic steering system is standard, as is a double floor in the cargo area complete with a storage compartment and a dirt tray; there is also a roof rack, an automatic air conditioning system, and an MMI radio operating system complete with a CD audio player and eight loudspeakers.

The option program includes luxury features such as the remote key and four-zone automatic air conditioning. Another high-end option is the climate-controlled comfort seat, which can keep the body warm or cool it by means of small fans.

The Q7 also offers many intelligent solutions for the practical needs of everyday use – such as an electric luggage space cover, a reversible floor mat, a set of luggage rails, a removable ski bag, and a moveable storage box. The options program includes separation grids, an interior bicycle stand, various roof-mounted carriers, a distinctive off-road styling package, and a pivoting trailer hitch: this powerful SUV can tow up to 3.5 metric tons.

In the infotainment field, Audi provides a carefully differentiated selection of modules. The three optional systems are part of the new generation of Audi devices. The top-of-the-line version integrates a hard drive for navigation, music and telephone data, a high-resolution color monitor and 3D map graphics, a DVD player as well as voice control. It can be expanded into a luxury media center with features such as a Bluetooth telephone, a TV tuner, a digital radio tuner, plus rear seat entertainment. A very special highlight is the advanced sound system from Bang & Olufsen with its ten channels, 505 watts of power and 14 loudspeakers.

The range of optional equipment is rounded off by technologies from the luxury class. The radar-supported adaptive cruise control regulates the speed and the distance to the preceding vehicle in a range from 30 to 200 km/h (18.64 to 124.27 mph) by acceleration and deceleration. If a threat is detected, the integrated Audi braking guard warns the driver at two levels.

From a speed of 60 km/h (37.28 mph), Audi lane assist helps the driver stay in lane by means of a camera that recognizes the lane lines. Audi side assist ensures safe lane changes above 30 km/h (18.64 mph) with the aid of a radar system that monitors the traffic pattern within 70 meters (229.66 feet) behind the vehicle. Finally, the Audi parking system advanced assists parking by means of a rearview camera and reference lines on the onboard monitor.

Even when it was first rolled out, the Audi Q7 V12 TDI, the world’s strongest diesel SUV, had a uniquely distinctive look resulting from its large air intakes. The new version features modifications to the interior and the rear end.