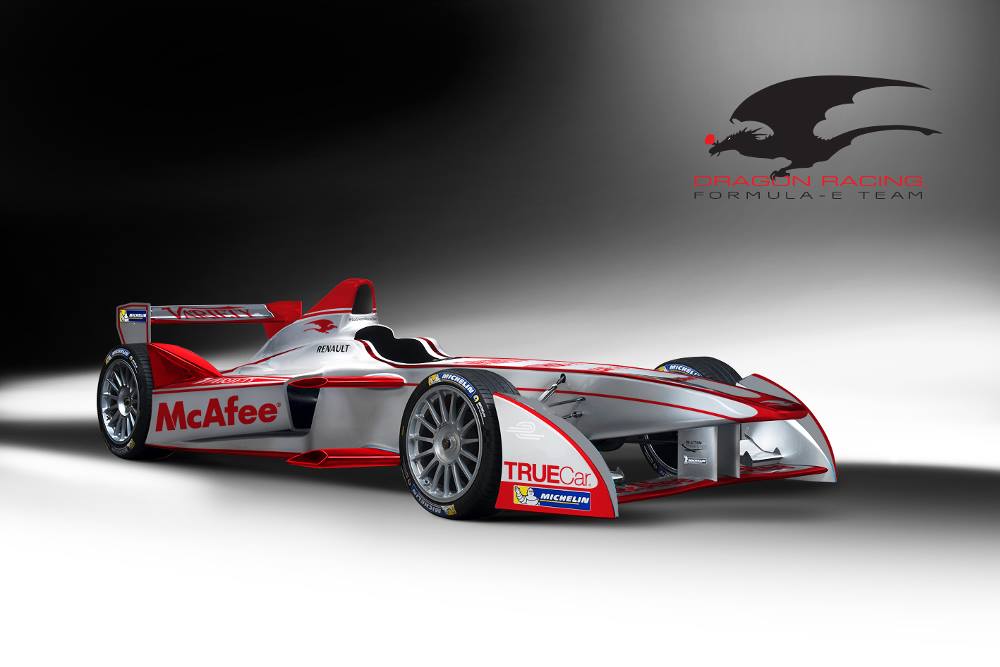 Jay Penske’s Dragon Racing has signed on as the fourth of the ten teams to take part in the electric-only FIA Formula E Championship series. The team, based out of Los Angeles, follows Andretti Autosport as the second IndyCar team to add itself to the roster.
Drayson Racing and China Racing have already signed on, and more teams are expected to fill up the grid by the end of October.
The first season of Formula E will take place in ten cities around the world, including two in the United States, Los Angeles and Miami.
Formula E Holdings has also signed a deal with Fox Sports to distribute the broadcast of the electric, open-wheel racing series. The season begins in September 2014.
Scroll down for more details about Dragon Racing in the press release, below, or learn more at the Formula E website.
DRAGON RACING JOINS FORMULA E CHAMPIONSHIP
Leading IndyCar team becomes the fourth team to join the Formula E Series
LOS ANGELES, USA (24th September, 2013): Leading IndyCar team Dragon Racing has officially become the fourth team to enter the new FIA Formula E Championship.
Dragon Racing is owned by media and publishing entrepreneur Jay Penske. Dragon Racing now joins Andretti Autosport, Drayson Racing and China Racing as one of the 10 teams to be put forward to the FIA to be awarded entry into the world’s first fully-electric race series, beginning in September 2014. Dragon Racing’s Los Angeles headquarters are well placed, as the city has recently become the top market in the world for electric cars.
“It’s an honour for Dragon Racing to have been selected as one of the founding teams in Formula E,” said Jay Penske, Owner and President of Dragon Racing. Penske then added, “Formula E symbolizes a vision for the future of motorsports and the automotive industry, while directly appealing to a new generation of global race fans. Formula E offers a tremendous opportunity for our many technology and media partners, and we look forward to its inevitable growth and ascendancy over the next decade.”
Dragon Racing first began in 2006 under the original banner of Luczo Dragon Racing, founded by both Penske and Steve Luczo, Chairman and CEO of Seagate Technologies. In May of 2007, Dragon Racing made their debut at the Indianapolis 500 finishing an impressive fifth with Ryan Briscoe. Two years later, the team completed its first full IndyCar season while claiming Rookie of the Year with Raphael Matos. Currently, Dragon Racing fields two cars in the IndyCar Series, with drivers Sebastian Saavedra and four-time Series champion Sébastien Bourdais.
Alejandro Agag, CEO of Formula E Holdings, added, “We’re extremely happy to welcome Dragon Racing to the FIA Formula E Championship and are convinced that Jay Penske and the team will be a major contribution to our grid and sport. Today’s announcement also brings to the Championship a team based in Los Angeles – a city whose example of ‘land of electric cars’ we want to help spread to the rest of the world.
“With Dragon Racing lining up alongside fellow IndyCar giants Andretti Autosport, what’s apparent is the continued interest from the States Formula E is receiving from not only teams but also cities, with races taking place in Los Angeles and Miami. We still have more teams to announce over the coming weeks, with the full grid to be made public by the end of October.”
Tags:
Dragon Racinge-signsFormula E HoldingsFox SportsJay PenskeLos AngelesMiamiUnited States