The Stuff of Legend – Mercedes 300 SLR 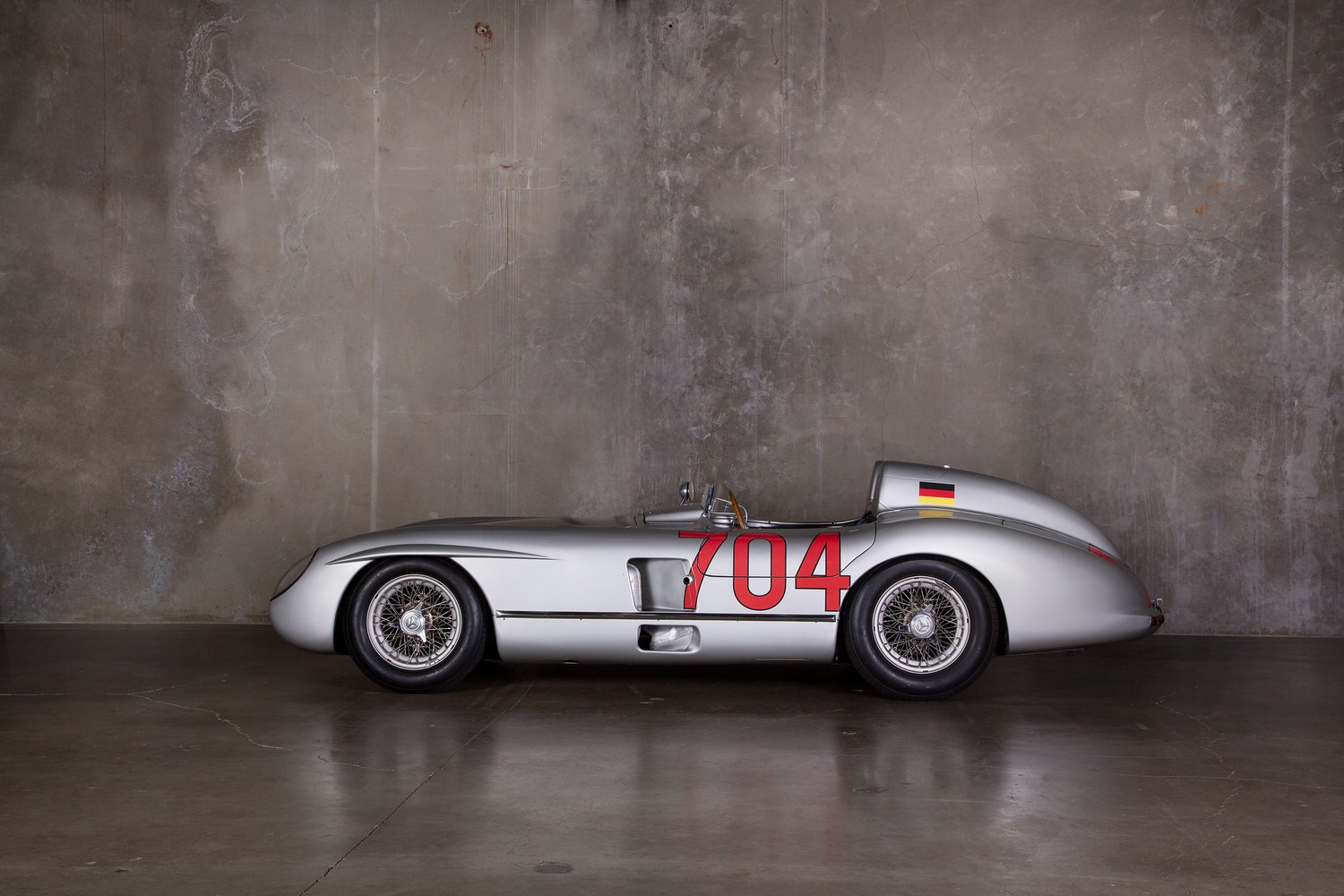 The 1955 Mercedes 300 SLR (the SLR stands for Sport Leicht-Rennen, or Sport Light-Racing) comes cloaked in legend, with stories so big and dramatic and mythic that they nearly keep you from seeing the car itself. But Avants was invited to get up close and peek under the hood of chassis #02, during its last days in the Puget Sound area (more on that later).

Let’s start with the legend. Take the car’s record setting performance at the 1955 Mille Miglia, the 1,000-mile race across the hills of Italy on public roads. The race had long been the measure of automotive speed and endurance. Mercedes started four of its new racing cars, each piloted by one of the most famous drivers of the day (there were also several 300 SLs entered). Four chances to break the speed record for this race. And they did, with the 722 car–so named because it left the start line at 7:22 AM.

The win catapulted the car and its driver, England’s Stirling Moss, into the headlines as they shattered the previous record, finishing in 10 hours, 7 minutes, and 48 seconds at an average speed of 97.96 mph. The victory was at least partially due to Moss’s navigator, Dennis Jenkinson, who prepared a single roll of driving instructions for the race, giving Moss the advantage of complete knowledge of what turn was coming next. The comment at the time was that “Dennis Jenkinson won the 1955 Mille Miglia in a chauffeur-driven Mercedes.”

The Mille Miglia was a dangerous race, not just for drivers but also for the spectators who pressed up to and over the edge of the roadway, to better see and feel and hear the cars hurtling by. The open road race ended permanently just two years after Moss’s win, when two crashes took the lives of the drivers, a navigator, and nine spectators. The speeds reached by cars like the 300 SLR were simply too great to allow this type of racing to continue. Today’s Mille Miglia is a far more controlled affair.

Then there’s the infamous crash at the 1955 24 Hours of Le Mans race. Just two-and-a-half hours into the 24-hour race, Pierre Levegh, driving chassis #06, entered the main straight at high speed. When Austin-Healey driver Lance Macklin swerved left to avoid the pitting Jaguar of Mike Hawthorn, Levegh smashed into the back of the Austin-Healey, launching into the air and breaking into pieces. The engine and other parts of the car scattered into the stands, while the rest of the car lay burning atop the hay bales that lined the track. Workers attempted to extinguish the flames with water, unaware that water was a catalyst that turned the magnesium body into a flaming inferno.

With 84 dead, including Levegh, and 180 injured, it was the worst disaster in the history of motorsport. No fault was assigned to car or driver in the investigation that followed—it was simply the case that the modern cars were faster than the track conditions could support.

The racing continued at Le Mans that day, but not for Mercedes: they withdrew all their cars during the night. Several months later, they announced that they would withdraw from motor racing altogether. Mercedes’ withdrawal from racing is often linked to the horror of the crash, as if this thoroughly rational company was shocked into leaving racing.

The truth is more interesting. Mercedes’ own history explains that they left racing to focus on “major challenges involved in the development of new passenger cars.” But according to Thor Thorson, president of Vintage Racing Motors in Redmond, Washington, the company that has cared for the car in the United States since 2011, Mercedes has another reason for leaving. “They’d made their point,” says Thorson. “They had shown how good they were and didn’t need to prove it again.” In any case, Mercedes didn’t return to racing until 1987.

Though the car’s appearances at the Mille Miglia and Le Mans attract all the attention, the 300 SLR also dominated several other races in that historic season, including the Targa Florio in Sicily and the Tourist Trophy in Ireland, races which assured Mercedes the 1955 World Sportscar Championship. This glorious season of racing made this vehicle “the most famous race car of all time,” according to Collier Automedia.

The speed and the racing dominance feed another legend: that the 300 SLR is the “most valuable car in the world.” Speculators claim the car is worth many millions—but how can you put a price on a car that will never go up for sale? Mercedes has vowed never to sell a car that is at the very heart of its identity as a company. Any value estimates are purely a product of the car’s storied history multiplied by its rarity.

There were only nine of these vehicles ever made; one was destroyed at Le Mans; two were converted into coupés (thus the famous Uhlenhaut coupé, named after the car’s design, Rudolf Uhlenhaut); and of the six roadsters that remain, all are owned by Mercedes and housed in company museums in Munich and Stuttgart, at the Musee National de l’Automobile in Mulhouse, France … and until quite recently, on a long-term loan to northwest collector Bruce McCaw.

“Ever since I first saw one at the auto show in Seattle in 1963, I have been attracted to the power and beauty of the 300 SLR,” explains McCaw. “I have always loved Mercedes, so when I had a chance to add one to my collection for a while I was happy to take it. It has been a wonderful experience, possibly the most exciting old racer I have ever driven.”

Thanks to McCaw’s close association with Mercedes Benz, an arrangement was reached wherein this car was restored from a static museum display into a fully operational racer in exchange for a multi-year loan from Mercedes. Vintage Racing Motors in Redmond, with broad experience in Mercedes racing cars, has been tasked with maintaining and supporting the use of the car during its time here. The SLR has been shared with American automobile fans several times over the years, including at the Colorado Grand Rally in 2018 and, most recently, at the Velocity Invitational in 2021, held at the famous WeatherTech Raceway Laguna Seca.

The car featured here is Chassis #000 02/55, Registration AW 847 984 and is usually known as #02. With the legend duly explained, it is worth looking past the history to reveal what it truly is: a triumph of engineering like few others in automotive history.

The 3.0-liter, straight 8 that powered the 300 SLR improved upon the 2.5-liter engine used in the W196 Formula 1 cars that had been so successful for Mercedes. In truth, the 300 SLR was a Formula 1 car, rebodied and slightly modified to meet the requirements of road racing. The engine included such revolutionary features as mechanical fuel injection and desmodromic valves. The direct injection you can easily see in photos, with the big mechanical injection pump sitting on top of the engine, and the sinuous hard lines injecting the fuel directly into the side of the cylinders.

About Avants
Avants is a membership program for gearheads. Members get exclusive access to private events, discounts at premium partners and a great community of like-minded enthusiasts. All members receive the Avants magazine – a high-gloss quarterly publication that celebrates interesting people in the car community. Avants is currently live with weekly events in Seattle, Portland, Denver, and Southern California. More regions coming soon!