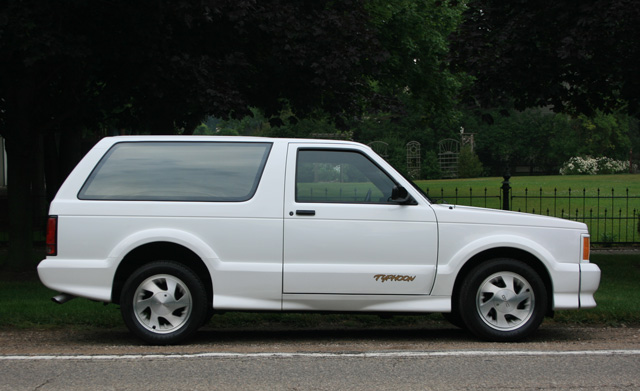 Nothing seems to polarize motoring enthusiasts more than the concept of a performance truck, and the NextAutos office is no exception. What kind of absurd mentality could ever conceive such an abomination as a utilitarian vehicle that aspires to be something other than utilitarian? After all, you could bolt plywood to a shopping cart, tie it to a boat, and go water skiing carting if you really wanted to, but that doesn’t mean you’re going to have a blast jumping the wake or cracking the whip into the beach.

While we don’t recommend any such activity with a shopping cart, this does raise a very important point. When it comes to having fun, sometimes the absurd can deliver an experience that transcends normal definitions, and that’s really what this week’s Keepers segment is all about. Before the Ram SRT-10 or Cherokee SRT-8, before the likes of the Infiniti FX45 or even the F-150 SVT Lightning, there was the 1991 GMC Syclone pickup and its slightly-beefier brother, the 1992-1993 GMC Typhoon SUV. Absurd? Possibly. A driver’s machine? Maybe. Quicker than whisky on an empty stomach?

Obvious pun notwithstanding, this duo took the world by storm thanks to straight-line performance that equaled many bona-fide supercars of the day. General Motors saw fit to grace the pair with a turbocharged and intercooled 4.3-liter V-6, ultimately making 280 horsepower and 350 pound-feet of torque, though many folks suggest these figures were actually a bit conservative. A four-speed automatic was the only transmission offering, and a rear-biased, all-wheel drive system sent the power to all four wheels all the time. As a result, Syclones could nip sixty miles per hour in the mid-to-high four second range, with the heavier Typhoon running just a few ticks slower. Those are impressive figures for dedicated performance cars of today, never mind trucks from almost two decades ago. In addition to the massive thrust, both vehicles received four-wheel anti-lock brakes (a pickup-truck first) and suspension tweaks to the point where they were at least mildly entertaining to drive. Don’t be lulled into thinking these are road racing maniacs however; the handling is best summed up by the term less truck-ish as opposed to more car-like, with the Typhoon and its self-adjusting rear air suspension generally getting the nod as the more livable of the two. Unique body kits and badging set the twins apart from the plebian GMC models, and while each did receive some special interior treatment, anyone familiar with General Motors interior truck design of the early 90s will never the less throw up in their mouths a little at the thought. Those who aren’t familiar, well, consider yourselves fortunate.

Whether you’re for or against the concept of a performance truck, there’s no denying that a whole bunch of people get all tingly over the likes of the Syclone and Typhoon, and that alone says something about their place in the performance halls of history. Can these vehicles be proper enthusiast driving machines? Can amazing straight line performance compensate enough for mediocre handling? Can a shopping cart on plywood be a suitable substitute for a pair of fiberglass skis?