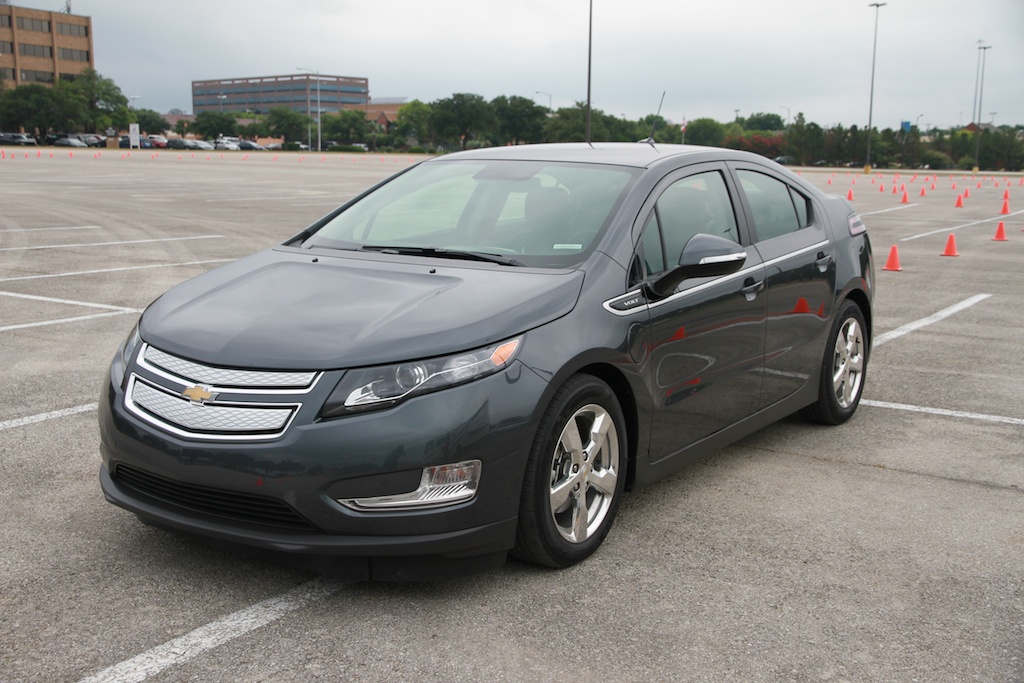 Chevrolet is touring the country with the Volt, inviting journalists to drive the car in an autocross environment (something about it “not being good for prototypes to be seen on real roads”). Naturally, when the tour came to Austin, I went over to a local mall to pilot the Volt and ponder its future.

You can tell three stories about the Volt. The first is that is it an engineering marvel, which it is. The Volt is likely to be the first range-extended EV to go into mass production (Fisker would be the other contender, and the “mass” element may be missing). To get there, GM had to make a good EV, which entails the development of a variety of subsystems (AC, heat, radio, etc) that are more efficient than normal and are designed for EV use. Conventional hybrids don’t have to do this because they can throw gasoline at the problem. The Tesla Roadster doesn’t do this either, for the most part, it just uses a massive battery ($$$) and low weight. The Nissan Leaf will have to take the better sub-systems approach, but it doesn’t have a range-extender, so the problem is simpler. So, yes, the Volt is an engineering achievement.

Unfortunately for GM, a) I’m not sure that many people will recognize this and b) I suspect fewer people will care. Too bad, because GM is showing some serious engineering prowess here and it is aimed in the right direction given that range-extended EVs will be a major part of the automotive landscape in the medium-term.

The second story you can tell about the Volt is that it is a pretty good car. The Volt suspension is on the soft side, but lots of anti-roll has been dialed in, so body roll is kept in check. The Volt feels like it wants to understeer, but this feeling isn’t overwhelming and this is typical of other small luxury sedans. Basically, the Volt handles pretty well. The tuning means it doesn’t feel as light or agile as a car as enthusiasts would like, and the steering is a little too slow and vague to make it seem really responsive, but it isn’t bad at all.

Power delivery, naturally, does differ from internal combustion cars. Torque from electric motors is maximized at low rpm, so the Volt gets off the line and moves from 10-40 mph pretty quickly and responsively. It lacks the “Woah!” factor of the Tesla, but for people used to I-4s and V-6s hooked up to an automatic transmission, the Volt drivetrain is a big step forward in urban driving. The Volt offers more kick at low rpm than most small sedans, delivering much of the quality that some people love in a diesel.

The Volt drivetrain is also quiet, though you do notice more road-induced noises so it certainly doesn’t seem “tomb-like”. On the subject of noise, when the gasoline engine/generator on board kicks in to re-charge the batteries the sound is noticeable but not too intrusive (and yes, the engine/generator does recharge the batteries rather than powering the electric motors directly because of Federal rules regarding how the Volt is classified). In an effort to make the Volt’s range extender feel more normal, Chevrolet has made some attempt to have engine revs rise and fall with throttle position (ideally, the engine would run at a constant high rpm for maximum efficiency). I found this feature somewhat artificial because of the lags involved (especially when transitioning to throttle off).

I like the Volt’s hatchback sedan idea, because you get some of the practicality of a wagon with the look of a sedan. The Volt’s resulting storage area, with seats folded down, is generously sized, and with the seats up there is still ample luggage capacity. The back seat room is just adequate for my six-foot height. Like many small sedans, the Volt has a rather narrow opening between the seat and the B pillar; once inside, legroom is enough but no more. Headroom seems slightly tight, again, as it is with many small sedans.

So, you could think of the Volt as being a bit like a BMW 328i sedan, with a hatchback—essentially the form factor on offer here. The 328i is a very successful car in the sub-$40K class, and is a benchmark car in that class in terms of driving dynamics and ride/handling balance. Well, the Volt gives up some of the BMW’s handling and gains some low-end grunt, which is a pretty respectable performance.

The third story you can tell about the Volt comes from the “close but no cigar” annals: you could say the Volt isn’t good enough to really register with consumers. The idea here is that the Volt needs to be something really special to overcome the drag that being from the GM stable places on any car. After all, they’re paying about $40K (or about $32,500 after federal tax credits) and for that coinage, you’re shopping for something special. I don’t see any reason why the Volt couldn’t have been that car, but the fact is, it isn’t.

Without belaboring the point, here is a list of “little” things that make the Volt un-special:

Note that addressing these issues would not have required physics to be altered or new technology to be invented. As I said above, the Volt is technologically pretty good.

So, in a way, the Volt may have to win on gas mileage. I forced the Volt into Mountain mode for part of my drive so that the gas engine would kick in, and I still got 112 mpg. Once we get to triple digit numbers, it does seem impressive. At $3 per gallon, the cost math isn’t really there to justify the Volt versus a Prius or a Nissan Versa, but it does seem cool.

I want to like the Volt. I sort of do like the Volt (I like auto tech). But in my heart of hearts, I know a Cadillac version can’t come fast enough.