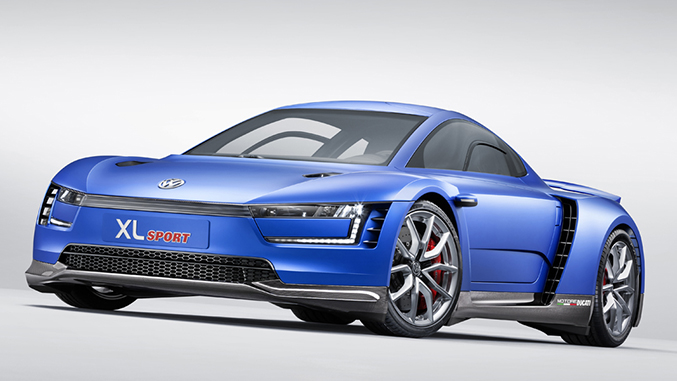 VW appears to be taking a page out of the playbook of sports racers like the Radical SR3 and the open wheeled Formula 1000 series at this year’s Paris Auto Show with the debut of the XL Sport. Taking the architecture of the low drag, light weight XL1, the XL Sport ditches the XL1’s diesel-electric hybrid powertrain in favor of a 1198cc, 197 horsepower twin cylinder mill taken from the Ducati 1199 Superleggera sport bike and places it in the middle of the chassis, creating a sports car that revs to 11,000 rpm with a top speed of 168 miles per hour.

With power channeled through VW’s seven-speed DSG transmission, the XL Sport hits 62 mph from rest in 5.7 seconds. The new car features a 0.258 coefficient of drag which, despite being less aerodynamic than the ultra-efficient XL1 (at 0.189), gives the XL Sport better aerodynamics than any other sports car, according to VW.
That compromise in aerodynamics versus the XL1 should be taken as a negative though, as the XL Sport features wider tires, additional cooling ducts, and increased downforce to match the vehicle’s high performance capabilities.
The XL Sport also boasts a body made from carbon fiber and a chassis which incorporates high-strength steel subframes. Forged magnesium-alloy wheels are fitted with 205/40 R18 front and 265/35 R18 rear high-performance tires, and a ceramic brake disc setup provides the necessary stopping power.