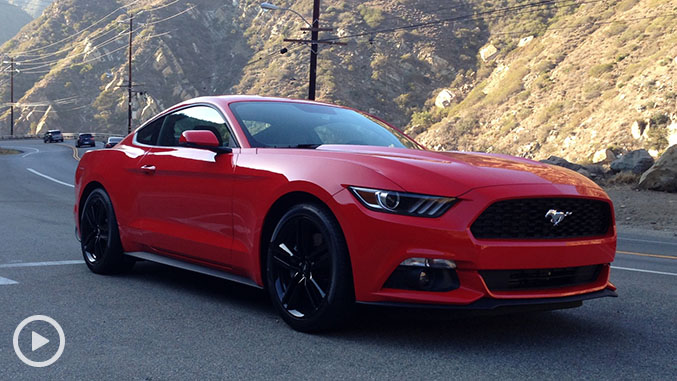 While we had a great time putting the new GT through its paces, perhaps the biggest surprise of during our stint with the all-new Mustang lineup was the new EcoBoost model. Slotted between the base V6 and the 5.0-powered GT, the EcoBoost Mustang gets motivation from a turbocharged, DOHC 2.3-liter four cylinder motor which outputs an impressive 310 horsepower and 320 pound-feet of torque, recalling the short-lived Mustang SVO of the early 1980s which still carries a cult following today for its light weight and eminently tunable turbocharged powerplant. Our tester was also equipped with a six speed manual and the optional Performance Package, which includes a 3.55 limited slip differential and 255/40R19 summer tires.
The EcoBoost equipped 2015 Mustang weighs in at approximately 3550 pounds and is capable of getting to 60 mph from rest in 5.6 seconds, and stopping from 60 mph in about 106 feet. It also sounds pretty good while doing it, though we later discovered that those Subaru-esque sounds we were hearing in the cabin were actually not coming from the motor. Despite this minor transgression, the new four pot Mustang raised more than a few eyebrows with its linear power delivery and overall fun-to-drive demeanor. Let’s take it for a spin:
Have you subscribed to the Winding Road Magazine YouTube channel yet? We post new videos like these every week, so give a us click if you want to make sure you don’t miss any of the latest clips.
Tags:
ecoboostFordMustangPOV car video