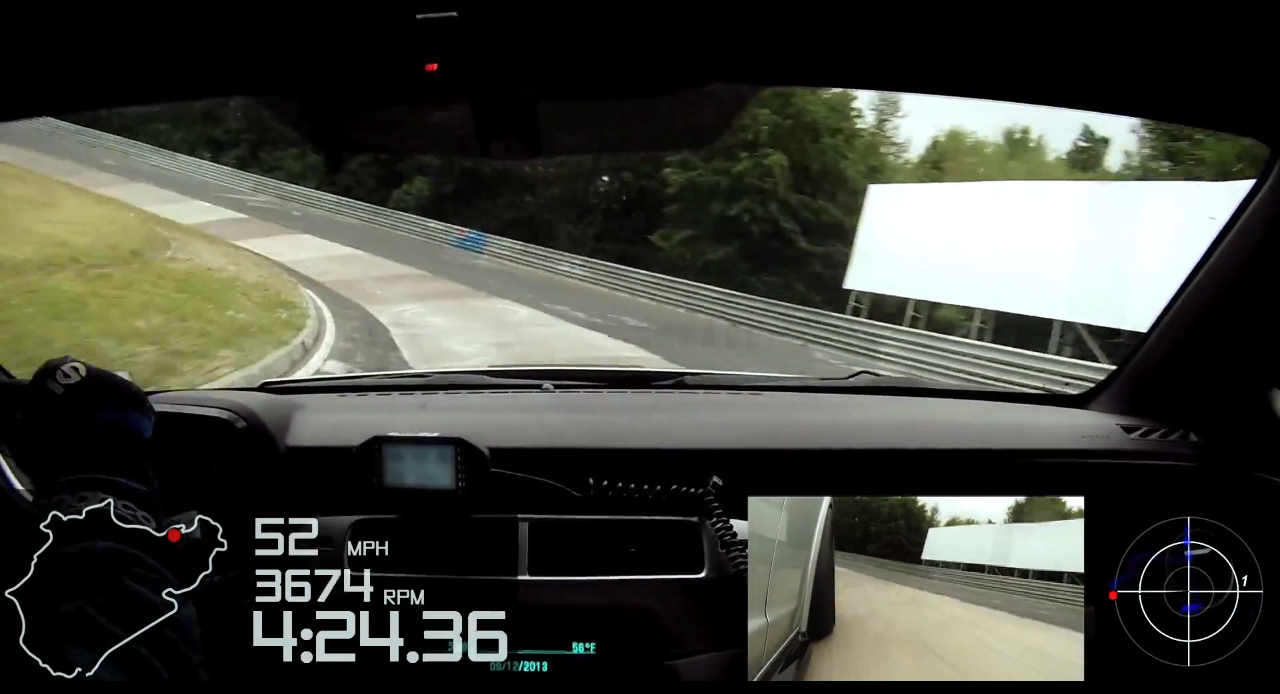 Chevrolet has published a video of the 2014 Camaro Z/28 lapping the infamous Nürburgring in 7:37.40 as part of 10 hours and 1000 miles of testing over the course of a week. That’s faster than the Lexus LFA, Ferrari 430 Scuderia, and Chevy’s own C6 Corvette ZR1. And this was in semi-wet conditions.
Camaro’s chief engineer, Al Oppenheiser, says that data suggests the Z/28 could be up to six seconds faster with ideal track conditions. (That would place it ahead of the Ferrari 458 Italia.)
Other telemetry gathered from the test shows the Camaro Z/28 being capable of 1.08 lateral g force, and 1.5 g in deceleration (thanks to the Brembo carbon-ceramic brakes).
The Camaro will undergo a total of 24 hours of testing to simulate a year of competition, in order to make sure it can stand up to the rigors of real-world racing. Only brakes and tires are replaced throughout the test, and no other mechanical changes are allowed.
The Camaro Z/28 is powered by a LS7 7.0-liter V-8, providing 505 horsepower and 481 pound-feet of torque.
See the 7:37.40 Nürburgring lap in the video below. Visit the Z/28’s Master Landing Page for more information. Scroll past the video for the press release from Chevrolet.
Track-capable Camaro Z/28 Validated at Nürburgring
DETROIT – Chevrolet today revealed a video of the all-new, 2014 Camaro Z/28 lapping Germany’s challenging Nürburgring road course in 7:37.40, a time comparable with some of the world’s most prestigious sports cars.
The Z/28’s lap is four seconds faster than the Camaro ZL1, and beats published times for the Porsche 911 Carrera S and the Lamborghini Murcielago LP640. The Z/28’s lap was completed on less-than-ideal conditions, with damp pavement and pouring rain near the end of the run.
"One of the challenges of testing at the ‘Ring is that the track is so long that conditions can change radically in a single lap," said Al Oppenheiser, Camaro chief engineer. "Adam Dean, the development driver for Z/28, did a heroic job driving in deteriorating conditions. Based on telemetry data from our test sessions, we know the Z/28 can be as much as six seconds faster on a dry track."
In terms of lap times, the Z/28’s improved speed came from three areas:
The heart of the Z/28 is the 7.0L LS7 engine. The LS7 uses lightweight, racing-proven, high-performance components, such as titanium intake valves and connecting rods, CNC-ported aluminum cylinder heads and a forged-steel crankshaft to help produce an SAE-certified 505 horsepower (376 kW) and 481 lb-ft of torque (652 Nm). Air-conditioning is available, but only as an option.
A close-ratio six-speed manual transmission is the only transmission offered and power is distributed to the rear wheels via a limited-slip differential featuring a helical gear set, rather than traditional clutch packs. The new design enables the driver to apply more power and get through corners faster, by making the most of the capability of individual-wheel antilock brake function during corner entry braking, mid-corner speed and corner-exit traction.
The team spent a week at the Nürburgring as part of the Z/28’s performance-validation regimen, accumulating a total of 10 hours and nearly 1,000 miles on the track. Each lap took less than eight minutes to complete, despite having to overtake slower traffic at times. These hours are part of the grueling 24-Hour Test, which simulates a full year’s worth of track use of track days or amateur-level competition at the hands of an owner.
“Passing the 24-Hour Test is a requirement for all cars we call ‘track capable,’” said Wayne McConnell, director of global vehicle performance. "The test pushes the car at 10/10ths on the track for a total of 24 hours. During the test the only mechanical changes allowed are replacing the brakes and tires.”
The 24-Hour Test is broken into a number of segments over the course of several days – and even at different tracks – to evaluate performance in precisely measured and carefully monitored increments. Crucially, each valid test lap must be run within 2 percent of a target lap speed to count toward the 24-hour total.
The 24-Hour Test was first used in the early 1990s for the fourth-generation Corvette. Back then, the 300-horsepower Corvette was Chevrolet’s most powerful vehicle, and the 24-Hour Test measured 15 channels of data. Today, the 2014 Camaro LS offers a 323-horsepower V-6, while the Camaro Z/28’s racing-proven LS7 7.0L small-block V-8 delivers 505 horsepower, and the 24-Hour Test measures 130 channels of data.
“Our cars’ performance and capability have advanced tremendously in the past 20 years, which required us to continually improve the parameters of the 24-Hour Test," said McConnell.
"Today’s test pushes the car harder than the vast majority of customers ever will. As a result, when we call a car ‘track capable’ we are confident that it will perform reliably and consistently for our customers.”
Tags:
chief engineerItaliaLamborghini