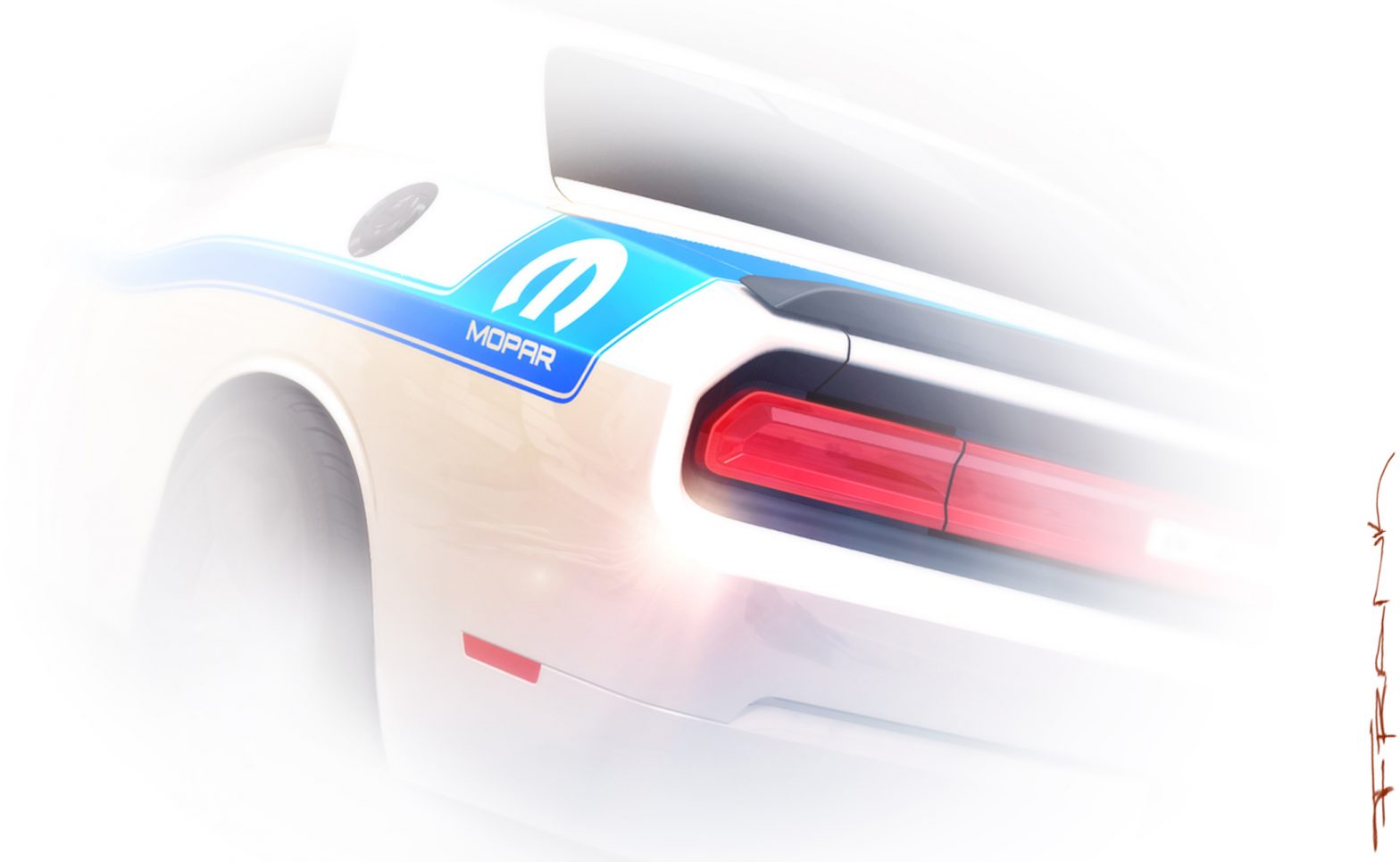 Chrysler is teasing the Mopar ’14 car it will be presenting at the SEMA show in Las Vegas next month. This year, Mopar will be giving its annual treatment to the Dodge (or SRT?) Challenger.
Chrysler Group is staying tight-lipped concerning the details of the Mopar ’14 Challenger, but says that the car will be one of 20 customized vehicles on display in Sin City.
We can see some of the aesthetic treatment in the sole accompanying photo, but we can guess Mopar has dug deep into its catalog of parts to do some performance tweakage to the modified Challenger. Previous Mopar cars have featured upgraded suspensions, exhausts, brakes, steering, and even a different final drive ratio in the Mopar ’11 Charger. We’re hoping this year’s candidate will be tuned with the track in mind. After all, Mopar promises it will “instantly resonate with enthusiasts.”
Scroll down for more information in the press release, below.
Chrysler Group LLC Gives Sneak Peek of New Mopar ‘14
October 16, 2013 , Auburn Hills, Mich. – Chrysler Group LLC today released an image of its new limited-edition Mopar ’14, which will debut at next month’s Specialty Equipment Market Association (SEMA) show in Las Vegas.

The new Mopar ’14 will be one of 20 customized vehicles on display in the brand’s 15,300 square-foot exhibit. The limited-edition vehicle follows the Mopar ’10 Challenger, Mopar ’11 Charger, Mopar ’12 300, and Mopar ’13 Dart. In addition to custom vehicles, the brand will showcase new Jeep® Performance Parts from its newly created Mopar Off-Road Division. The SEMA Show runs Nov. 5-8 at the Las Vegas Convention Center.

Mopar has introduced numerous industry-first features including:
More than 75 Years of Mopar
Mopar (a simple contraction of the words Motor and PARts) was trademarked for antifreeze product in 1937. The Mopar brand made its mark in the 1960s – the muscle-car era. The former Chrysler Corporation built race-ready Dodge and Plymouth “package cars” equipped with special high-performance parts. Mopar carried a line of “special parts” for super-stock drag racers and developed its racing parts division called Mopar Performance Parts to enhance speed and handling for both road and racing use. The brand has expanded to include technical service and customer support.
Tags:
ChallengerChargerChrysler Group LLCFIAT SpALas VegasMichiganMoparSpecialty Equipment Market Association