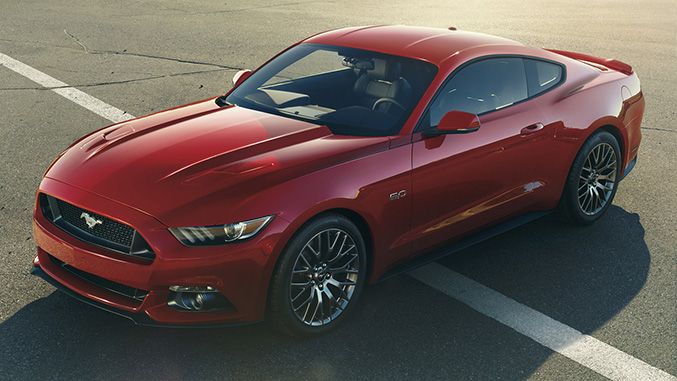 The pony car wars show no signs of letting up any time soon. While the new Dodge Challenger, and particularly the 707hp Hellcat variant, have been stealing the limelight as of late, Ford has just announced the official specifications and output figures for its all-new Mustang, which is set to hit showrooms later this year.
As the Mustang moves up the ladder in terms of refinement, both through more standard content and its long-awaited move to a fully independent rear suspension from the solid-axle design that’s been a staple of Mustangs since the car debuted in 1964, many have worried that the car would gain quite a bit of weight for the 2015 model year.
It’s true that the Mustang has packed on a few pounds, but thankfully the numbers revealed are small enough to be largely negligible. The base Mustang, equipped with the V6 – which now outputs 300 horsepower, strangely down 5hp from last year’s model – with the automatic transmission weighs just 12 pounds more than the outgoing model at 3530 pounds, while the biggest weight gains are seen in the GT model, up 87 pounds to 3705 when equipped with the manual transmission, or 3729 with the automatic gearbox, there a gain of 54 pounds.

While weight gain in performance vehicles is rarely a welcome sign, Ford points out that the power-to-weight ratios actually improve for 2015, albeit by a rather small amount. The 5.0-liter V8 in the Mustang GT is now officially rated at 435 horsepower and 400lb-ft of torque, up 15 ponies and 10 pound-feet from the 2014 model, and should make the Mustang’s minimal weight gain largely unnoticeable. The 2.3-liter turbocharged EcoBoost four cylinder engine, a new offering for 2015 and the first time a turbo has been installed by the factory in a Mustang since 1986, officially outputs 310 horsepower and 320lb-ft of torque, slotting it in between the base V6 model and the GT in the Mustang portfolio.