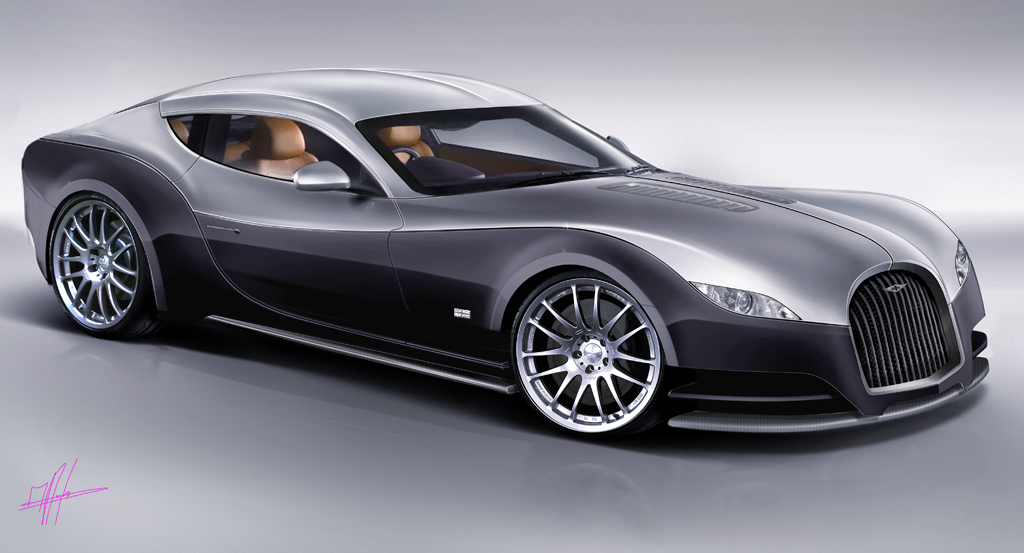 The Pebble Beach Concours d’Elegance is one of the most prestigious automotive events of the year, and is drawing the attention of more and more high-end manufacturers. Count Morgan among them, as the company has just debuted the stunning EvaGT 2+2.

The proportions of the EvaGT are classic Morgan, but the rest of the design is a significant departure from the brand’s last new model, the Aero Supersports. The flowing lines of this new model are accentuated by flush door handles, hidden wipers, and an overall design that emphasizes aerodynamics. The two-tone paint job doesn’t look bad either.

Under the skin, the EvaGT receives an upgraded version of the bonded-aluminum chassis that underpins the Supersports. The turbocharged, 3.0-liter inline-six from the BMW 335i sits under the sculpted hood and produces a healthy 306 horsepower and 295 pound-feet of torque. Power is transmitted to the rear wheels by either a six-speed automatic or six-speed manual. Morgan expects a scamper to 62 miles per hour to take 4.5 seconds and a top speed of 170 miles per hour.

If you want one, act quickly as Morgan is limiting production to 100 units and requiring a deposit of £5000 ($7814 at current exchange rates). Production is expected to begin in mid 2012.

Please scroll down for the official press release from Morgan.

* How to order your Morgan EvaGT

Order your MorganEvaGT or register your interest by downloading the Reservation Form at the foot of this page.

At a time of global conservation with a drive towards improved fuel economy the Morgan Motor Company introduces a new concept for a sporting family, the Morgan EvaGT. The four seater Coupe takes its inspiration from the British sports saloons of the early 1950’s. Among these were the Bristol 400 series and the Frazer Nash BMW 328. After the Second World War rationing forced designers to conserve and make the most of the materials at their disposal. However the pressure cooker of war had also led to an abundance of innovative engineering ideas. Steel was scarce so lightweight aluminium was used for bodywork. Smooth "in-line" straight six cylinder engines were fitted to give long distance comfort and reliability. Because the engineers had often worked on aircraft development during the war aerodynamics contributed to high but economical cruising speeds.

The Morgan Motor Company is the last survivor of these British sports car manufacturers. Of course the company is lucky enough to have 100 years of continuous success behind it and like Bristol and Frazer Nash; Morgan has a history of successful collaborations with German suppliers BMW, Siemens and Bosch. But Morgan also works with a number of young engineering companies in the United Kingdom and with world class British university research departments.

The new challenge is to make cars that are more efficient than any we have seen so far. The Morgan Motor Company is in a good position to respond to this challenge because the company is small and flexible with a proven track record of fast development cycles. It currently manufactures one of the greenest sports cars in the world, the Morgan Four Four Sport. Morgan achieves this result with the use of the new Ford 1.6 Sigma engine coupled with a light chassis. Morgan currently has a young well qualified technical team working towards a potential 5 engineering PHD’s, who will make full use of research departments at the University of Oxford, Cranfield and Birmingham City to tap into a technical knowledge network to make more efficient cars. This team is helping to develop a high torque electric motor twice as powerful as others of the same weight and size and a powerful lithium phosphate battery with a higher charge density to achieve the most efficient performance for weight so far.

The dynamic team at Morgan has made a commitment from 2010 that they will bring out a new model every two years. The legendary sports car manufacturer will target new niches…..electric sports cars, a fun weekend vehicle and the first of the new cars will be the Morgan EvaGT, a four seater Coupe aimed at young families, with a bit of drama or automotive theatre as we like to call it. This is a revolution for a car company famous for making the same car for 50 years!

Chassis:
The Morgan EvaGT makes full use of clever technologies that the Morgan Motor Company has developed to manufacture a lightweight car. Morgan was one of the first car companies to see the advantage of a bonded aluminium chassis to give rigidity but also to save weight. The EvaGT uses a further developed version of the bonded aluminium chassis of the Morgan Aero SuperSports, a chassis that successfully competes in International GT3 Sports Car Racing. Compliant with European and US safety approvals.

Bodywork:
Morgan was the first car company in 1995 to see the benefit of superformed aluminium, an aircraft technology, to manufacture smooth accurate body parts. Morgan Design have sculpted a new shape for the Morgan EvaGT that focuses on natural materials and understands their unique technical properties. Using computer technology in design and in manufacture to ensure accuracy, the parts are then hand finished to make sure they feel as good as they look. A perfect "A" class surface, minimal shut lines, hidden wipers, flush door handles and sharp creases deflect air over the surface of the car. The new Morgan EvaGT represents a philosophy of lightweight luxury that embraces authenticity, sustainability and innovation achieving its final result through the process of skilled craftsmanship.

Launch
The first public view of the Morgan EvaGT will be at the 60th Pebble Beach Concours d’Elegance, California, USA on the 15th August 2010.

The Morgan Motor Company will be taking orders worldwide with a request for a deposit of £5000 from prospective clients for an allocated build slot. The first 100 cars of a limited run are planned to begin production mid 2012 and the "on-road" price will be competitive for a car of this class.

Lotus To Reveal New Versions Of Evora In Paris