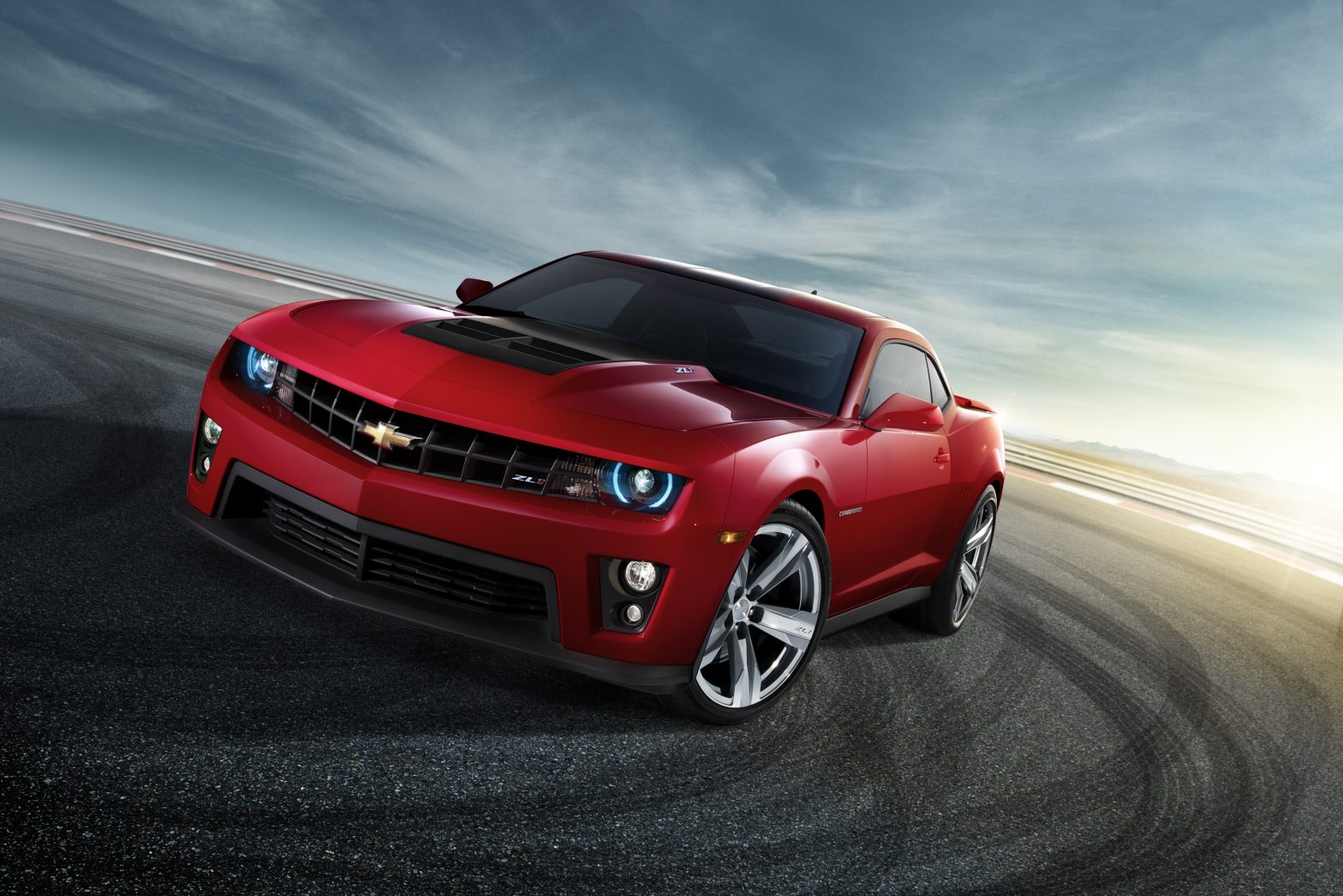 Today, in the Windy City, Chevrolet debuted the 2012 Camaro ZL1, powered by a blown 6.2-liter LSA engine, and featuring some new technology for this beloved muscle car.

Its supercharged V-8 makes approximately 550 horsepower and 550 pound-feet of torque. The six-speed manual with twin-disc clutch features a short-throw shifter, which should have the enthusiasts excited. The dual-mode exhaust, borrowed from the Chevrolet Corvette, is tuned specifically to give the Camaro ZL1 a unique sound.

The ZL1 also features GM’s Magnetic Ride Control with Tour and Sport modes, which can adapt for casual or harder driving at the driver’s command. The car’s twenty-inch forged aluminum wheels are wrapped in Goodyear Supercar F2 tired that were made specifically for the ZL1. On hand to slow the car are track-ready Brembo brakes. Even the drivetrain is upgraded, with a stronger driveshaft and rear axle and heavy-duty limited-slip differential.

The ZL1 has a unique look, too, with a revised fascia and a raised carbon fiber insert on the hood. Aerodynamic touches, such as brake cooling ducts up front, air extractors on the hood, and a rear spoiler and diffuser are at the same time functional and visually unique. Inside the car, the driver is treated to a black interior with microsuede seat inserts, embroidered ZL1 logos on the headrests, a redesigned steering wheel, alloy pedals, and a heads-up display with performance readouts.

Expect the 2012 Chevrolet Camaro ZL1 to launch early next year.

Scroll down for all the details and specifications in the official press release.

CHICAGO – The 2012 Chevrolet Camaro ZL1 debuted today at the Chicago Auto Show. It is the highest-performing Camaro and the most technically advanced car ever developed in its class. The new ZL1 continues the momentum of Camaro, propelling it into an entirely new realm of leading-edge performance technology. It is planned to launch at the beginning of 2012.

Motivated by a supercharged V-8 engine producing an estimated 550 horsepower (410 kW), the Camaro ZL1 will be the fastest Camaro ever offered by Chevrolet. And more than just power, the ZL1 features technologically advanced and highly developed chassis and suspension systems that help it deliver balanced, track-ready handling and braking power to complement its high engine output. Rigorous development of the ZL1 is ongoing, and official estimates of the car’s capabilities will be released later in 2011, as testing nears completion.

“Camaro ZL1 is about high-tech performance and design, and is a type of car no one has ever brought to this segment previously,” said Rick Scheidt, vice president of Chevrolet marketing. “It’s the most technically advanced Camaro ever, so we’ve chosen a name from the most elite and exclusive Camaro in history.”

The ZL1 name is derived from the all-aluminum racing engine of the same name, which was developed in the late 1960s and installed into a handful of regular-production 1969 Camaros. Only 69 were built with the engine, but they’ve achieved mythical status among enthusiasts, as they represented the pinnacle in Camaro performance – until now. The 2012 ZL1 model is designed to be a major leap forward for the Camaro, bringing a new level of performance capability to the segment.

The central goal of the car’s development was creating something new – a Camaro intended to reach optimal lap times on top road-racing circuits and excellent driving dynamics on the street. To achieve that goal, engineers evolved many of the existing Camaro’s systems, as well as incorporated new technologies such as electric power steering and Magnetic Ride Control, the world’s fastest-reacting suspension system.

Camaro ZL1’s design communicates and supports its performance mission. Rather than using decorative elements, ZL1 is visually differentiated from other current Camaro models with elements vital to the car’s elevated capabilities.

“Everything about the ZL1’s design is directly related to its technology and serious performance, especially aerodynamics,” said Ed Welburn, vice president, Global Design. “Our designers’ goal was to execute that function-oriented design with beautifully sculpted forms, creating an imposing, powerful persona. Function becomes the aesthetic. The intent is a car that delivers on the attitude it projects.”

Major elements of the ZL1’s design are a new front fascia and hood with air extractors, designed in tandem to create aerodynamic downforce to aid handling. The car’s hood includes a signature center section constructed of carbon fiber and rendered in satin black finish. New rocker panels, wide tires, 20-inch wheels and exhaust tips portray the car’s handling and power.
The ZL1 badge appears on the grille, hood and the brake calipers, all key areas portraying the technology within.

Tech overview
Supporting the dynamic track and street performance of the ZL1 is the LSA 6.2L supercharged engine, which will produce an estimated 550 horsepower (410kW) and 550 lb.-ft. of torque (677 Nm), with specific features for the Camaro. Built on GM’s legendary all-aluminum, small-block V-8 architecture, the LSA features an intercooled supercharger system, premium heat-resistant aluminum-alloy cylinder heads and other details designed to ensure its exceptional performance is delivered with smoothness and refinement. Components and design elements that contribute to the LSA’s performance include:

Camaro ZL1 is a complete high-performance car, not just a Camaro with more power. Key technical highlights include:

Transmission – The high-performance Tremec TR-6060 six-speed manual is matched with the LSA engine. It is the “MG9” version of the transmission, with a higher torque capacity. It is used with a dual-mass flywheel and twin-disc clutch for easy operation and shift smoothness. A new, shorter-throw shifter actuates the gear changes.

Exhaust – ZL1 is equipped with a dual-mode exhaust system, which alters the sound level and character in response to engine rpm. First used on the legendary Corvette, and specifically tuned for Camaro ZL1, the dual-mode exhaust will give the car a signature sound.

Drivetrain – It is revised with a stronger driveshaft and rear axle system, featuring a larger and stronger cast iron differential housing, stronger axles and heavy-duty limited-slip differential. This patent-pending system is designed to ensure that ZL1’s tremendous power is delivered smoothly to the ground.

Suspension – The suspension features completely revised tuning and the inclusion of segment-exclusive Magnetic Ride Control. ZL1’s Magnetic Ride system will include driver selectable modes (Tour and Sport) tailored for the preferred style of driving. It uses advanced magneto-rheological science to produce shock damping with the highest level of precision, enabling body control optimized for excellent performance in everyday driving as well as track situations. This technology appears on only a small roster of some of the world’s finest performance cars. Other chassis elements are redesigned to support the car’s high-performance limits. Rear stabilizer bars have drop links repositioned outboard of the control arms. This makes the bars more effective in controlling body roll in turns, with crisp response to driver commands.

Brakes and Steering – Camaro ZL1 features an advanced track-capable braking system, developed in conjunction with experts from Brembo. The large 14.6-inch (370 mm) two-piece front rotors have six-piston calipers; the 14.4-inch (365 mm) rear rotors have four-piston calipers. ZL1 marks the entry of a new electric power steering system to Camaro. It is being developed to ensure precise control and feedback to the driver, with greater variability of effort for high-performance driving.

Exterior – ZL1’s signature from the front is the redesigned fascia and aluminum hood with a raised, carbon fiber insert. The fascia includes a front splitter and new vertical fog lamps. The fog lamp area includes air intakes designed for brake cooling. The hood features front-mounted air extractors that direct air precisely over the car. Visually, this center section, in satin black carbon fiber, communicates the car’s high-performance intent as a visual contrast to the car’s exterior color. Functionally, the air extractor is a key in connecting airflow closely to the bodywork, creating aerodynamic downforce. The carbon fiber center section reduces the mass of the hood.  High-intensity discharge (HID) headlamps and fog lamps are standard. The rear of the car includes a diffuser and spoiler, also functional elements that enhance the car’s aerodynamics.

Wheels and Tires – New-design, 20-inch forged aluminum wheels, which are lighter than the 20-inch wheels used on the Camaro SS, are used with new Goodyear Supercar F2 ties developed specifically for the ZL1.

Production details
All of the Camaro exterior colors will be offered with the ZL1, but black is the only interior color. The unique exterior features are complemented with a black center section on the hood. Inside, the Camaro ZL1 has heated leather seats with microfiber inserts and ZL1 logos embroidered on the front headrests. Microfiber suede is repeated as an accent on the instrument panel, adding a richer look to the interior. The ZL1 will include the same content as the current 2SS package and include the following new or unique features:

Engineers have already driven Camaro ZL1 prototypes extensively at demanding road courses in the U.S. and Germany, with final testing being completed through the balance of 2011.

About Chevrolet
Founded in Detroit in 1911, Chevrolet celebrates its centennial as a global automotive brand with annual sales of about 4.25 million vehicles in more than 140 countries. Chevrolet provides consumers with fuel-efficient, safe and reliable vehicles that deliver high quality, expressive design, spirited performance and value. The Chevrolet portfolio includes iconic performance cars such as Corvette and Camaro; dependable, long-lasting pickups and SUVs such as Silverado and Suburban; and award-winning passenger cars and crossovers such as Spark, Cruze, Malibu, Equinox and Traverse. Chevrolet also offers “gas-friendly to gas-free" solutions including Cruze Eco and Volt. Cruze Eco offers 42 mpg highway while Volt offers 35 miles of electric, gasoline-free driving and an additional 344 miles of extended range. Most new Chevrolet models offer OnStar safety, security and convenience technologies including OnStar Hands-Free Calling, Automatic Crash Response and Stolen Vehicle Slowdown. More information regarding Chevrolet models can be found at www.chevrolet.com

Note:  Information shown is current at time of publication.