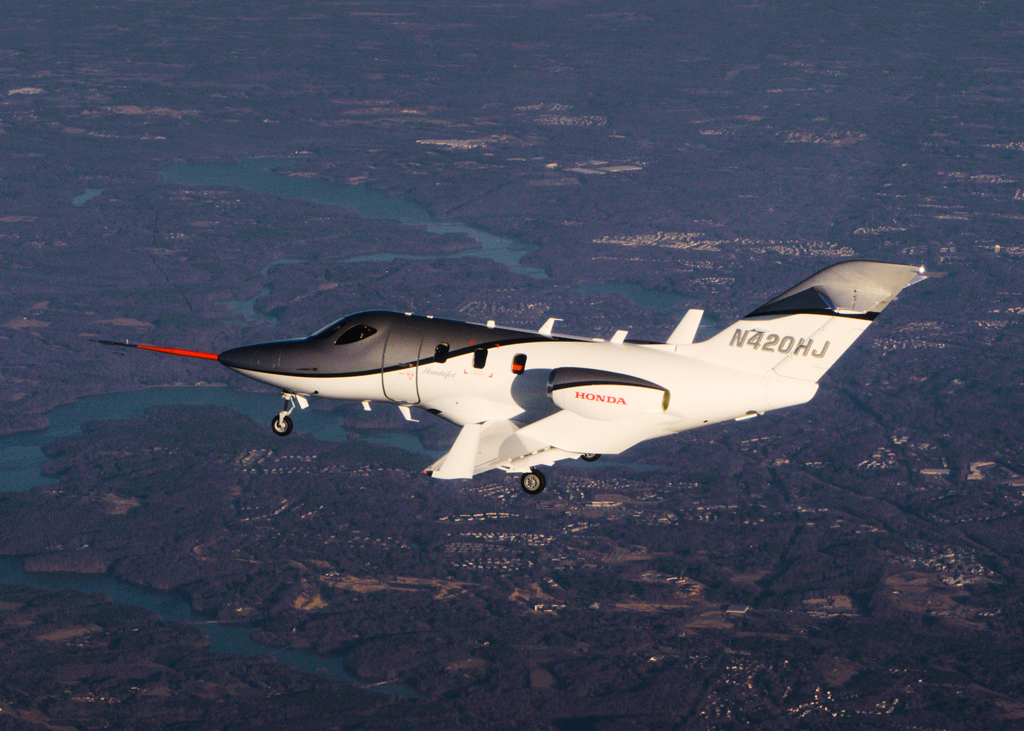 Honda has had its first official flight of the FAA-approved HondaJet. The new light business jet took off from the Honda Aircraft Company’s headquarters at Piedmont Triad International Airport in Piedmont, North Carolina Monday afternoon. The goal of the 51-minute flight was to assess flight characteristics and gather performance data.

With over 100 orders for the $4.5 million aircraft, the HondaJet represents Honda’s first foray into the aerospace industry. Power for the HondaJet comes from a pair of GE Honda HF120 turbofan jet engines, mounted over the wings in order to reduce detectable ground noise, increase fuel efficiency and performance, lower aerodynamic drag, and increase overall cabin space. Pilots will enjoy an all-glass avionics system, which features three 14-inch screens and dual touch-screen controllers.
Honda plans on producing five FAA-approved aircraft for mechanical, structural, and flight testing purposes. A 266,000 square foot production facility is scheduled for completion in early 2011 with production of the jet starting in 2012.
The HondaJet took its first experimental flight in 2003. It followed that test flight with its public debut in 2005 at the Experimental Aircraft Associations AirVenture 2005 in Oshkosh, Wisconsin. Honda Aircraft was formed in 2006 with the goal of completing certification and testing by 2010, and beginning sales shortly after.
Please scroll down for the official press release from Honda.
Honda Achieves First Flight of FAA-Conforming HondaJet
Honda Aircraft Company, Inc., today announced that it has successfully completed the first flight of its FAA-conforming HondaJet advanced light business jet. The event is a significant step in Honda’s aerospace program leading to delivery of aircraft in 2012.
The first conforming HondaJet lifted off yesterday, December 20, 2010, at 15:31 EST from Honda Aircraft Company’s world headquarters facility at the Piedmont Triad International Airport in Greensboro, North Carolina. The HondaJet remained aloft for 51 minutes, during which time the aircraft’s flight characteristics and performance were analyzed and systems checks were conducted. Various test data gathered during the flight were transmitted real-time to Honda’s flight test telemetry operations base within the company’s world headquarters facility.
"This is a very important milestone for the HondaJet program," said Michimasa Fujino, Honda Aircraft Company President and CEO. "This aircraft was assembled and tested under strict FAA certification processes, and we are very pleased to have achieved this successful first flight. Our team has worked extremely hard to reach this critical step in the HondaJet program, and these results reflect Honda’s focus and determination to develop a class-leading aircraft."
"We are very encouraged by our initial review of the flight data, which indicates the conforming HondaJet performed as expected. As we move forward, we will continue to focus all of our efforts and energy to deliver to our customers the most advanced light business jet yet created," said Fujino.
To support the company’s certification program, Honda has completed its second FAA-conforming aircraft, which already has undergone numerous structural tests required for commencement of certification flight testing. Honda also has completed mating of main assemblies for its third FAA-conforming aircraft, which is now in the systems installation phase of completion. This third conforming aircraft, to be used mainly for mechanical systems flight testing, is scheduled to be completed in early 2011. A total of five FAA-conforming aircraft, including one additional flight test aircraft and one additional structural test aircraft, are planned to support the HondaJet certification program.
While Honda enters the flight test program with its conforming HondaJet, the company also nears completion of its aircraft production facility on its Greensboro campus. The 266,000 ft2 HondaJet production facility is scheduled for completion in early 2011, with the final phase of interior build-out now underway. Upon completion of the production facility, Honda will begin the process of moving equipment and personnel into the facility and undertaking pre-production preparations and training necessary to support HondaJet production ramp-up beginning in 2012.
About HondaJet
Honda Aircraft Company, Inc., a wholly owned subsidiary of Honda Motor Company, Ltd., has amassed orders for well over 100 HondaJet advanced light business jets. Scheduled for first delivery in the third quarter of 2012, the $4.5 million HondaJet is Honda’s first-ever commercial aircraft and lives up to the company’s reputation for dynamic performance together with superior efficiency. The HondaJet proof-of-concept aircraft has accumulated more than 500 flight test hours and attained both a top speed of 420 knots (483 mph) and a maximum altitude of 43,000 ft. in flight testing.
The HondaJet incorporates many innovative technological advances in aviation design, including a unique over-the-wing engine-mount configuration that dramatically improves aircraft performance and fuel efficiency by significantly reducing aerodynamic drag in flight. This innovative approach to airframe design also lowers ground-detected noise when overhead and allows for a more spacious cabin and greater cargo capacity. The HondaJet is powered by two highly fuel-efficient GE Honda HF120 turbofan jet engines.
The production HondaJet flight deck features a Honda-customized Garmin® G3000 next-generation all-glass avionics system incorporating a class-leading layout with three 14-inch landscape-format displays and dual touch-screen controllers for overall avionics control and flight plan entries. The HondaJet Avionics Suite is the most advanced glass flight deck available in any light business jet and provides state-of-the-art integrated avionics functionality featuring split screen MFD capability, satellite weather, graphical synoptics, digital audio, and optional Synthetic Vision.
Learn more about HondaJet at www.hondajet.com.
Tags:
AirplaneHondaHonda Aircraft CompanyHondaJetJet