The Taxonomy of Vintage Racing 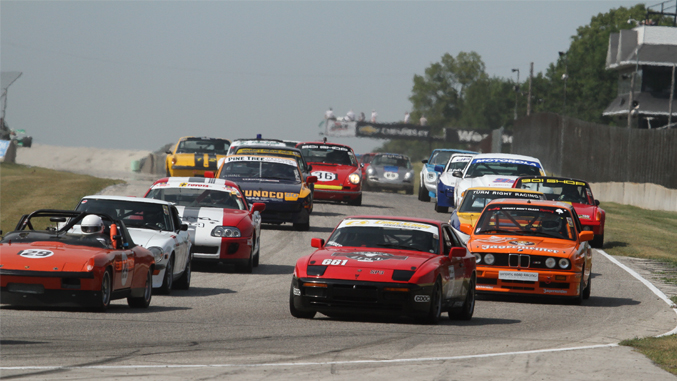 Vintage racing has a wonderful scene, with lots of cars, including some really interesting cars, spectators, pageantry, parties and even a little racing. That last part can be somewhat confusing for prospective vintage drives because the rules are complex and incomplete, which is to say there are some unwritten rules. As we've said before, the unwritten rules are the tough ones for newcomers to figure out.

This article is not intended to address all the unwritten rules of vintage racing, but to briefly address one of the more confusing questions which is "do I have a car that can run in vintage events?" Here are a few guidelines to the real deal:

1. The fundamental point of confusion is that many vintage rulebooks are or were written with reference to the 1972 SCCA rulebook. It thus can appear that you car must be pre-1973. But that is not necessarily the case. Not by a mile.

2. If your car is pre-1973 and meets the technical regulations, you are almost certainly good to go. ​

3. If you car is a 1973 or later car, in many cases you are also good to go. You will see all sorts of post-1972 cars running at vintage events. You are better off starting with the assumption that anything can be run. But your should ask the organizers before you show up. ​

4. You should also remember that the organizers are putting on a sort of car show. They don't want any old club racing car to show up and ruin the vibe. Another of their problems is that they don't want Spec Miatas to show up. The problem for them is that Spec Miatas are old, which seems like a fit, but Spec Miatas are not iconclastic. There are a lot of SMs, which reduces variety of what is on track. And SM racers want to race and race hard, whereas vintage is a strict 13/13 kind of operation. Lots of Spec Miatas are pretty fast for their class in life, which makes some other cars look bad. And, see point number 7. SVRA has recently acknowledged that the tide of over 2000 Spec Miatas can't be resisted. They have created the Mazda Miata Heritage Cup as a place for 1990-93 cars to race at selected events.

5. If your car is pre-1973, you will probably find it listed in the rulebook and you can figure out your run group and class. If your car is post-1972, you will probably have some difficulty figuring out where it fits. You should understand that your are often at the discretion/mercy of the organizers as to classification if your car is newer. You may be assigned to an odd grouping from your point of view. Some of this is to balance group size, some of it is because newer cars are not well understood. A lot of it is because there are so darn many different race cars from essentially all of racing history that sorting them into, say, 12 buckets is very very hard. There is also a deep suspicion in vintage technical circles that newer cars run magically faster technology — or they might. Again, the organizers can't possibly know every car in every level of tune. ​

6. If your car is newer, but is historic (see taxonomy chart), you will almost certainly be grouped and classed with as much care as possible. Historic cars are the Platonic ideal for vintage racing, and thus your car is what the organizers really yearn for. However, vintage racing has a certain polyglot element when it comes to newer historic cars — there just aren't that many modern LMP1 cars racing on the vintage circuit. Or V10 F1 cars. Or DTM cars. Or V8 Supercars. Etc. So, you may end up as a class of one. ​

7. Another useful, if possibly mind-bending, aspect of vintage racing is that, while there are races, the spirit of the event really isn't only about competition. You will have a hard time arguing that some change would make for better racing in the traditional club racing sense. The cars are valuable, so there is the 13/13 situation, but beyond that you don't really know the cars you're racing against. So the competition element is a bit fuzzy. That doesn't mean it isn't fun — it is, but it isn't about racing the way club and pro racers think of it. Therefore, it might aid your sanity if you come from club racing to start by thinking of vintage events as multi-car track days, but with wheel to wheel driving, for a bunch of different old-ish race cars. Again, that isn't bad, in fact it is quite engaging. Just don't come expecting it to be like SCCA. Different, but not worse and maybe better, if you have the right intentions.

All Porsche Design products stand for the same precision and perfection, intelligent functionality, and technological innovation. Touch of Modern is currently having a sale on a large selection ending this Saturday, with discounts up-to 50%!

Having had an incredibly high-standard restoration being completed in 2016, partly under the care of Aston Martin Engineering, this is an elegant example being offered for $499,000.