Features I By Christopher Smith I September 15, 2009 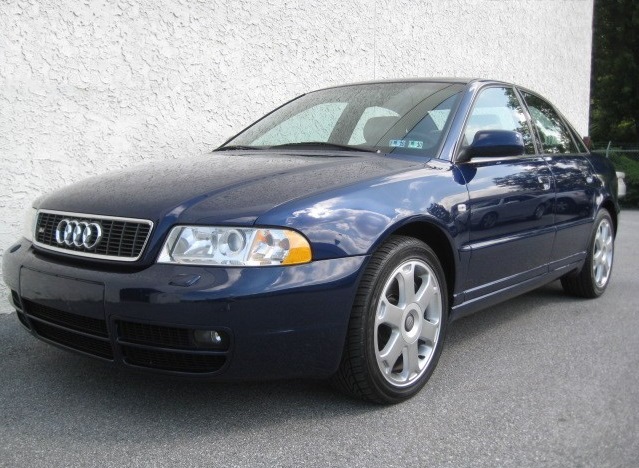 In light of Audi’s all-new unveilings at the Frankfurt Motor Show , the timing couldn’t be better for a flashback to one of the company’s defining performance offerings. We’re speaking of course about the Audi S4 sedan that first appeared on Yankee soil way back in 1992. The formula hasn’t changed much over the years, but when it comes down to a specific S4 genre, we look to the second-generation B5-series S4 as the version that roundhouse kicked the sport sedan segment of the day, becoming a performance legend in the process.

Originally based on the slightly larger Audi 100, the B5-series S4 actually debuted on the smaller A4 platform in 1997. The original S4 concept of turbocharged power with all-wheel drive grip made the transition to the smaller car, though the first-generation, single-turbo five-cylinder engine evolved to a twin-turbo (or Biturbo in Audi speak) V-6 making 261 horsepower. Unfortunately, it would be another three years before American shoppers could partake in this new S4, as Audi didn’t begin importing the car until the new millennium. The U.S. spec S4 also lost a few ponies in the process, dropping the boosted output of the tiny 2.7-liter, 30-valve engine to an even 250. It was still enough to power S4s to 60 miles per hour in well under six seconds, and the choice of a six-speed manual or a five-speed Tiptronic transmission gave enthusiasts a proper interface for gear selection. All-wheel drive grip allowed the S4 to launch like a scalded pig, and though that same system added a significant amount of heft, the car was poised enough to be a welcome companion in the turns, regardless of weather conditions. And lest we leave out the S4 Avant wagon; few things tickle our funny bones like unassuming sleepers, and while the sedan is plenty sedate to go unnoticed, a 150 mile-per-hour station wagon is just…neat.

A significant injustice would be served, however, if we didn’t mention the tuning capability of this machine. The S4 as it stands is a great car, but in reality, its legendary status is owed to the aftermarket, which embraced the turbocharged German like a rabid pack of wolves descending on Red Riding Hood’s unlocked condo. Bounce around the S4 community (which we’ll cover more in-depth a couple segments from now) and you’ll find more S4 tuners than clothing boutiques at the Mall of America. Of course, this excitement wouldn’t exist if the S4 didn’t respond so well to modification. 50-horsepower gains are just a performance chip away, and 11-second daily drivers aren’t uncommon. For these reasons, the B5-series S4 is still extremely popular among the tuner crowd despite a decade of S4 evolution, and with a majority of these cars now available for under $15,000, the price-per-performance factor is huge.

Whether it’s a stock sedan, modified wagon, or some variation in between, the S4 is a machine that every auto enthusiast should experience at least once before death. Yes, Audis of this era can be a bit finicky, but in our next segment of Keepers we’ll help you navigate the minefield of S4 shopping to ensure your bank account lives on.