Blog: A Night With The Nissan Leaf 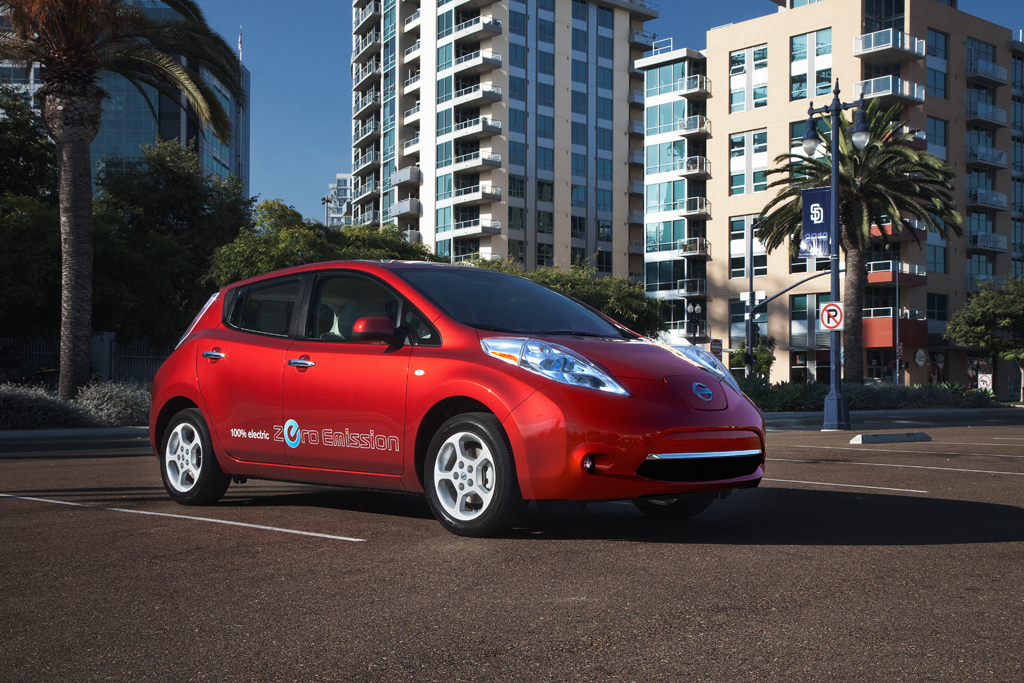 Seyth and John both have twisted senses of humor. Why? They thought it would be a great test to have me take the Nissan Leaf home for an evening. The problem is, I work in Ypsilanti and live in Rochester Hills, which requires me to spend roughly 100 miles per day on the road. That’s 50 miles one way, or half of the Leaf’s overall range. On paper, this looked completely doable. It didn’t leave me any less nervous about the actual range that I’d get in the Leaf though.
Our fully charged tester read 96 miles when I departed. I covered the commute in roughly two hours, and arrived safely in my garage with 37 miles remaining. Now, you may have noticed my 50-mile trip cost me 59 miles. This was thanks to the sustained run down the freeway.
I took the exact same route back to work that I had taken the day before, only I’d thankfully managed to avoid the traffic snarls that come with the afternoon commute. Despite this traffic-free drive though, I arrived at the office with only 32 miles left in the batteries. The downside to the lack of traffic came out in my mileage, as I was able to maintain a higher average speed, and therefore consumed more power.
I ran one charge through the Leaf during my time with it. It originally called for 15 hours of charging, but after a check mid-way through the evening, it estimated a full charge would only end up taking about 13 hours. Regardless, it was fully juiced when I came out the next morning.
My evening with the Leaf revealed a few different things. It will deliver near-as-makes-no-difference 100 miles of pure electric power, meaning it’ll do exactly what Nissan advertises. That doesn’t mean there aren’t some caveats though.
Maintaining concentration when driving efficiently isn’t as easy in the Leaf as in some hybrids. Cars like the Ford Fusion Hybrid turn fuel sipping into a sort of game. As you drive more efficiently, virtual leaves grow in your instrument cluster. Besides giving you a goal with clearly visible results, it makes efficient driving a near thoughtless process. You are trying to get leaves, not save fuel, yet that is exactly what you are doing. There is no such system in the Leaf, which means you are left sitting there, concentrating intently on your throttle/brake inputs and on the traffic conditions around you, trying to eke out as much power as possible. This is neither easy, nor particularly enjoyable.
Not only does the Leaf force you to change your driving style, but it also changes the whole experience of actually being in a car. Things like running the HVAC, or the heated seats, or the headlights, or even the radio can negatively effect your driving range.
Further, the actual process of owning the Leaf, even for a night, was a hassle. Simply going out with some friends was made more difficult because I couldn’t meet them anywhere. I needed them to pick me up because, had I driven, I probably wouldn’t have had enough juice to make it to the office in the morning.
If you drive less than 50 miles per day, then the Leaf might be a great vehicle for you. So-called “range anxiety” only really exists when you don’t know the parameters of the machine you’re dealing with. So, even though I found some limitations with the Leaf’s charge-time/run-time profile, my anxiety was more or less extinguished as soon as I could figure the real-world rules of the game.
Still, in today’s world of constantly running about, the lack of charging stations and constantly being on the go keep the Leaf from being an appealing option to someone like me. Were it my money, I’d spend the extra cash and pick up a Chevroelt Volt because of its higher level of flexibility in my use-case.
Tags:
electric carElectric VehicleevNissanNissan LEAF

Construction Restarts At Circuit Of The Americas